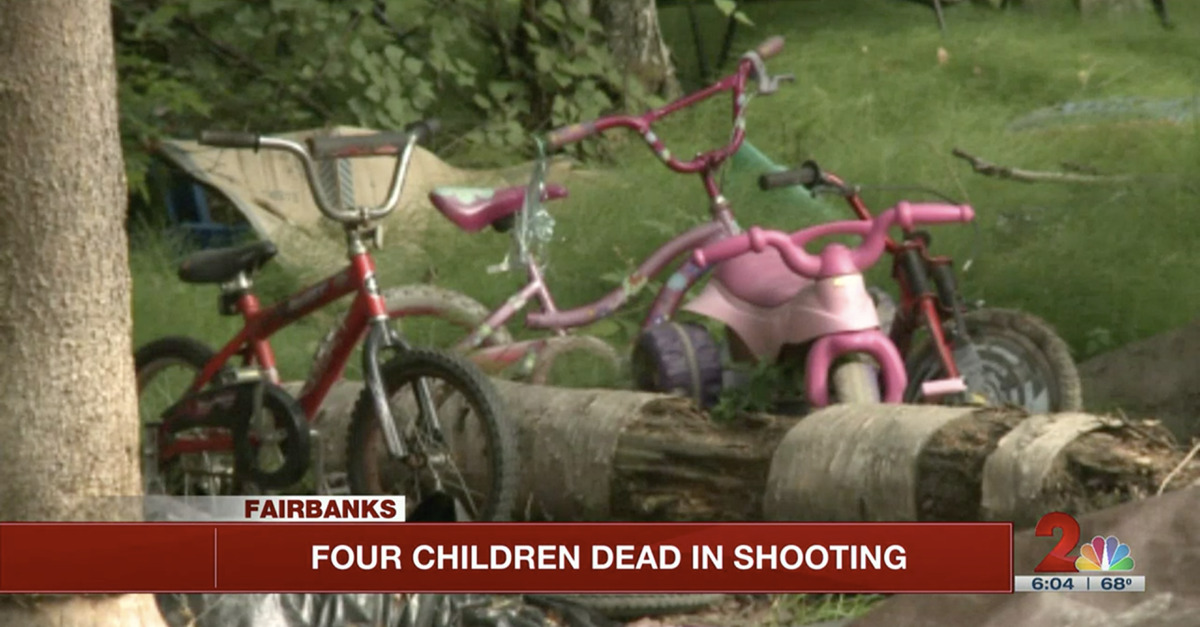 Four Alaska children are dead after a 15-year-old boy killed three of his siblings and then himself, according to the Alaska State Troopers (AST).

The incident occurred on July 26, 2022. Law enforcement received a report of multiple shots fired at a residence in the Skyridge Drive Subdivision in Fairbanks, Alaska late in the afternoon that day.

“The parents of the children were not home when the incident occurred,” the Alaska Bureau of Investigation wrote in an AST daily dispatch. “Three other children in the residence were uninjured.”

An investigation determined the deaths were the result of a triple-murder suicide committed by the 15-year-old who shot his siblings and then himself with an as-yet unidentified kind of firearm as he was “found deceased with an apparent self-inflicted gunshot wound.”

According to Anchorage, Alaska-based NBC affiliate KTUU, the murder victims were ages 5, 8, and 17. The three other children, found alive and uninjured, were all reportedly under the age of seven. One additional sibling was not home when the shooting occurred.

The bodies of the deceased have been sent to the State Medical Examiner’s Office and the Office of Children’s Services has been notified about the incident, according to law enforcement.

The investigation is said to be ongoing.

Details, however, are currently scarce.

According to the Associated Press, the initial report of gunfire was made by a neighbor, citing AST spokesperson Tim DeSpain.

The motive for the horrific slayings is said to be part of the extant investigation. DeSpain told the wire service the gun used was a “family gun but beyond that, it’s all still part of the ongoing investigation.”

The AST spokesperson also declined to say whether the shooter had a prior criminal record and stressed that any such information about the boy’s past would be part of the investigation as well.

The child welfare agency contacted by the AST falls under the purview of the Alaska Department of Family and Community Services.

Clinton Bennett, a spokesperson for the DFCS, reportedly told the AP that his office “will not provide any information due to rules and regulations involving the confidentiality of all involved in specific cases” or “any information involving a case with an open investigation.”

Fairbanks is the third-largest city in Alaska and is located roughly 360 miles north of Anchorage.

The names of the deceased are not being released at this time.

Law&Crime reached out to the AST for additional information but no response was immediately forthcoming at the time of publication.

The full text of the AST dispatch is reproduced below:

On July 26, 2022 at 4:17 pm, Alaska State Troopers received a report of shots being fired at a residence in Skyridge Drive Subdivision in Fairbanks. Troopers responded and found four children deceased from apparent gunshot wounds. The parents of the children were not home when the incident occurred. Three other children in the residence were uninjured. Investigation revealed a 15 year old male shot the three siblings and then shot himself. He was found deceased with an apparent self-inflicted gunshot wound. The Office of Children’s Services has been notified and the bodies are being sent to the State Medical Examiner’s Office. The investigation by Alaska State Troopers is ongoing.