‘He’s Gonna Get Caught’: Search for Shooting Suspect Ramps Up After Police Officer, a Married Father of Two, Dies from Injuries 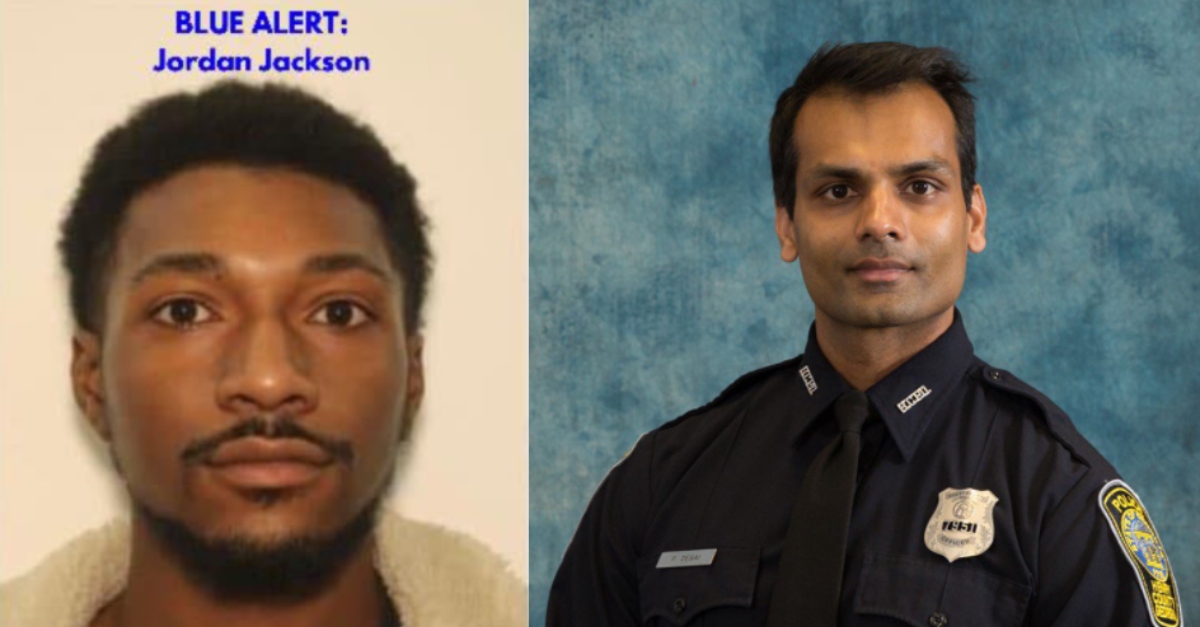 A married police officer and father of two died from his injuries on Monday, and the man accused of shooting him remains on the run.

“No matter where he is, he’s gonna get caught,” Henry County police Chief Mark Amerman told The Atlanta Journal-Constitution on Sunday about suspect Jordan Jackson, 22.

Cops in Georgia previously said that Officer Paramhans Desai, 38, responded on Thursday to a domestic dispute near Keys Ferry Road and Floresta Drive in the city of McDonough.

“Shortly after arriving, the officer attempted to arrest the suspect when the officer was shot,” police said. “The suspect, identified as Jordan Jackson, fled the scene in a white in color 2016 Honda Civic, Georgia license plate RXF0384.”

Police described Jackson as Black, standing 5’8″, and weighing approximately 165 pounds. He is considered armed and dangerous, they said.

Desai initially survived the shooting, with police initially describing him as being in “critical, but stable condition” at Grady Medical Center, but they later announced that he died Monday night.

“It is with a saddened and heavy heart that the Henry County Law Enforcement Family along with Henry County Government announce the passing of Police Officer Paramhans Desai,” authorities said. “Officer Desai succumbed to his injuries with his family by his side today at approximately 9:55 p.m.”

The reward is up to $60,000, including money from Inside the NBA co-host and retired basketball star Shaquille O’Neal, who joined the Henry County Sheriff’s Office in January as director of community relations.

Desai is survived by his wife and two young children, officers said.

“Officer Desai continues to serve, even in his passing, by donating multiple organs which will save numerous lives,” police said. “Please continue to keep Officer Desai’s family in your thoughts and prayers through this terrible tragedy.”

Those who want to help support Desai’s family can make donations. From cops:

Donations can be sent via Cash App to: $Wings4Warriors

Meanwhile, the search for Jackson continues. Cops on Tuesday released pictures of him that they said were from Desai’s body cam.

The Georgia Bureau of Investigation is the primary investigating agency in the case. Any information on the whereabouts of Jordan Jackson, please call the Henry County Non-Emergency Dispatch at 770-957-9121 or call 911. Anonymous tips can also be submitted by calling 1-800-597-TIPS(8477), online at https://gbi.georgia.gov/submit-tips-online, or by downloading the See Something, Send Something mobile app.