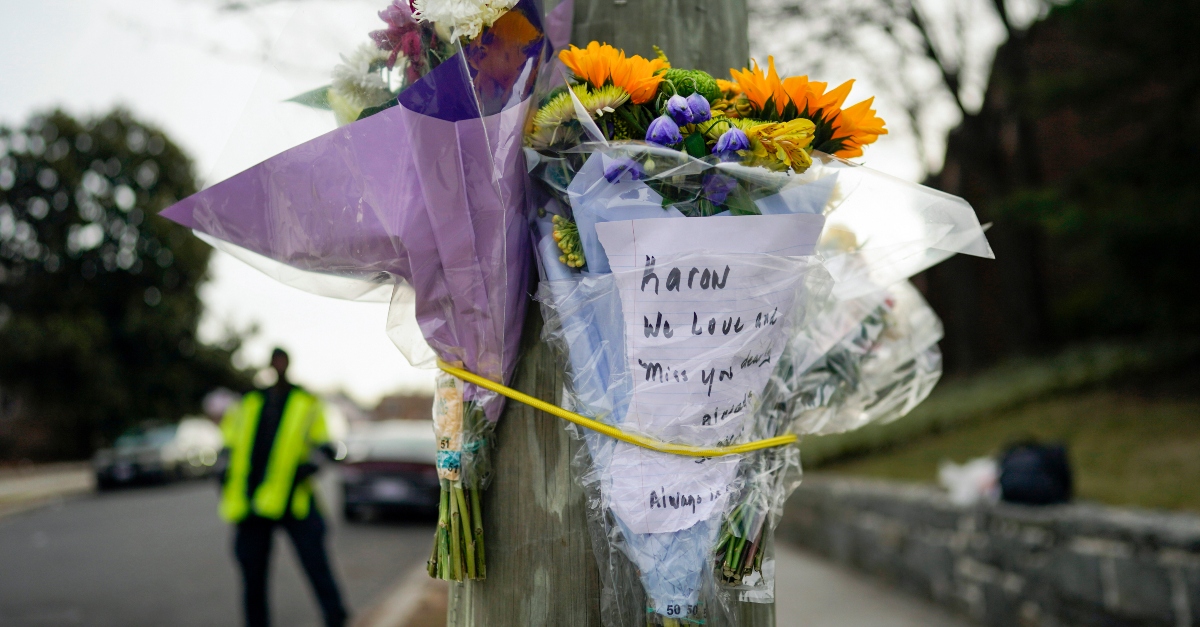 Flowers are secured to a pole as a memorial to Karon Blake, 13, on the corner of Quincy Street NE and Michigan Avenue NE in the Brookland neighborhood of Washington, Tuesday, Jan. 10, 2023. The note reads, “Karon we will love and miss you dearly.” Karon Blake was shot and killed on the 1000 block of Quincy Street NE early morning Saturday, Jan. 7, 2023. (AP Photo/Carolyn Kaster)

Person involved is Black man and “not law enforcement.”

Cops previously said that detectives were working with prosecutors to review the case for any potential charges. Blake was found dead early Saturday morning in the 1000 block of Quincy Street.

“At approximately 3:56 am, members of the Fifth District responded to the listed location for the report of a shooting,” officers said. “Upon arrival, the members located a juvenile male victim suffering from apparent gunshot wounds. DC Fire and Emergency Medical Services responded to the scene and transported the victim to an area hospital. After all life-saving efforts failed, the victim was pronounced dead.”

Police said a man shot and killed Blake after an “interaction.” They said the man saw someone he thought was tampering with vehicles.

“Detectives’ investigation at the scene revealed that a male inside of a residence, at the listed location, heard noises and observed someone that appeared to be tampering with vehicles,” police wrote. “The male resident went outside, armed with a registered firearm, to further investigate. There was an interaction between a juvenile male and the male resident. During the interaction, the male resident discharged his firearm striking the victim. The victim was transported to a local hospital where he succumbed to his injuries.”

The family shared this photo of Karon Blake today and called for accountability in the case, saying his death shouldn’t have happened.

“A child. You shot him three or four times. And for what?” pic.twitter.com/y43Uwy56CB

Public pressure mounts, including from local members of the city council.

“No car or material possession is worth a life – under any circumstances,” Councilmember Zachary Parker of Ward 5 said on Monday. “I join Ward 5 residents in calling on the Metropolitan Police Department and the U.S. Attorney’s Office to hold accountable the individual who took Karon’s life.”

“I am heartbroken for Karon Blake, his family, and his community,” said Councilmember Janeese Lewis George of Ward 4. “And I am appalled by rhetoric that seeks to justify his murder. The life of a child will always be more important than property.”

“When I was 13, I got into a lot of trouble,” said At-Large Councilmember Robert White. “Made a lot of bad choices. And lived to learn from them. A lot of us did. Karon was shot dead. His family lost a child, and his friends are hurt permanently. This can’t be who we are as a city.”

“Additionally, anonymous information may be submitted to the department’s TEXT TIP LINE by sending a text message to 50411,” officers wrote.