Florida Family Allegedly Beat, Blinded, and Almost Killed a Man Because of Same-Sex Relationship with Son 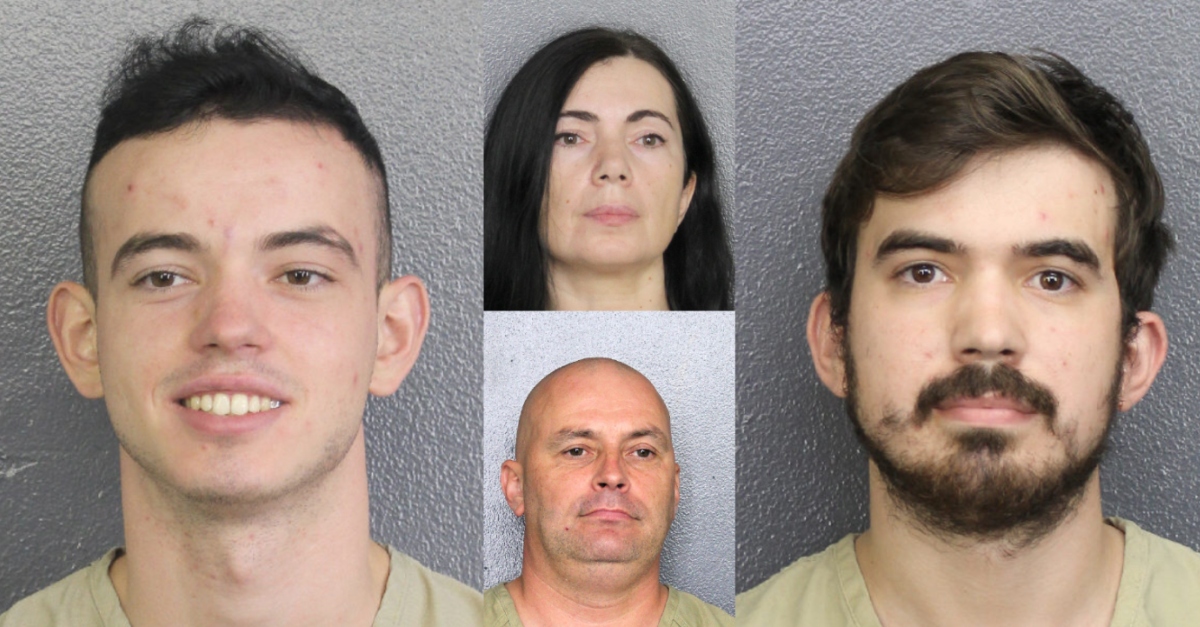 Deputies say that Oleh Makarenko (left) was in a relationship with a man, but he turned against him after his parents Inna (top center) and Yevhen (bottom centner) Makarenko found out about it. Oleh, his parents, and his brother Vladyslav Makarenko (right) allegedly attacked the victim in the latter man’s Broward County apartment, leaving him so badly beaten he lost his eyesight.

A Florida family has been accused of brutally beating a gay man for dating one member of the family. Father Yevhen Makarenko, 43, mother Inna Makarenko, 44, and son Vladyslav Makarenko, 25, are all held at the Broward County Jail with son and co-defendant Oleh Makarenko, 21, who deputies reportedly say had a relationship with the victim. The charges are attempted murder in the first degree, kidnapping, and burglary with assault or battery.

Yevhen, Inna, and Oleh Makarenko were first arrested in March, with Vladyslav being transferred from from Alabama the following month. But prosecutors recently filed hate crime enhancements against the parents and Oleh, with Broward State Attorney’s spokesperson Paula McMahon telling Law&Crime that formal charges are forthcoming against Vladyslav Makarenko.

“The victim, 31, of Pompano Beach, was severely beaten during an incident that occurred in the city on or about August 6, 2021,” said prosecutors with the Broward State Attorney’s Office on April 12. “He has been permanently blinded and sustained other serious injuries as a result of the incident.”

Authorities did not release the victim’s name, saying he invoked the state’s version of Marsy’s Law, a crime victim advocacy measure.

According to investigators, the man said he dated Oleh — a.k.a. “Alex” — starting in November 2020.

“[The victim] stated that Oleh had a key to his apartment, had been there numerous times, and even slept there many nights,” authorities wrote.

But in July 2021, the couple stopped speaking for two weeks after an argument over the phone, and the victim discovered texts stating Yevhen Makaranko discovered the Oleh was gay and in a relationship with a man.

“[The victim] then made phone contact with Oleh who advised him that his father was now treating him poorly and was not accepting him,” authorities said. “He also advised that his mother was going to force him to marry a woman.”

Investigators did not name this woman, but Oleh Makarenko’s fiancée reportedly insisted he loves her and she maintained that his family would never attack a man for being gay.

“I don’t believe it at all; I have proof,” Christina Herman told WPLG in a Wednesday report. “I wear a ring which is an engagement and one kind of marriage ring. I know Alex has his ring in jail. That is proof to me. I know we are in a relationship.”

Authorities said that the Makarenkos, including Oleh, went to the victim’s apartment on Aug. 6, 2021, forced their way inside the home, and attacked him. Oleh had allegedly called the victim, asking for the address, which the victim believed was strange since Oleh had been over at the apartment many times. The man gave him both the address and the gate code, according to the version of events alleged by the authorities.

The Makarenko family soon arrived at the man’s apartment and attacked him, officials said.

The arrest warrant appears to note that two other people–including yet another Makarenko brother–were at the scene of the crime, but their names are redacted from documents.

“Unfortunately, your son’s gay,” the man told Inna during the attack, according to the paperwork.

Besides blindness, the victim’s injuries included brain swelling, a concussion, a blood infection, a fractured jaw, and “severe bruising and swelling,” authorities said.

Finally, the man played dead, authorities said. The family left him, and he remained on the blood-covered floor for about 13 hours, authorities continued. Deputies said they found the man after responding to the apartment complex for an unrelated incident and found the door to his apartment ajar. The man was intubated for approximately three weeks, officials added. He did not initially tell investigators about the attack until months later — saying in February that his memory returned and that he wanted to press charges, according to deputies.

“He stated that the reason for this attack was because he was a homosexual, was dating Oleh and that the family felt that he made Oleh a homosexual,” the warrant reportedly said.

The man initially told investigators at his bloodied and damaged apartment that he had fallen down stairs, according to officials.

Makarenko attorney Michael Glasser told WFOR that the victim told inconsistent stories. According to Glasser, the victim first told police he was drunk and fell, then months later said he was in a relationship with Oleh.

“When asked,” Oleh’s arrest warrant said, “[The victim] stated that he told deputies this because he was afraid, and did not want to get Oleh in trouble.”

“Many, if not all of them, didn’t even know this person in any way, shape, or form,” Glasser said. “Thus far, there’s really been scant, and borderline nothing, remotely compelling that points to this family having anything to do with this poor guy’s injuries.”

The arrest warrants for the four defendants are all below.