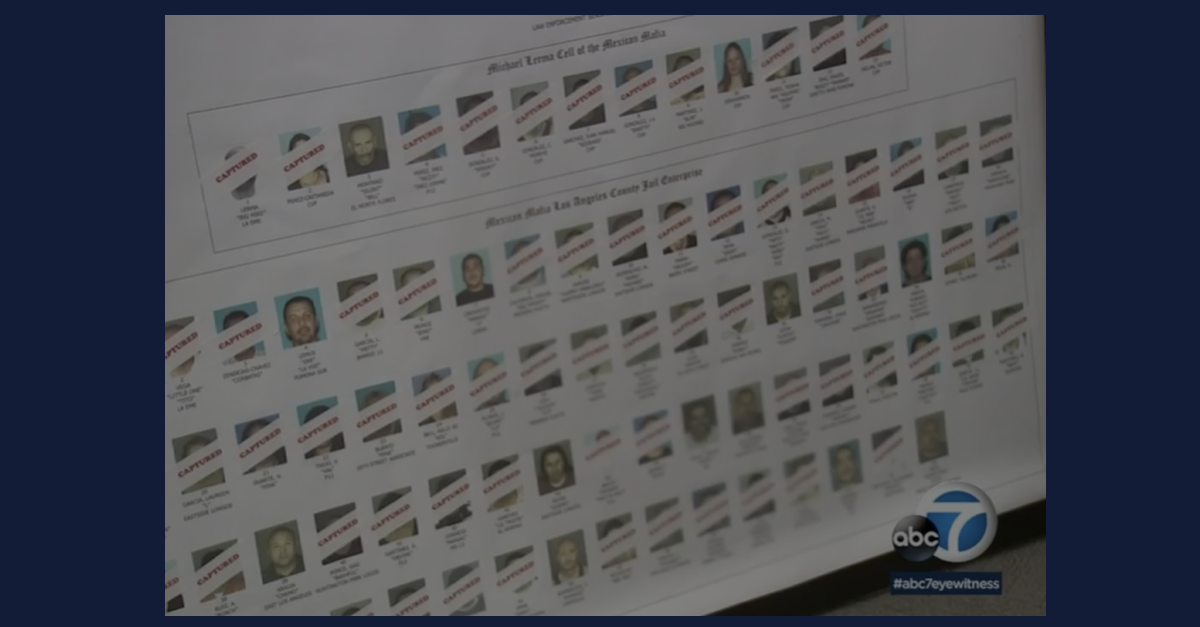 This poster of mugshots was displayed during a 2018 press conference about federal indictments targeting the Mexican Mafia in the Operation Dirty Thirds investigation. (screenshot from ABC7 video)

A former Sureño gangster and Mexican Mafia ally who helped control Los Angeles jails from the inside testified Monday that a lawyer provided a crucial bridge between members incarcerated in different prisons, relaying messages about potential murder plots and other key business decisions.

Luis “Hefty” Garcia, 43, is the star prosecution witness against indicted attorney Gabriel Zendejas-Chavez, describing in his two days on the stand Chavez’s work as a facilitator for the Mexican Mafia who used his status as an attorney to secure private access to members in the most restrictive prisons in the nation.

He said Monday he hopes to shed a possible life sentence for attempted murder through his testimony, though he vowed to “take responsibility” for all his past crimes, including an uncharged attempted murder to which he confessed during cross-examination.

“I wasn’t expecting you to have me exactly name the name,” Garcia told Chavez’s lawyer, Meghan Blanco. But, he added, “now that I’ve named a name of someone I’ve assaulted in the past, I’m willing to accept responsibility.” 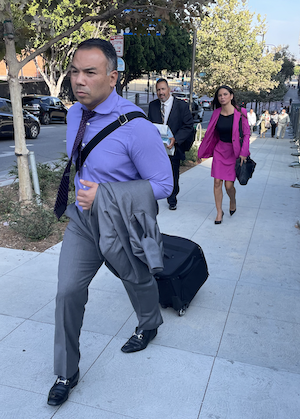 Garcia and Chavez were among 83 defendants charged in two indictments announced in May 2018 by federal prosecutors as part of a years-long investigation dubbed Operation Dirty Thirds, which refers to a tax they say the Mafia imposed on drug sales inside the jails.

With his own plea agreement already in, Garcia could earn a reduction in his sentence through his work with prosecutors against Chavez. In testimony on Friday, the former top-ranking Sureño gang member in the LA jails answered that a rat is “a person who is doing what I’m doing now.”

The U.S. Attorney’s Office for the Central District of California has pursued several high-profile prosecutions of the gang in recent years, including a 33-count, 31-defendant indictment announced in April against the Orange County Mexican Mafia that’s yet to see much court time. The occasional trials offer a rare look at the inner-working of one of the nation’s most ruthless and controlling criminal enterprises, founded in California state prisons in the 1960s with 140 current full-fledged members and a broad underworld of allies.

Chavez’s trial provides one of the rarest, though he is not the first lawyer to face accusations of helping the Mexican Mafia: An LA federal jury in 2012 convicted disbarred attorney Isaac Guillen of money laundering and racketeering charges for his work with the Mafia and its underlying 18th Street gang. He was sentenced to nearly seven years in prison.

Chavez appears to have taken over for Gullien, as prosecutors tell it, becoming a top-ranked facilitator just like Garcia. Bernstein described in his opening statement how Chavez helped smuggle drugs into the jails, hunted down informants and obtained paperwork through his status as a licensed lawyer that aided the Mexican Mafia’s decision-making regarding violence and its control of lucrative drug markets. Chavez also hosted Mexican Mafia meetings at his law office as well as his family’s Mexican food restaurant, prosecutors say, and members sometimes referred to him as “la corbata,” which is Spanish for “the tie.”

Chavez also is accused of helping manage what prosecutors described as an extortion plot against the Mongols motorcycle club that involved forcing the group to pay $100,000 to be removed from the Mexican Mafia’s kill-on-sight list but required broad consensus from Mafia membership.

Gangs such as Garcia’s Sureños and the MS-13 — pushed by now-former President Donald Trump as a dire national security threat — answer to the Mexican Mafia, also known as La Eme. The group has strict rules and a chain of command that includes secretarial roles, with Garcia testifying he had “numerous secretaries” helping him from the outside when he was running the LA jails as an inmate with Mexican Mafia member Jose “Fox” Landa-Rodriguez because “there was a lot to do.”

Garcia said he often met with Chavez under the guise of an attorney-client meeting, and he’s testified that Chavez provided a fast way to communicate with members in the maximum security Pelican Bay State Prison in northern California as well as the highest-security federal prison in in the United States, ADX Florence in Colorado.

Puppet and Champ’s input, Garcia testified, was key to crucial Mexican Mafia governing decisions such as who to eliminate from the group by means of murder, but the supermax restrictions meant “communication with some of these members is very difficult if not impossible.”

“Besides Mr. Chavez did you have any means of communicating with the Mexican Mafia members in ADX Colorado?” Bernstein asked on Friday.

Gullien, the attorney convicted 10 years ago, also had used his privileges to travel to ADX Florence to pass messages with Martinez.

In the custody of U.S. marshals but wearing a light-colored, long-sleeved collared shirt with eyeglasses, a shaved head and a mustache, Garcia continued his testimony Monday, describing phone calls with Chavez and their discussions about contacting Champ at ADX Florence and other business. He never seemed reticent, at one point eagerly asking Bernstein, “You want me to finish?” before the prosecutor said he’d ask another question first.

Garcia said Chavez also communicated messages to he and Landa-Rodriguez from influential Mafia leaders imprisoned at Pelican Bay, including that two men who’d long controlled the Wilmington neighborhood of south LA felt a man known as Lil’ Man who had started “collecting rent” through extortion “was taking money from them.” Chavez passed the message to Garcia and Landa-Rodriguez that the men at Pelican Bay, one nicknamed Sleepy, wanted Lil’ Man to “slow his roll,” Garcia testified.

“When we discussed these things, it’s like if me and another person were discussing this cup of water here,” Garcia testified, referencing a court-provided water cup. “It’s just a regular conversation.”

Garcia also spoke with Chavez about delaying trial in his attempted murder case because Garcia didn’t want to leave for prison if convicted and give up his lucrative position running the jail with Landa-Rodriguez. He said Chavez was to help persuade the victim, an inmate nicknamed Chubs who Garcia had stabbed in 2013, to recant his identification of Garcia as his assailant. Garcia testified that while surveillance video clearly showed him stabbing the man, “We were just going to try to make it difficult for the district attorney that was prosecuting me.”

“I knew I wasn’t going to get off the charge,” Garcia said. “The goal was to get me a better deal.”

Garcia was facing a potential life sentence for attempted murder over the stabbing when he told the Los Angeles District Attorney’s Office in early 2014 that he wanted to speak with the FBI. In the ensuing meeting, according to testimony, Garcia told agents of an attorney who was close with now-deceased Mexican Mafia leader Richard “Peanut Butter” Ruiz and was helping him and Landa-Rodriguez with key Mafia business.

Garcia also gave federal agents a collection of notes mentioning Chavez – called “kites” in prisons and jails – that he and Landa-Rodriguez had passed between their neighboring cells in the most restrictive area of the Los Angeles County Men’s Central Jail.

Prosecutors told jurors that Garcia is eligible for a reduced sentence if he testifies truthfully. A plea deal filed in December 2020 has him pleading guilty to a racketeering conspiracy charge that encompasses the attempted murder, but it does not appear that he has formally entered the plea. He testified Monday that he also pleaded guilty in 2014 to separate attempted murder and arson cases in Los Angeles County Superior Court that carry life sentences, but, eight years later, he still hasn’t been sentenced.

Jurors have seen several of the jail notes throughout Garcia’s testimony, including one in which Landa-Rodriguez wrote, “I know the lawyer is legitimate and a friend.”

Garcia is expected to continue testifying into Tuesday, Blanco getting about 30 minutes of cross in before the hour-long lunch break at 12:30 p.m. Pacific on Monday. She pressed Garcia about his cadre of crimes and the leniency in sentencing that he hopes to earn through his testimony.

“Who else did you try to kill?” Blanco asked.

“There’s been so many, so as far as names, I can’t recall exactly the names,” Garcia answered.

“You’ve tried to kill people and you don’t know their names?” Blanco asked.

“If happens often in my lifestyle, and the life I lived before,” Garcia answered. He added: “I wouldn’t be able to get into the position I was in had I not participated in these kinds of acts. It’s part of who the Mexican Mafia is.”

Blanco said in her opening statement last Wednesday that Chavez’s popularity with the Mafia stemmed from the great lawyering he did for Ruiz, securing his release from a drug-related life sentence. Ruiz, also known as Chino, died in 2016.