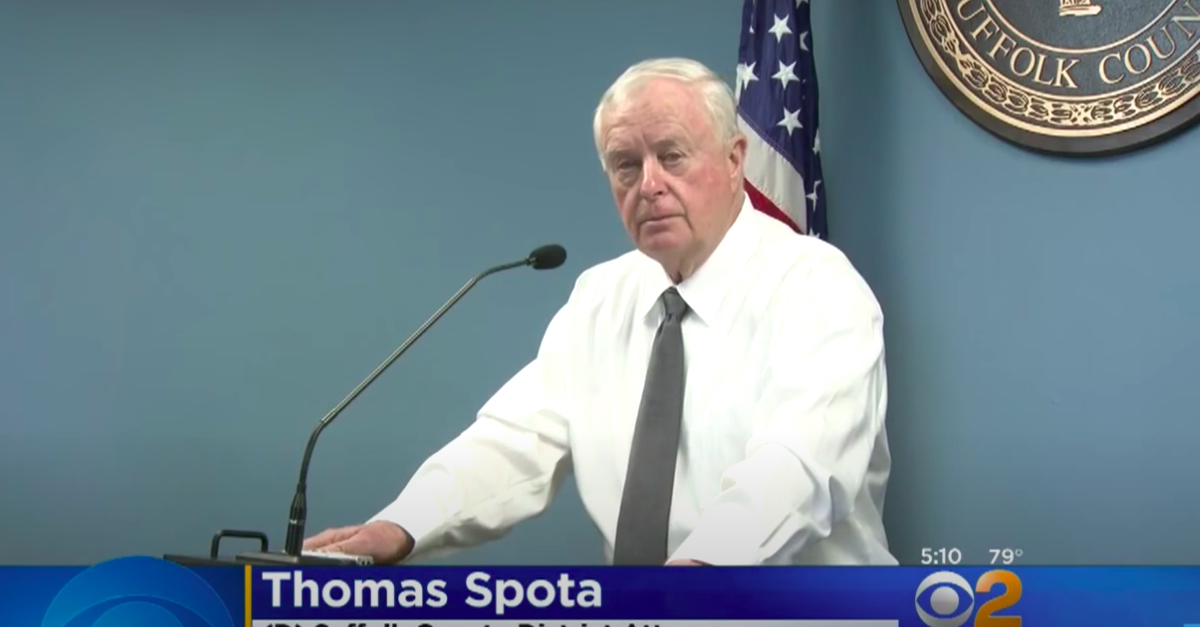 A federal judge in New York on Tuesday sentenced one of Long Island’s former top prosecutors to five years in prison for his role in covering up the brutal police assault of a handcuffed prisoner who was accused of stealing a bag sex toys from a car belonging to the chief of police.

U.S. District Court Judge Joan Azrack handed down a 60-month sentence to ex-Suffolk County District Attorney Tom Spota, who in Dec. 2019 was found guilty of several crimes, including witness tampering and obstruction of justice. Additionally, Spota was ordered to pay a fine of $100,000.

According to a report from Newsday, the 79-year-old Spota, who was indicted in 2017, told Judge Azrack that his conviction was “the lowest point” of his life and that his only hope now was to “not to die in prison alone.”

“I’ve also left [my family] with a shattered legacy and the stain of being a convicted felon,” the disbarred Spota said. “My family will forever be marked by my disgrace.”

Spota’s troubles began in Dec. 2012, when Suffolk County Chief of Police James Burke—Spota’s onetime protégé—discovered that someone had broken into his car and stolen a duffel bag containing his gun belt, sex toys, pornography, Viagra, and cigars. A few hours later, officers arrested a known heroin user who had the bag in his possession and handcuffed him to the floor in the station’s interrogation room. When the suspect learned who Burke was, he allegedly taunted the chief, calling him a “pervert,” which reportedly caused him to fly off the handle.

“For a few minutes, prosecutors said, Mr. Burke assaulted the suspect, screaming and threatening to kill him until a detective in the room finally said, ‘Boss, that’s enough,’” according to a report from The New York Times.

Following the vicious assault, prosecutors say that ordered all of the highest-ranking officers in the Suffolk County Police Department to close ranks and ensure that any “officers who had witnessed the assault would never reveal what they had observed,” according to a report from The Associated Press. Burke then recruited Spota and McPartland, both of whom were his personal friends, to help conceal what had happened.

During Spota’s trial, an officer testified about a 2015 meeting held in Spota’s office where the then-district attorney discussed how to combat the federal probe into Burke’s assault. The officer said Spota ordered him to find out whether anyone in the department had “flipped” on Burke.

“Somebody’s talking. You better find out fast if it’s not too late,” Spota said, according to the AP.

Burke was sentenced to 4 years in prison after pleading guilty in 2016. He refused to testify against Spota and McPartland at their trials.

“When a sitting District Attorney and one of his top prosecutors are corrupt and use their power to intimidate witnesses and cover up a brutal assault by a high-ranking law enforcement official, they not only jeopardize the safety of citizens who are entitled to the protection of the law, they also undermine confidence in the integrity and fairness of our criminal justice system,” she said.

“Instead of serving the people of Suffolk County, these defendants brazenly abused their exceptional positions of power and public trust to protect their friends and hurt their enemies. With today’s sentences, justice has been served and the defendants have learned the consequences of their crimes, just like anyone else who has broken the law.”

An attorney for Spota did not immediately respond to an email from Law&Crime.