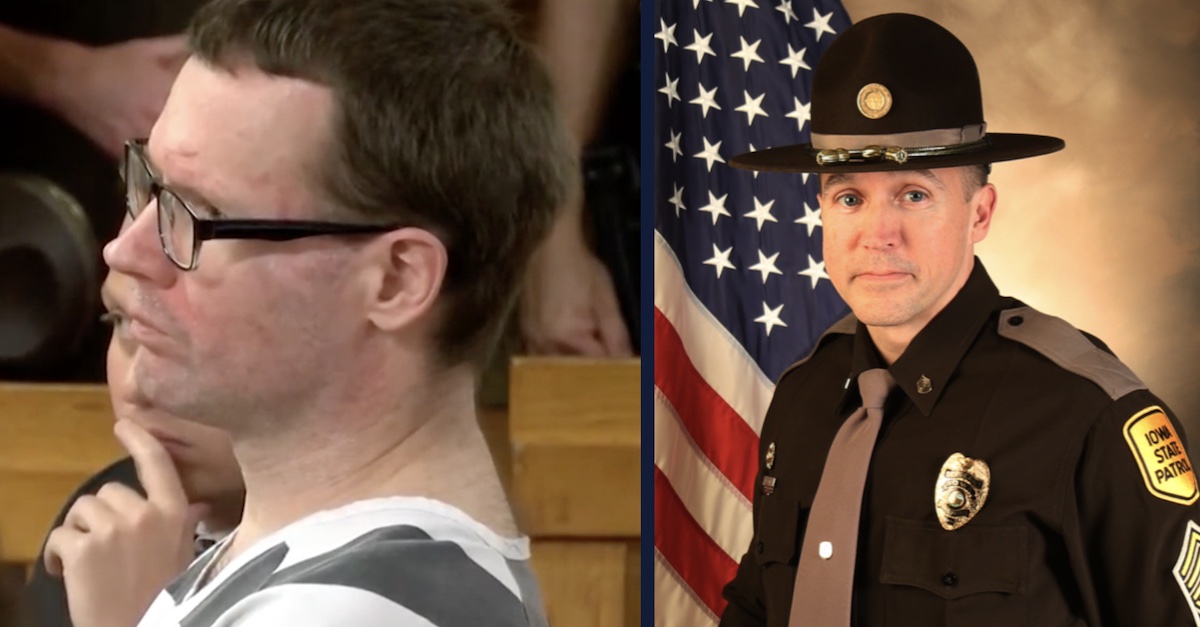 An Iowa man was sentenced to life in prison Monday following his conviction last month for murdering a state trooper.

Michael Thomas Lang was found guilty in a Grundy County courtroom back in May of first-degree and other charges in the death of Sgt. Jim Smith, a 51-year-old husband, father, and 27-year veteran of the Iowa State Patrol (ISP).

District Court Judge Joel Dalrymple handed down the sentence of life without parole, plus 25 years for attempted murder and five more for assaulting a peace officer, the Des Moines Register reported. The sentences will be served concurrently.

Authorities said in the complaint the shooting occurred on April 9, 2021, when Lang fled from an attempted traffic stop, assaulted a Grundy Center police officer, and eventually barricaded himself inside a residence.

“During the assault, Lang yelled, ‘shoot me’ multiple times to the Officer. Lang disarmed the officer of his Taser, removed his radio and put the Officer in a chokehold,” the complaint said.

Sgt. Smith was one of the law enforcement officers who subsequently entered the residence Lang had entered. The suspect, however, had grabbed a shotgun and opened fire.

Authorities said fellow officers pulled Sgt. Smith from the residence, but he did not survive. On the other hand, the suspect remained barricaded inside the residence for hours and was accused of expressing his desire to shoot more cops. Authorities said Lang even laughed and joked about the fatal shooting.

Sergeant Smith began his career as a member of the Department of Public Safety’s 19th Basic Academy in 1993. Upon graduation, he was first stationed in Fairfield at District 13, and in 1996 relocated to District 10 located in Oelwein. Trooper Jim Smith was proud and humbled by his position as an Iowa State Trooper. He consistently performed his duties everyday with the motoring public safety, which was his number one priority, along with having the “I can make a difference” mindset. He took on the role of leader with the Area C Tactical Team, devoting time on and off duty, to complete the tactical team mission.

“How will I live without my husband? Jim was always there for me and for our kids. Our future dreams and plans together will never be. I didn’t blame God for what happened,” Kathy said, WHO reported. “Evil people do evil things. I only blame this man.”

Jazlyn reportedly said that Lang “took away my best friend.”

“My dad was the most comedic, selfless, encouraging, understanding, and God-honoring person I have ever, and will ever, meet,” she said.

Smith’s obituary said that he was also survived by his son Zander Smith.

“Jim will be greatly missed by everyone who knew him. He was an upholder of justice, a loving husband and father, a comedian, a humble man of God, and a superhero,” the obituary said. “To this day, nobody has seen Batman and Jim in the same room.”

During the Monday hearing, Zander reportedly said Lang showed not even a “sliver of remorse.” Still, he cited his father’s faith and encouraged the convicted killer to repent.

“I am trying to learn how to forgive you,” Zander said, according to the Des Moines Register. “But I know that if you repent God will forgive you in an instant.”