Evicted, Armed Tenant ‘Very Evilly’ Started Fire at Rental Complex So He Could Ambush Others Who Were Fleeing the Scene: Police 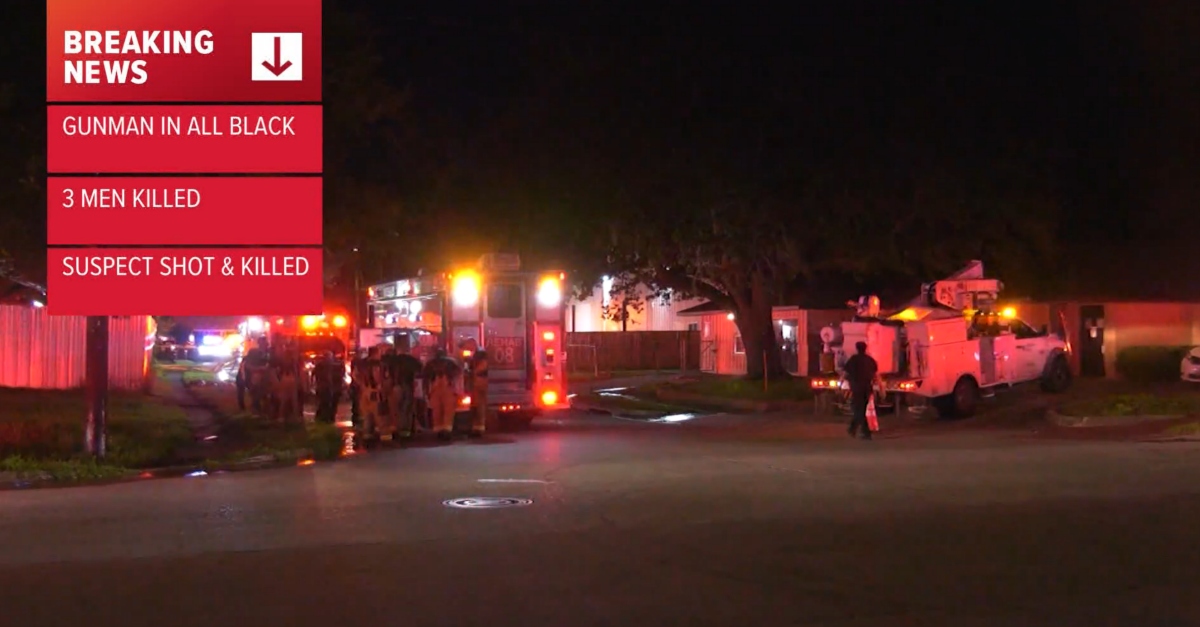 Four people are dead after one of them started a fire at a rental complex and shot at fleeing people overnight, according to cops in Houston, Texas. A local police officer killed the suspect, authorities say.

Houston Police Chief Troy Finner did not identify anyone involved in a press conference early Sunday. He only said the suspect was an African American man, age 40, armed with a shotgun and dressed all in black.

The slain victims were:

A male survivor, age 40 to 50, was taken to a hospital because he was shot in the arm, the chief said. Another man was not taken to the hospital. He was injured,  but it was minor, Finner said.

The chief said at approximately, 1:07 a.m. on Sunday, there were multiple calls, including one for a person down, another as a shooting, and then a fire call.

“This suspect unfortunately and very sadly and very evilly set fire to several residences, laid wait for those residents to come out and fired upon them ,” he said.

The suspect allegedly discharged his shotgun as fire department officials arrived, but Finner said he was not sure if the man as firing at their direction. They nonetheless had to take cover. An HPD officer arrived, spotted the suspect across the street in a parking lot, engaged him and shot him, the chief said. This is remains under investigation and the officer, a 7-year veteran, is on administrative leave because of policy. Finner credited him.

“Our officer arrived and took action,” the chief said. “And for that I’m very proud of him.”

He said the incident remains under investigation but noted the suspect, a longtime tenant at the facility, was recently told of an eviction.

“That may have been a trigger point for him, I don’t know,” said Finner, cautioning that he was speaking in the early part of the case. “But that’s part of the investigation.”

The facility’s landlord, who asked to speak to KTRK only off-camera, said the suspect had been evicted and turned in his keys on Saturday. He lived there since 2013 but did not pay rent, the landlord reportedly said.

The landlord described one of the victims as the property manager there for 33 years. The slain man’s German Shepherd “Duke” ran away during the incident, he said.

He estimated 10 of the units are uninhabitable.

When asked by a reporter, Finner said that the suspect’s mental health history is under investigation.