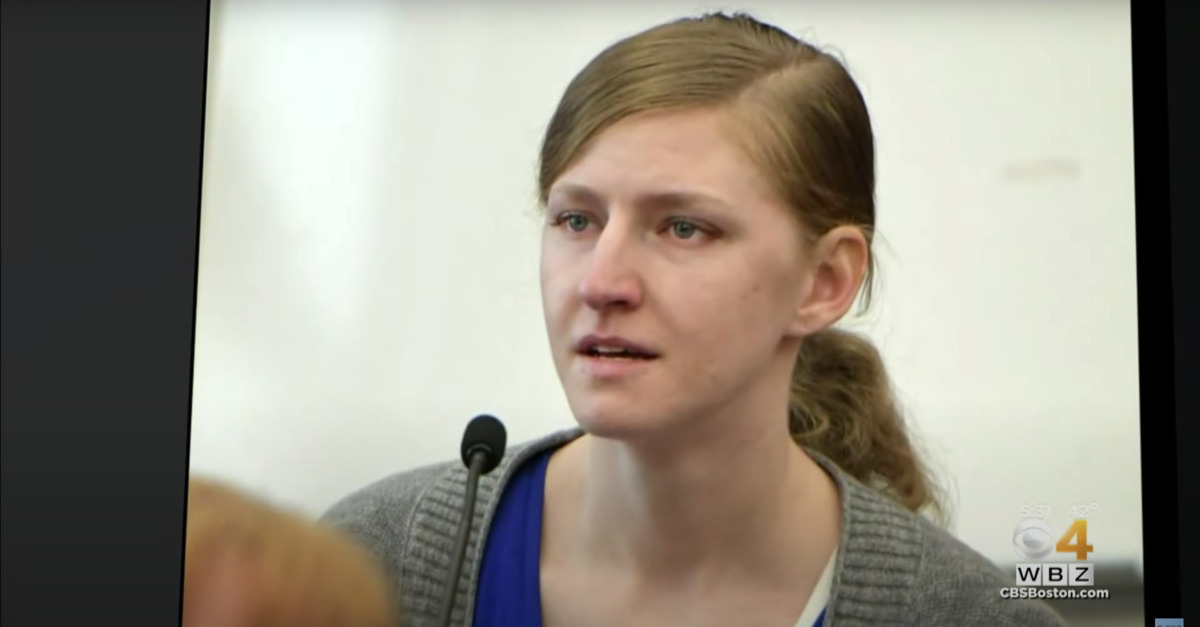 A Worcester Superior Court jury in Massachusetts found the young woman guilty of murder in the second degree after a trial that spanned just over three weeks–11 days in total.

Deliberations began last Tuesday afternoon and were suspended on Wednesday afternoon for the long holiday weekend. By Monday morning, the defendant was convicted of killing 20-year-old Brandon Chicklis, a former classmate and boyfriend, on June 23, 2018.

According to MassLive, the defendant “stood motionless” as the foreperson read the determination of her fate aloud.

“She later placed both hands behind her back as a court office put handcuffs around her wrists and she was escorted out of courtroom No. 10,” journalists Melissa Hanson and Michael Bonner noted. “Enright’s family declined to comment on the verdict. Chicklis’ family was not made available to speak to reporters.”

Worcester County District Attorney Joseph D. Early Jr. said “justice was served” with the verdict but cautioned that a formal conviction and systemic justice was simply that: the process playing out and no real substitute for what the victim’s family would have preferred.

“They were relieved,” he said, according to the outlet. “But the thing you want to give them, you can’t give them and that’s Brandon back.”

The deceased man’s body was found by a jogger on July 10, 2018. The corpse was in an advanced state of decomposition by the time it was discovered–which became a key point of discussion during the trial.

Against the defense’s wishes and objections, Enright’s hobbies and side business took center-stage during the prosecution’s case.

One such hobby was her preference for what dead animal enthusiasts refer to as “wet specimens,” or, the corpses of small animals preserved in glass jars. One witness testified that Enright would occasionally seek to hasten a dead animal’s decomposition process by leaving the creature’s body out in the elements and wrapped in a tarp.

As Law&Crime previously reported, Worcester County Medical Examiner Jennie Duval told jurors that Chicklis’s body was found wrapped in a blanket, a tarp and a canvas sheet–all of which were duct-taped together inside sealed shut plastic garbage bags. The parallel impressions sought by the prosecution were obvious there.

“I just have an insatiable curiosity to kill a person,” the convicted killer wrote–and read as she took the stand in her own defense.

To hear Enright tell it, her “surprise” for Chicklis went awry on the day in question when he started to attack her sexually. A death by knife ensued. The deceased man was stabbed at least 10 times inside the Enright family’s Ashburnam, Mass. treehouse before his body was dumped off the side of a highway in New Hampshire.

The defendant said her boyfriend, who has not been charged in the killing, helped her hide the body after the bloody incident.

As the trial drew to a close, prosecutors focused on that man, John Lind, with whom she allegedly shared her macabre fantasies–arguing that the Chicklis murder was, itself, a “gift” for her beau.

According to the Telegram & Gazette, Enright texted Lind about a “blood bath” in the minutes before Chicklis was sent his last ever invite. In the days after the killing, the defendant penned a blog post that suggested she was “turned on” by the gruesome scene inside the treehouse but expressed remorse that Lind wouldn’t appreciate the “gift” she had given him, the prosecution alleged.

Enright, for her part, said that blog post was about a grave-robbing she had committed several days after Chicklis had died.

Her occult-like interests, the defendant insisted, were simply a side effect of her then-obsession or “fixation” with recording artist Marilyn Manson, she told jurors, in the end, altogether unconvincingly.