‘QAnon Shaman’ Recently Sentenced to Prison Now Has a New Lawyer, May Claim Ineffective Assistance of Counsel on Appeal 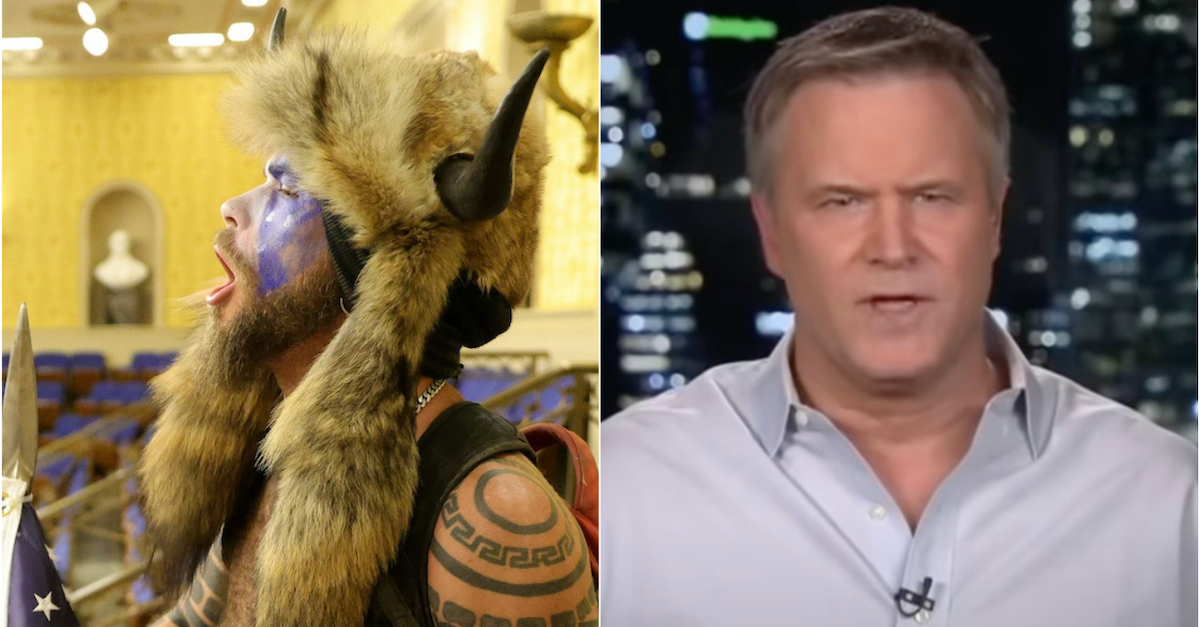 The recently sentenced so-called “QAnon shaman” who has been referred to as the “very image” of the Jan. 6 attack on the U.S. Capitol has a new lawyer—and apparently plans to appeal.

Jacob Chansley, attorney Albert Watkins, and attorney John Pierce all appeared for a hearing before Senior U.S. District Judge Royce Lamberth on Monday in order to settle the confusion over just who exactly is representing Chansley.

Watkins was Chansley’s lawyer through his plea deal and sentencing for obstruction of an official proceeding. On Nov. 17, Lamberth, a Ronald Reagan appointee, ordered Chansley to serve more than three years in prison, less than the more than four years requested by federal prosecutors.

But now, Chansley is represented by John Pierce, a known entity among Jan. 6 defendants: his conservative “National Constitutional Law Union” is providing legal support for at least 22 people accused in the Capitol riots.

Pierce was an attorney for the recently-acquitted Kyle Rittenhouse before he was fired in February.

On Nov. 22, just five days after Chansley’s sentencing, Pierce filed a notice of appearance in Lamberth’s court and announced that he intended to file an appeal.

“Mr. Chansley will be pursuing all remedies available to him under the Constitution and federal statutory law with respect to the outcome of the criminal prosecution of him by the United States Department of Justice,” Pierce and his purported co-counsel William Shipley wrote in a press release announcing his alleged representation, Law&Crime reported at the time. “This includes a possible direct appeal of his conviction and sentence to the United States Circuit Court of Appeals for the District of Columbia, as well as claims of ‘Ineffective Assistance of Counsel’ in the appropriate venue.”

This, apparently, was news to Watkins, who publicly denied that his client had kicked him off the case.

“Upon noting today’s entry of appearance of John M. Pierce, Esq. in Mr. Chansley’s J6 case, Watkins personally spoke with Mr. Chansley who confirmed he did not personally authorize Mr. Pierce to represent him and confirmed Watkins’ continuing representation of the man who has become universally known as ‘The Shaman,'” a press release from Watkins said at the time.

“Watkins issued a letter to Mr. Pierce confirming he had not received any contact from Mr. Pierce and requesting the prompt withdrawal of his entry of appearance,” the press release also said. “No response from Pierce has been forthcoming.”

Finally, on Nov. 24, Lamberth called a hearing in order to determine just who, exactly was representing Chansley.

“In light of the approaching procedural deadline [to appeal], the status conference is necessary to confirm defendant’s counsel of record,” the order said.

Monday’s hearing was relatively brief, with much of it sealed. But by the end, Lamberth made it official: he granted Watkins’ request to withdraw from the case, and confirmed that Pierce would be Chansley’s attorney going forward.

Watkins, for his part, appeared to harbor no ill will toward his now-former client.

“All sentenced federal defendants have the right to appeal their sentence,” Watkins told Law&Crime over email after Monday’s hearing. “Jake is a remarkably gentle and bright young man. I sincerely wish him all the best in his life. He has a bright future.”

Chansley pleaded guilty in September to one count of obstructing an official proceeding, and he waived his right to appeal except for on the basis of ineffective assistance of counsel.

Chansley’s decision to appeal belies the remarks he made at his sentencing hearing, where he apologized for his actions and called his actions “indefensible.”

“I was wrong for entering the Capitol,” Chansley told the judge. “I have no excuse, no excuse whatsoever.”

As Law&Crime previously reported, Chansley also blamed news media for “controversializing” him, spoke about grappling with mental illness, compared himself to Jesus Christ and Mahatma Gandhi, and ended his address by saying: “God bless you and may God bless the United States of America.”

Lamberth told Chansley that what he did was “terrible.”

“You made yourself the epitome of the riot,” Lamberth said. He also referred to Chansley as “the very image of the riot.”

But he also praised Chansley, saying that his remarks at the hearing sounded like something that might have been said by Martin Luther King.

That sentencing hearing was on Nov. 17. Pierce filed his notice of appearance on Jan. 22.

Under federal law, Chansley has 14 days after sentencing to appeal his case. After counting for weekends and holidays, that makes Dec. 8 the filing deadline.