Day Care Teacher Arrested in Child Abuse Case After 2-Year-Old Needed Root Canal: ‘One of His Top Front Teeth Was Broken and Missing’ 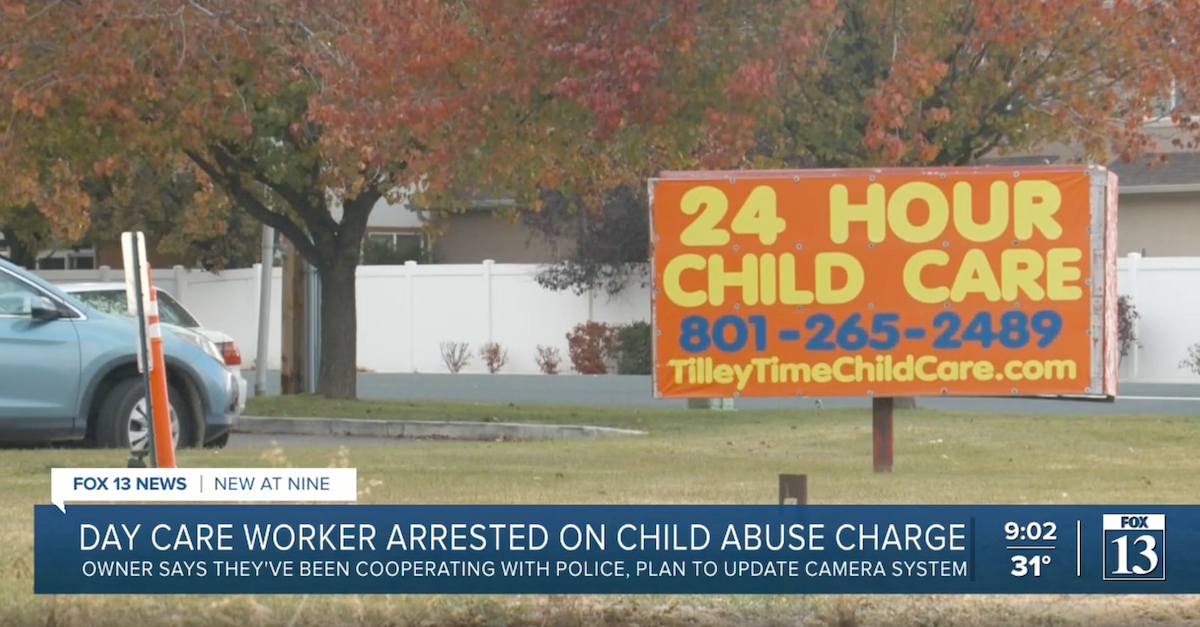 An employee at a Utah day care is under arrest after a child needed a root canal from what police describe as a case of aggravated child abuse.

Juana Petatan Noyola, 67, is charged with intentionally or knowingly bashing a 2-year-old boy known in court documents as “AG” into a table or a chair.

The narrative picks up the next day. On Nov. 3, the mother’s 7-year-old child, AT, asked the mother if she had seen AG’s lip, according to the affidavit.

The mother “then looked at AG and found he had a cut on his lip, dried blood in his nose, and one of his top front teeth was broken and missing,” the affidavit says. The mother allegedly told police that she “asked AG what happened to him, and AG told her one of the daycare teachers hit him on a table.”

The mother said AG did not exhibit the injuries before going to the day care facility in question. She went to the day care to try to review video of the incident, but she “was not allowed to,” the police wrote.

The mother next explained, according to the affidavit, that “she was not notified by the daycare of AG sustaining any injury” while at the day care despite the facility’s policy of notifying parents if an injury occurs.

The police then stepped in to obtain the video. A police officer said he requested Nov. 2’s recordings between 3:00 p.m. and 10:30 p.m. — the times the two children were at the facility — and “finally” received a copy on Nov. 16.

“Your affiant [the police officer investigating the case] was only given approximately nine minutes of surveillance footage,” the affidavit goes on. “Your affiant witnessed in the surveillance video a daycare employee later identified by the daycare as Juana Noyola, handling AG aggressively and roughly, hitting AG in the head twice, and forcefully throwing him down. When AG is thrown down it appears that the hits his face on a chair and the interaction is consistent with how AG said he was injured.”

The boy’s mother later told the police that “AG had to have a root canal” due to his injuries, the affidavit states.

When confronted by the police and read her Miranda rights, Petatan Noyola allegedly admitted to hitting the boy. She then “admitted to also knowing what she did was wrong.”

The defendant also told the police that she’d taken classes which taught her to not injure the children in her care.

She even allegedly admitted that she disciplined her grandchildren in such as way that caused them to bleed from their mouths.

The authorities asked a judge to hold Petatan Noyola without bail because she allegedly admitted she was a Mexican citizen.  The authorities wrote that they fear she may “flee the country” if she’s released from jail.

A manager at the day care told Salt Lake City FOX affiliate KSTU that his facility cooperated with the police.

“We had a teacher did not live up to our code of conduct in that incident,” said Johnny Anderson.

KSTU described Anderson as “the president of ABC Great Beginnings, which took over daycare operations in August.”

“So when we were made aware of it, we immediately notified the detective who was involved, asked him to take a look at what we had seen,” Anderson said of the incident in question.

Anderson also said that Petatan Noyola and his other employees are subjected to background checks and that nothing problematic appeared in her past.

Salt Lake County Jail records on VineLink, a national inmate data website, list Petatan Noyola as a “non-hispanic” inmate who was booked into custody on Nov. 17, 2022, at 3:56 p.m. The records state that she remains in custody, but the last update of her status was that same date — Nov. 17.  An inmate search tool maintained by the county sheriff’s department also lists Petatan Noyola as in custody as of the time of this report.

A relatively new Utah law bans authorities from releasing inmate mugshots in most circumstances until after any possible conviction.