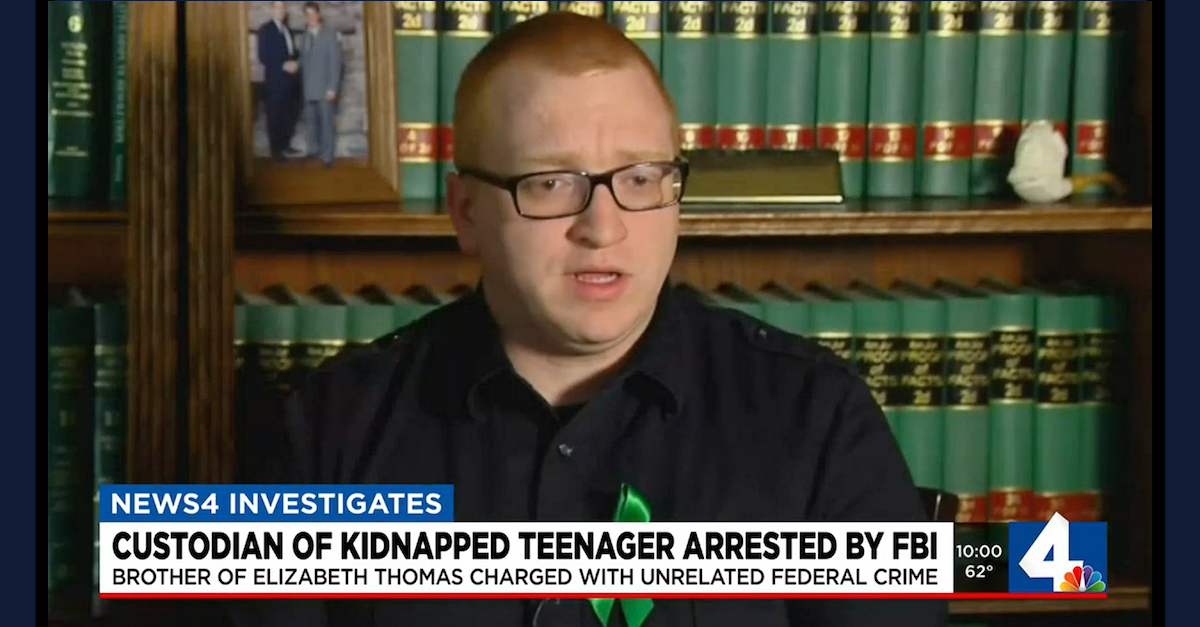 A county corrections officer who was appointed to care for a Tennessee teen who was kidnapped by her teacher and taken across state lines for sex has now himself been indicted for lying about the alleged sexual abuse of an inmate. That’s according to federal court documents and a report by Nashville NBC affiliate WSMV.

The jailer, James Stewart Thomas, 31, of Columbia, Tennessee, is accused of one count of falsifying records in connection with the alleged rape for the inmate, according to the U.S. Department of Justice.

Thomas is the brother and legal custodian of Elizabeth Thomas, the then-15-year-old who vanished with her then-50-year-old teacher Tad Cummins on March 13, 2017.  The student was rescued on April 20, 2017, after a nationwide AMBER Alert; she and Cummins were holed up in what the Tennessee Bureau of Investigation described as a “rural cabin” near Cecilville, California. Cummins was charged with sexual contact with a minor and aggravated kidnapping, the TBI said at the time Cummins was arrested. 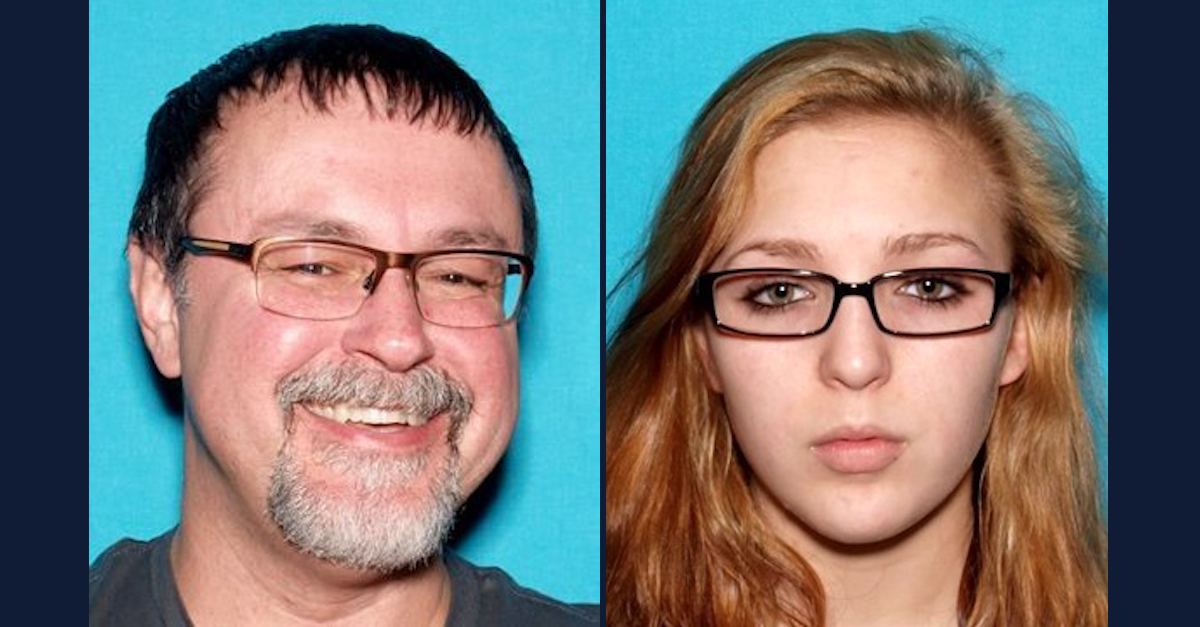 These images released by the TBI show Tad Cummins and Elizabeth Thomas both were missing.

Cummins pleaded guilty to federal charges of transporting a minor across state lines for the purpose of engaging in criminal sexual conduct and obstruction of justice in April 2018.

Federal prosecutors wrote in a sentencing memorandum that Cummins groomed the victim, performed sex acts on her “in his classroom closet,” and then made plans to run away with her. Cummins researched “the type of bed that would fit into the back of a Nissan Rogue (his wife’s vehicle),” looked up “child marriage laws” online, and took “out a $4,500 loan to cover travel expenses and filling his prescription for Cialis, a drug commonly used to treat erectile dysfunction and prolong sexual performance,” federal prosecutors wrote. Cummins then disabled his vehicle’s GPS, destroyed cell phones, and “went to other extreme measures to evade law enforcement, including altering his and the victim’s appearances, using false aliases, and representing to others that he was married to the victim,” the prosecutors told a judge.

A federal judge in Tennessee sentenced Cummins to 20 years in prison. 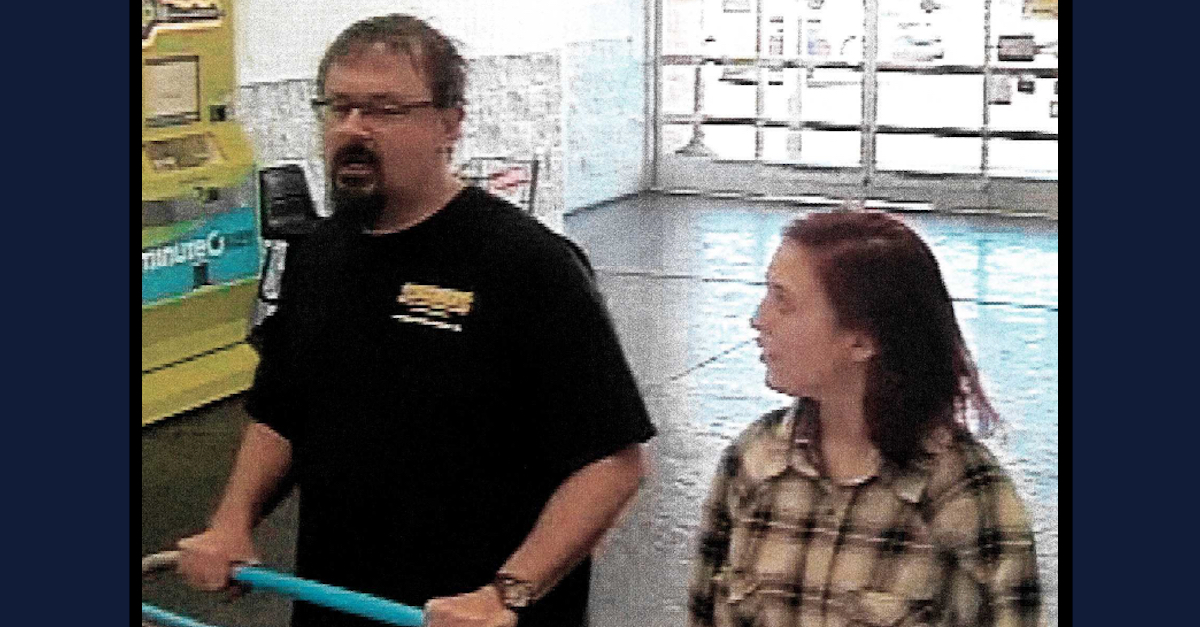 Tad Cummins and Elizabeth Thomas were captured by a security camera at an Oklahoma Walmart store while Thomas was missing and Cummins was on the run. (Image via the TBI.)

The victimized student wrote to the court that Cummins “should not be allowed to return to the general population” both for her safety “and for other children’s safety.”

“Even if he is made to stay on house arrest, just knowing he will be near me terrifies me,” Elizabeth Thomas wrote to the court. “I have worked very hard over the last three years to move past the very dark time of my life involving Tad Cummins. If I have to live in constant fear again, I feel like all of that would be for nothing. The court ordered that he go to prison, and that is where he belongs.” 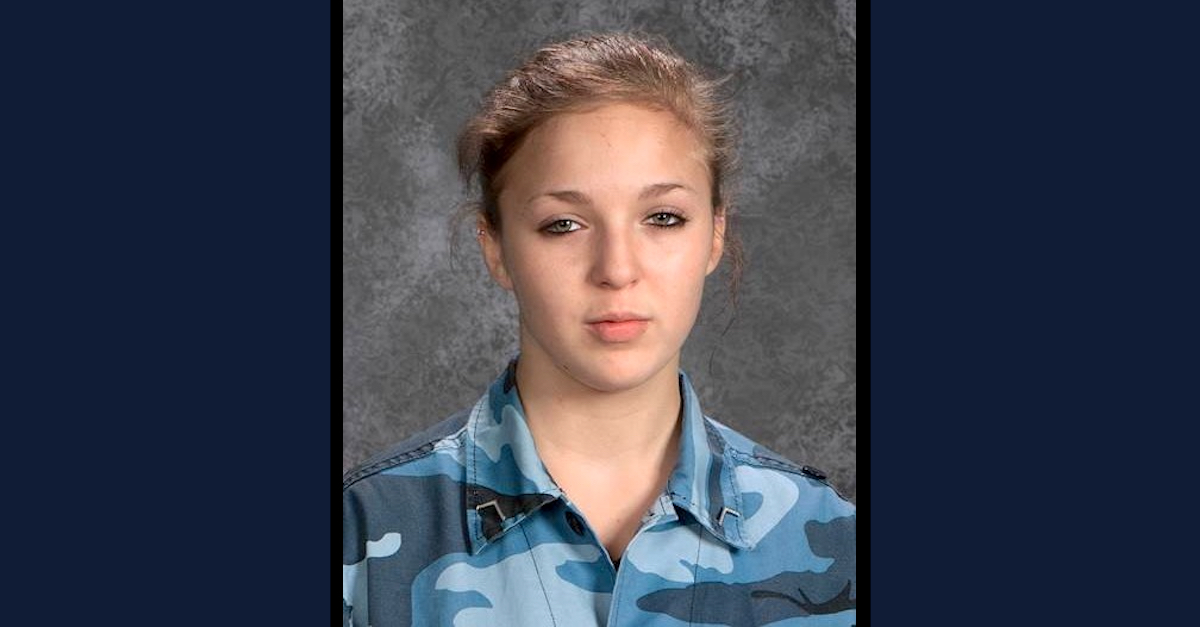 A school portrait of Elizabeth Thomas was released by the TBI while she was missing.

The victim’s brother, James Thomas, became Elizabeth Thomas’s legal custodian after her rescue, according to WSMV. Now, James Thomas is facing charges for allegedly covering up his own rape of an inmate at the jail where he worked.

There is no evidence on the record to suggest that James Thomas was involved with Cummins’ decision or attempt to commit crimes against Elizabeth Thomas. 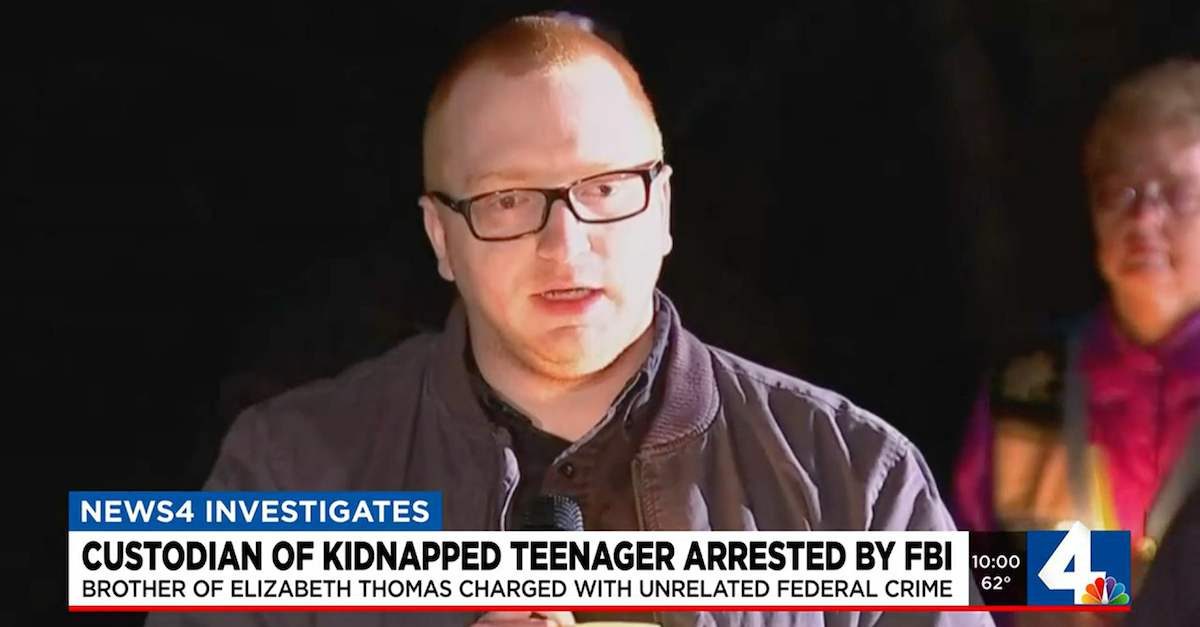 Federal prosecutors say James Thomas was a corrections officer at the Maury County Jail. A county website lists him as an FTO — likely an acronym for Field Training Officer — on the night shift at the facility.

Here’s how the DOJ summarized the allegations:

“If convicted, Thomas faces a sentence of up to 20 years in prison,” the DOJ said.

An indictment says Thomas “falsified” an incident report which responded to allegations that he “had nonconsensual sexual contact with C.C., a female inmate in his custody.”

A section of James Stewart Thomas’s federal indictment lays out the basis for the charge.

WSMV previously broadcast an interview with the inmate who accused Thomas of rape. That inmate, Carissa Christ, said she was recovering from surgery when she awoke from pain medication “to find Thomas raping her,” per WSMV’s report.

“Christ said she was raped other times inside her jail cell during her stay,” WSMV said while recounting the allegations.

“He is a sexual predator,” Christ told the TV station in 2018. “I’d wake up and he’d be standing there, in the middle of our cell, two o’clock in the morning.”

She said she didn’t report the alleged rapes when she was behind bars and only told a few people after she was released.

“When it’s an inmate’s word against an officer, the inmate is always wrong,” Christ also told WSMV. 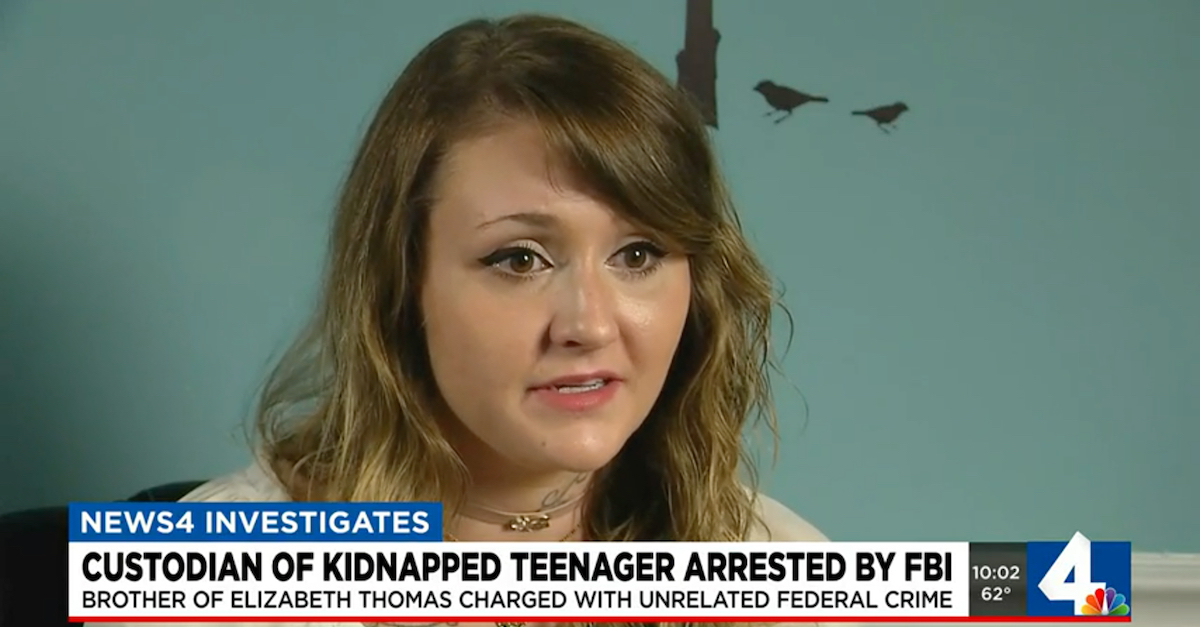 Carissa Christ, who says she was raped by a jail guard, agreed to an on-camera interview with WSMV.

A former corrections officer who asked the television station to conceal her identity said Thomas admitted to her that he could “go to the federal penitentiary” for something he’d done.

That former officer told the NBC affiliate that Thomas had been assigned to watch over Christ due to the latter’s surgery. The former officer said after Thomas’s apparent admission, she looked at jail security video and saw Thomas frequently visiting Christ’s cell.

“There was no doubt in my mind that there was a sexual relationship happening,” the incognito ex-correctional officer told WSMV.

An attorney connected to the Thomas family responded to the indictment when contacted by the NBC affiliate.

“James Thomas is a good and decent man who is only in the spotlight because of who he is,” defense Jason Whatley told WSMV.  “It is unfortunate that the news media treats differently those, who by no choice of their own, are forced into the public spotlight. My sincere believe and prayer is that the truth will ultimately prevail and that people will let James and his family live in peace.”

The statement made no mention of the scrutiny that public employees carry by the nature of their employment.

Whatley in 2018 told WSMV in an on-camera interview that Thomas denied any sexual contact while the victim was in jail. The anonymous jail guard told the television station that she submitted reports about her concerns, but the sheriff’s office said it could find no evidence that reports were submitted. But the DOJ alleges that reports were, indeed, submitted — and that they contained lies. A federal indictment even contains an incident number on those reports that allegedly originated with the defendant himself.

A federal court docket says Thomas pleaded not guilty on Monday, May 23. Magistrate Judge Alistair E. Newbern ordered him released from custody after processing under rather lenient conditions.  The defendant is not subject to GPS monitoring, is not subject to a curfew, is ordered to continue or actively seek employment, and is allowed to drink alcohol — so long as it’s not in excess. He must not possess firearms and must limit his travel.

Magistrate Newbern also agreed that Thomas could not afford counsel and agreed to appoint a federal public defender. He was also exempted from paying certain court costs.

Some of the federal case file is below: