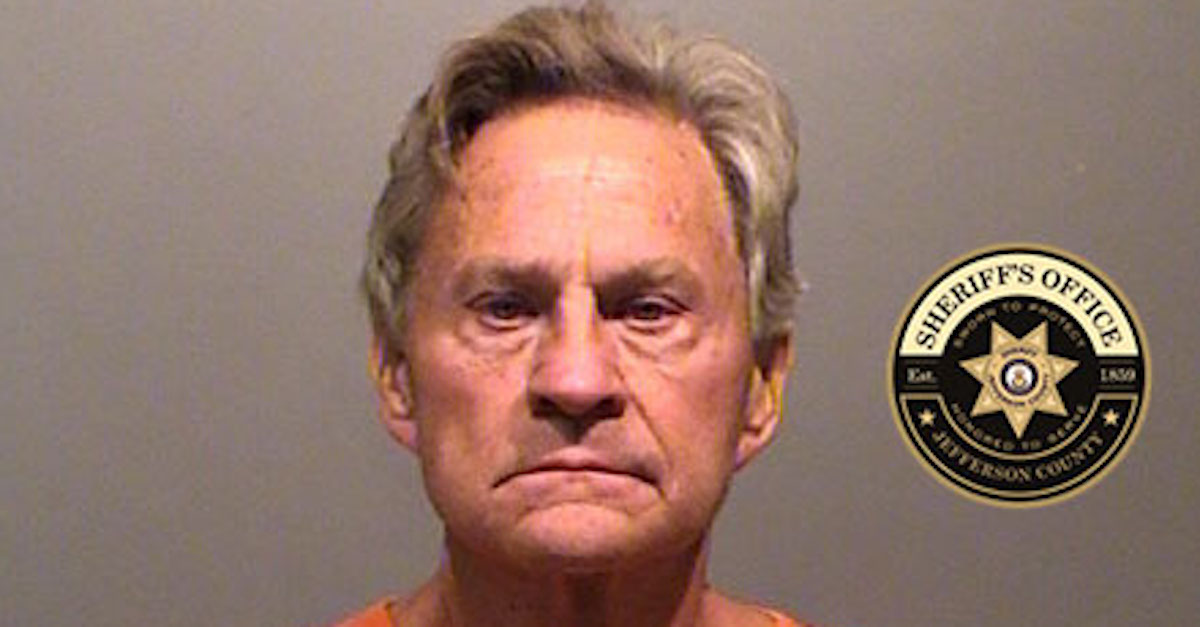 Authorities say a 73-year-old Colorado real estate agent was arrested late last week after he allegedly kidnapped his former girlfriend and her husband at gunpoint and forced the woman to wear a nylon leash.

Kerry Endsley was taken into custody on Friday and charged with a slew of felonies, including two counts each of second-degree kidnapping and menacing with a deadly weapon, records reviewed by Law&Crime show.

According to a press release from the Jefferson County Sheriff’s Office, deputies responded to a 911 call at approximately 8:10 a.m. on June 17 about a possible kidnapping on a hiking trail located near South Oak Way.

The caller told the dispatcher that he was hiking alone on the trail when he came across a man holding two other hikers at gunpoint. The caller further explained that he was actively witnessing the kidnapping, which was still in progress. He remained on the phone with the dispatcher and provided updated information until deputies arrived on the scene a few minutes later, according to officials.

“The suspect failed to comply with commands from the deputies and pulled a weapon, later determined to be a stun gun, from his waistband and point it at the deputies,” the sheriff’s office wrote in the release. “One of the deputies fired a shot from his firearm, missing the suspect. A second deputy deployed his Taser at the suspect – hitting him. The suspect was taken into custody and transported to an area hospital after complaining of injuries from the Taser.”

The couple escaped the alleged kidnapping unharmed and was transported to the sheriff’s office to be interviewed, authorities said.

According to the release, the couple said they were hiking on the trail when they saw an adult male who was kneeling down and appeared to be tying his shoe. When they walked by the kneeling man, he allegedly got up and trained a gun on them.

“The suspect ordered the female to the ground and put a nylon leash around her neck. The suspect then ordered both victims to come with him,” according to the sheriff’s office. “At one point, the male victim was able to take the handgun away from the suspect. The two victims then fled the immediate area and were contacted by law enforcement.”

The couple further said that they recognized Endsley soon after he allegedly pulled a gun on them. Endsley had allegedly “altered his physical appearance and disguised himself” prior to confronting the two victims. Investigators say they learned that Endsley had previously harassed the female victim, noting that she had a restraining order against him.

According to Los Angeles CBS affiliate KTLA, deputies said Endsley was wearing a baseball cap and “what was later determined to be a costume style fake beard.” He was reportedly in possession of a Taser and bear spray when taken into custody. Investigators also searched Endsley’s vehicle and reportedly recovered handcuffs, plastic flex cuffs, binoculars, and a mattress.

Endsley previously pleaded guilty to harassing the female victim last year and was still on probation at the time of his arrest, according to a report from Denver NBC affiliate KUSA. The charge reportedly stemmed from the woman filing charges against Endsley’s stepdaughter for breaking the victim’s phone. Endsley reportedly harassed the female victim about dropping the charges.

The suspect is currently being held at the Jefferson County Jail on $500,000 bond. He is scheduled to appear before a judge at 10 a.m. on Friday, court records show.