‘Evil, Dangerous’ Convicted Killer Sentenced for Murdering a Man Based on Brother’s Dream 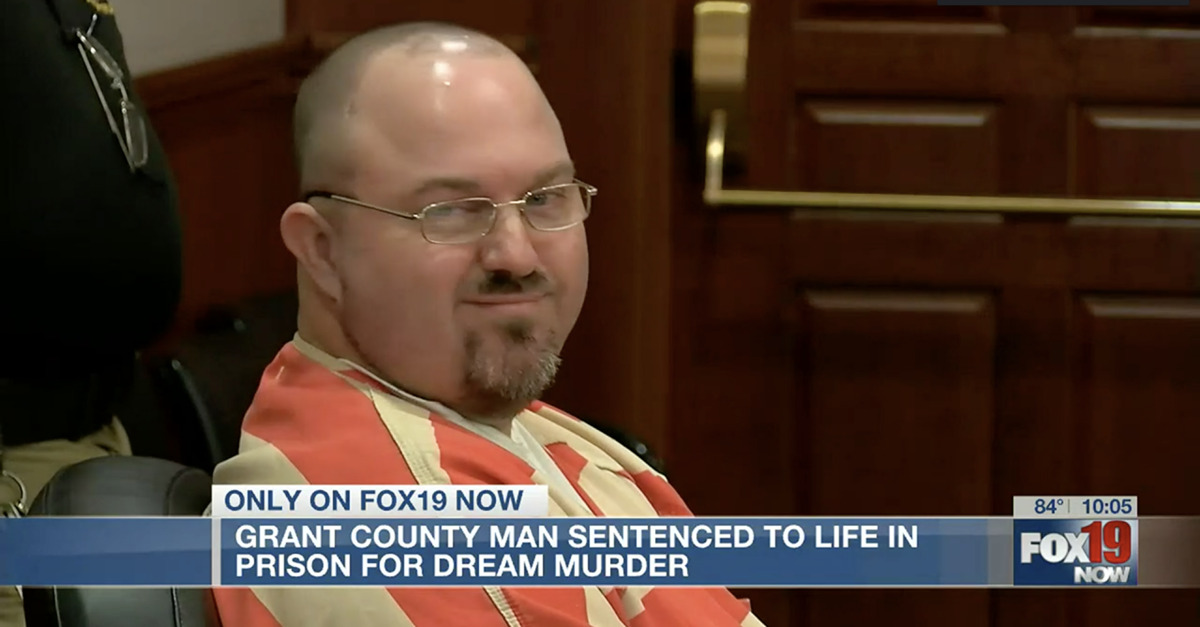 Monstrous violence has finally resulted in long-delayed formal justice in the Bluegrass State. All because of a dream.

A Kentucky man was sentenced to life in prison earlier this week for a murder he committed over a dream that wasn’t even his own.

In May of this year, jurors in Grant County, Ky. found Paul James, 43, guilty of murder over the August 2018 killing of 51-year-old Barry Kenner. Prosecutors argued, and jurors apparently agreed, the defendant killed the victim because of a dream James’ brother had.

According to local Fox affiliate WXIX, James shot Kenner on Aug. 18, 2018. The victim dialed 911 and reported his own wounds. After police arrived, Kenner was rushed to University of Cincinnati Medical Center but quickly succumbed to his injuries while James was arrested.

The TV station reported that the defendant was convicted on May 16, 2022. Commonwealth Attorney Leigh Ann Roberts reportedly said the victim’s family was “very pleased” with the outcome. James was originally slated to be sentenced on June 16, 2022.

“When you look at why, it’s sad, because it makes no sense and it was so uncalled for,” the prosecutor said after sentencing – which actually occurred on Tuesday, June 21, 2022. “I’m really happy for the Kenner family. I know they’ll never have their brother back, but they got their day.”

The bizarre and tragic turn of events started with the overdose and drowning death of a third James brother, Roberts explained.

That accidental death led to the defendant’s other brother dreaming that Kenner was somehow responsible for the overdose-drowning death. Acting on the brother’s dream, James killed an innocent man.

Roberts said there was zero evidence linking Kenner to the James brother’s death.

“I hope you rot in jail and burn in Hades,” Kenner’s brother told the defendant during the Tuesday sentencing hearing in footage broadcast by WXIX – the station did not identify him by name. “Not a day goes by that I do not ask why this happened to my brother.”

“You are an evil, dangerous man,” Dar Kenner Tolbert, the victim’s sister, said, addressing the defendant through tears while reading from a victim impact statement.

“He’s ruined two families,” she told the TV station after the proceedings.

When James was sentenced last month, jurors recommended a life sentence. On Tuesday, the court signed off on that recommendation. He was also convicted on one charge of witness tampering and sentenced to five year in prison, which will be served concurrently.

For nearly four years, the case was serially delayed due to the COVID-19 pandemic. Kenner’s family told WXIX the wait was “horrific,” according to journalist Courtney King.

The victim’s sister remembered her brother as a man fond of growing tomatoes and a born again Christian.

His obituary sketches out a few more details of a life cut short:

Barry worked for Toyota in Georgetown, was an avid outdoorsman, having a special love for hunting and fishing; he was a member of NRA and he attended the Grassy Run Baptist Church.

“I still can’t wrap my mind around why someone would do this,” Kenner Tolbert told WXIX. “It’s something I’ll have to live with the rest of my life, because I’ll never completely understand. It was based on a lie and a dream.”