California Man Shot and Killed His Four Young Kids and Mother-in-Law, Then Walked into Lobby of Sheriff’s Office: Sheriff 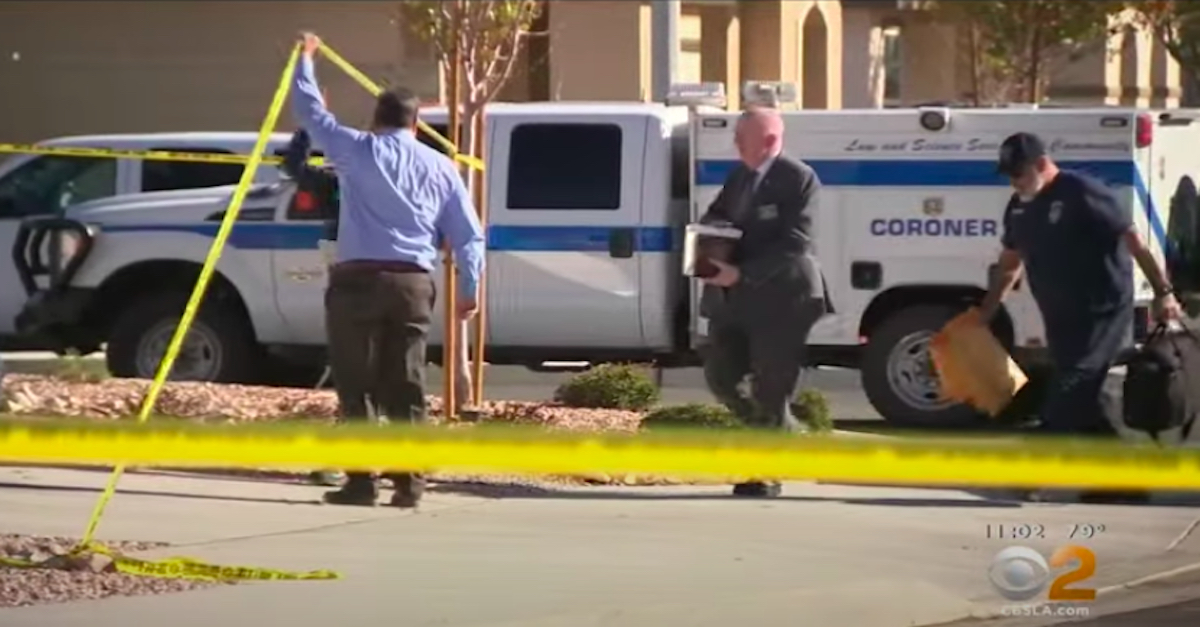 Authorities outside of the Lancaster home where police say Germarcus David killed his mother-in-law and four young kids.

Law enforcement authorities in California arrested a man accused of murdering his four young children, including an infant, and the children’s grandmother in a Sunday night killing spree, the Los Angeles County Sheriff’s Department said. The children’s father, Germarcus David, 29, was taken into custody hours after the slayings and held on suspicion of murder.

According to a press release from the LACSO, deputies with the Lancaster Sheriff’s station on Nov. 28 responded to a 911 emergency call at approximately 10:27 p.m. from the home located in the 3500 block of Garnet Lane.

Sheriff spokesperson Deputy Jaunita Navarro reportedly told The Associated Press that deputies were dispatched on a “rescue responding” call to the home, which she explained is a code that means paramedics have already been dispatched to the location.

Upon arriving on the scene, first responders reportedly found a Black female adult in her 50s dead from an apparent gunshot wound “to the upper torso.” Deputies also located a female juvenile victim and three male juvenile victims “all under the age of 12-years-old suffering from gunshot wounds to the upper torso,” the sheriff said. Per the release, all five of the gunshot victims were pronounced dead on the scene by responding paramedics. The adult female was later identified as the children’s maternal grandmother.

While authorities did not specify who made the initial 911 call, Los Angeles FOX affiliate KTTV reported that the children’s mother returned to her home and discovered the kids and her own mother deceased before calling the police.

Authorities said the names and exact ages of the victims were not being publicly released until next-of-kin can be located and notified of their deaths, though several news outlets reported that one of the juvenile victims was less than a year old.

Deputy Tony Moore of the Sheriff’s Information Office said the children’s father voluntarily turned himself in to investigators.

“A male Black adult, believed to be the father of the juvenile victims, was detained when he arrived at the Lancaster Sheriff’s Station lobby,” the office said.

He was placed under arrest at approximately 11:39 p.m. after reportedly spending multiple hours being interviewed by detectives, per KTTV.

“Homicide investigators have arrested Suspect Germarcus David, male Black 29 years-old, for the five murders. He is the father of the juvenile victims and son-in-law of the deceased female Black in her 50’s. She is also the grandmother of the children.”

David is currently being held at the Los Angeles Sheriff’s Office Inmate Reception Center (IRC). His bond was set at $2 million. He is currently scheduled to appear in Antelope Valley Court on Tuesday, Nov. 30.

The LACSO Homicide Unit and Lt. Brandon Dean are leading the investigation into the murders. Authorities did not release any information regarding a possible motive for the killings.

“This is not something that you would think would happen right in your neighborhood. They’re a beautiful family,” a woman who lives nearby told Los Angeles ABC affiliate KABC-TV. “This is sad. It’s insane.”