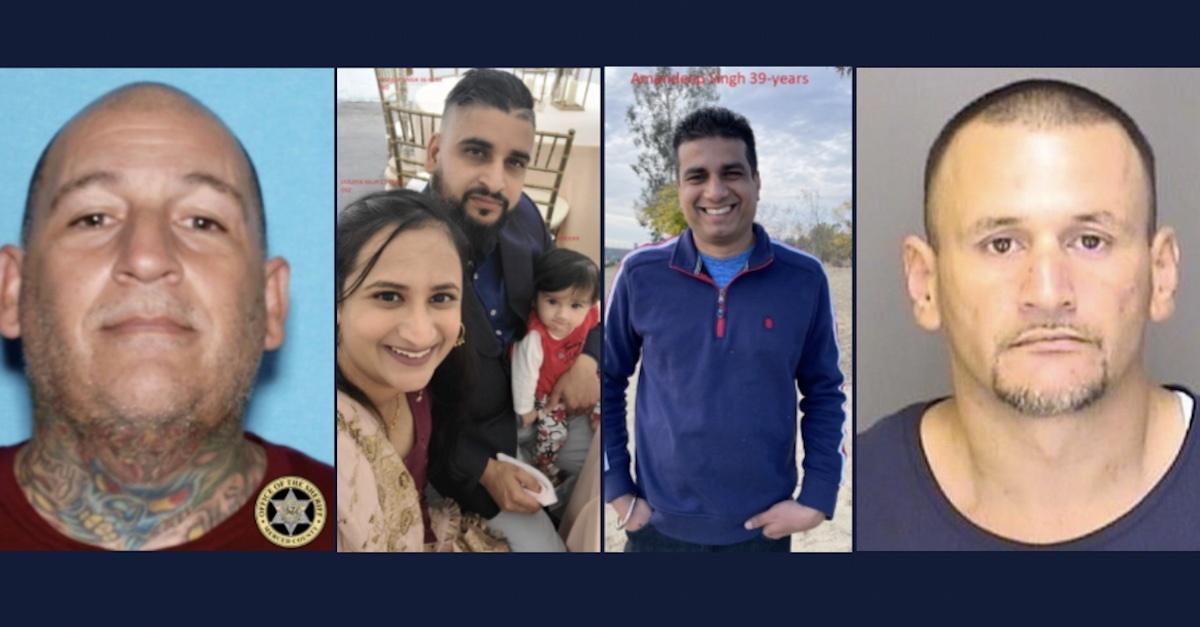 The brother of a man accused of kidnapping and murdering a family of four in California was arrested Thursday for allegedly helping him.

Alberto Salgado is in the Merced County Jail on charges of destroying evidence, criminal conspiracy and accessory, the Sheriff’s Office announced Friday. His brother Jesus Manuel Salgado was arrested earlier on four counts of murder and four counts of kidnapping for the gunshot slayings of 8-month-old Aroohi Dheri, her mother, Jasleen Kaur, 27; father, Jasdeep Singh, 36; and uncle, Amandeep Singh, 39.

Investigators say Jesus Salgado, 48, kidnapped the family from their trucking company office on South Highway 59 near Merced in Central California on Monday. They identified Salgado as a person of interest Tuesday, then arrested him after he attempted suicide. Authorities initially said he was “currently receiving medical attention and in critical condition,” but that changed with the announcement he’d been booked into jail.

Few details have been publicized about Alberto Salgado’s involvement, but investigators previously said one of the victim’s ATM cards was used at a bank in the city of Atwater, about 10 miles northwest of Merced, and that the man who used it turned out not to be Jesus Salgado.

Sheriff’s officials released surveillance video showing the victims being led from the business by a masked gunman. The Singh brothers had their hands zip-tied behind their backs.

Deputies found the family dead in an almond orchard on Wednesday after responding to a report of a dead person in the Dos Palos area of Merced County about 5:30 p.m. A 2020 Dodge Ram truck belonging to one of the victims was found burning in the town of Winton, near Atwater and Merced, on Tuesday. Investigators believe it’s connected to the crimes but haven’t yet publicly said why.

The California Department of Justice is helping with the investigation.

Merced County Sheriff Vern Warnke said Wednesday of the killer: “There’s a special place in hell for this guy, and I mean it.”

Asked if he thought Salgado acted alone, Warnke said, “We don’t have any evidence to say that he didn’t.”

“However, 43 years doing this, everything points to there was probably someone else,” he added.

The sheriff said his office was being “inundated” with tips, and investigators were following every one, “to include our psychics that are calling in, literally.”

“We’re not leaving any stone unturned, any blade of grass,” Warnke said. He said he believes the motive is likely financial, because it almost always is.

The sheriff’s office also said last night that the family of the victims “are not asking for donations or seeking any assistance at this time.”

“There is no GoFundMe account or any other donation links set up. If that changes, the Merced County Sheriff’s Office will be the one to announce that,” the office said. “They greatly appreciate everyone’s willingness to help the family, but at this time they ask for privacy so they can grieve and process what has taken place.”

Warnke said Jesus Salgado has a 2005 conviction for robbery and was paroled in 2015.