‘He Needs to Do It Now’: Stewart Rhodes Saw Jan. 6 as Crucial Deadline for Trump to Take Action, D.C. Jury Hears 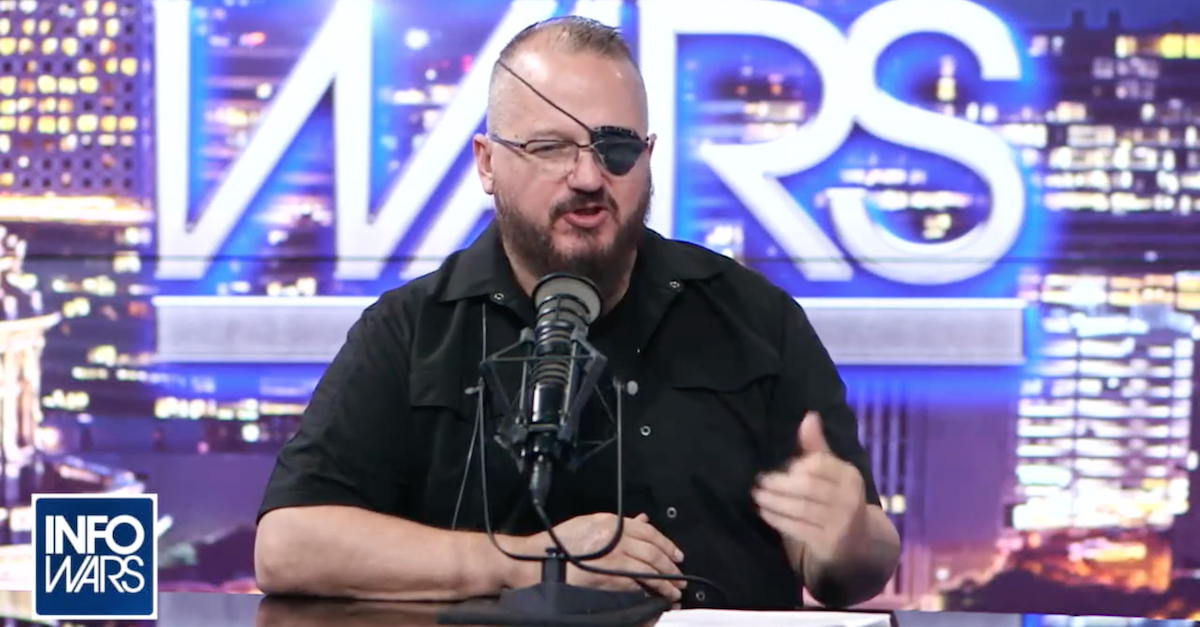 Stewart Rhodes appeared on Infowars on March 31, 2021. (Image via screengrab.)

Law enforcement in Washington, D.C. had Stewart Rhodes on their radar in the weeks leading up to the attack on the U.S. Capitol building, and that the leader of the Oath Keepers viewed Jan. 6 as a crucial deadline by which outgoing President Donald Trump needed to take action in order to remain in the White House.

Testimony in the seditious conspiracy trial against Rhodes continued into its fourth day Friday. Rhodes, along with Kelly Meggs, Thomas Caldwell, Jessica Watkins, and Kenneth Harrelson, are accused of plotting to disrupt the transition of presidential power from Trump to President Joe Biden. According to prosecutors, the ardently pro-Trump Rhodes started forming his plan in the early days of November 2020, shortly after Election Day — a plan that allegedly included having a heavily-armed “Quick Reaction Force” ready to ferry weapons stashed at a hotel across the Potomac River to the Capitol.

“Let’s Get It On Now While He Is Still the Commander in Chief.”

The first to testify Friday was U.S. Capitol Police Special Agent Ryan McCamley, a task for officer who serves as a liaison between Capitol Police and the FBI.

McCamley testified that that Rhodes first popped up on his radar in December 2020, after he read a magazine article that focused on the Oath Keepers group and its efforts to recruit former law enforcement. He told Assistant U.S. Attorney Jeffrey Nestler that it was his first time reading about the group and its leader.

Rhodes and others were in the capital for a pro-Trump demonstration that included a so-called “Stop the Steal” rally and a “Jericho March.” McCamley, who was working a countersurveillance assignment at the time, said that as he and his partner were observing the grounds near the Supreme Court and the Capitol building, he noticed a cameraman talking to a group of people.

“It piqued our interest,” McCamley said.

“Had you seen anyone you recently read about?” Nestler asked.

“I noticed a cowboy hat and an eyepatch,” McCamley said, as well as another person wearing an Oath Keepers patch, and “it started to click.”

“It appeared to be Stewart Rhodes,” McCamley added. He snapped a picture of the group and sent it around to the other intelligence agents and law enforcement on assignment that day — “for operational safety, for planning,” he said. “Just for awareness.”

Nestler then ran a couple of video clips of Rhodes speaking at that event, in which he calls for Trump to invoke the Insurrection Act to “drop the hammer” on “traitors.”

Rhodes tells the crowd that under the Insurrection Act, they can be “called up” as a militia until they are 65 years old.

Toward the end of his questioning, Nestler showed McCamley a picture of Rhodes’ Capitol access badge from when the defendant was a legislative correspondent for former Rep. Ron Paul (R-Tx.). McCamley confirmed that it was, essentially, an all-access badge that granted unescorted access to the Capitol building. It was valid from June 1998 to February 1999.

Defense lawyers kept their cross-examination brief: Rhodes attorney Phillip Lee Bright got McCamley to confirm that Rhodes was not doing anything illegal when the agent took that picture and sent it to his colleagues on Dec. 12, 2020. He also appeared to suggest that McCamley may have been presumptuous in concluding that whole group of people were Oath Keepers members.

After recalling McCamley’s testimony that he saw a “small group” of Oath Keepers in the area near the Supreme Court, Bright asked McCamley if he was able to identify any members other than Rhodes and the person wearing an Oath Keepers patch. McCamley said he did not.

Bright, apparently wanting to let that question and answer hang in the air for a moment, paused briefly before saying he had no further questions.

After confirming with McCamley that the piece he read was from an online magazine called Defense One, Fischer asked McCamley if he knew that magazine was “sponsored by The Atlantic.”

Apparently opting for a “liberal media” angle, Fischer asked McCamley if he was aware of the “particular side of the aisle” The Atlantic sits. McCamley did not.

Nonetheless, McCamley confirmed that the reason he was keenly aware of who Rhodes was that day is because of the article.

The government’s second witness for the day was another law enforcement official, FBI Special Agent Byron Cody. His role on Friday was largely to confirm texts and other messages showing that Rhodes had become fixated on Trump invoking the Insurrection Act before Jan. 6.

“Here is the real way forward,” Rhodes wrote in December to an Oath Keepers leaders group chat on Signal. He then set forth the steps he believed were necessary to get states to “decertify” their election results before Jan. 6.

Rhodes dismissed as “nonsense” the idea that Trump invoking the Insurrection Act was only a last resort.

“He needs to do it now,” Rhodes wrote.

He sent a similar message to the “Friends of Roger Stone” group chat that same day.

“I feel like I’m taking crazy pills! LOL,” he wrote. “Nonsense. He must do it NOW before Jan. 6. And he needs to give the state legislatures the time to decertify before Jan. 6.”

On Dec. 19, Rhodes wrote to the Oath Keepers leadership chat.

“I’ll say it again,” he wrote, adding that it is a “tragic mistake” to wait until Jan. 6, when Rhodes believed that Congress and the Republican Party will “stab him in the back.”

“Did Mr. Rhodes sound optimistic here that something would happen on Jan. 6 to stop the results?” Rakoczy asked Cody.

“He did not,” Cody replied.

On cross-examination, Fischer noted that at the bottom of Rhodes’ open letter to Trump — which had been posted to the Oath Keepers website — there was a request for donations in support of the group’s mission. Fischer asked Cody whether that means what Rhodes wrote is actually a fundraising letter.

Cody said he didn’t agree that that was the purpose of the letter.

After Cody’s testimony, Mehta adjourned the trial for the day, thanking the jurors for their service and reminding them that trial would resume Tuesday, as court is closed Monday in observance of Columbus Day.