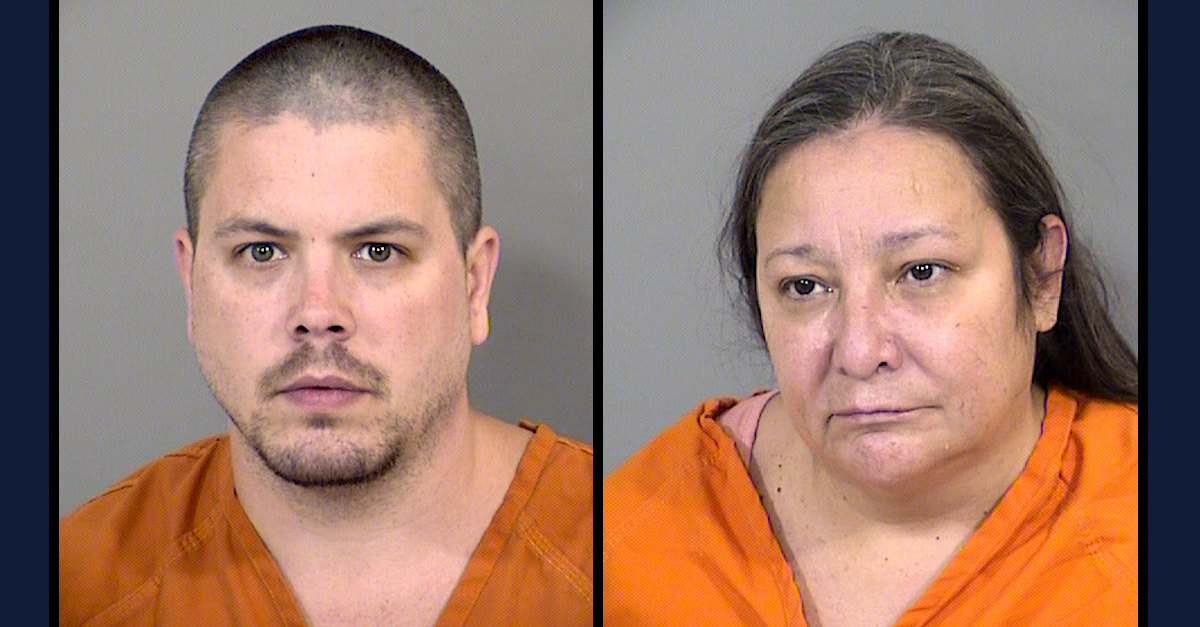 An Arizona grandmother and her husband are each facing premeditated first-degree murder charges in connection with the death of an 11-year-old grandson in the couple’s hotel room over the weekend.  Prosecutors on Tuesday said that 51-year-old Stephanie M. Davis had been subjecting her several grandchildren to “horrific” torture for years while her husband, 33-year-old Thomas J. Desharnais, did nothing to prevent the abuse, Phoenix CBS affiliate KTVK-TV reported.

“The nature and circumstances of the offense are frankly horrific, involving allegations of torture of children over a prolonged period of time, multiple victims — these are extremely serious crimes,” Maricopa County Prosecuting Attorney John Schneider said Tuesday during Davis’s initial appearance in court.

As previously reported by Law&Crime, officers with the Scottsdale Police Department on Sunday responded to a call about an unresponsive boy just before 5:00 p.m. at the Extended Stay America hotel on North Marshall Way. Upon arriving at the scene, first responders reportedly found Davis giving the boy CPR inside the hotel room. Paramedics took over and reportedly suctioned “a half liter of water” from the child’s body, according to court documents obtained by KTVK. The victim’s 9-year-old half-brother was in the room, and authorities reportedly observed that he had “an injury to his face and bruising around his eyes.”

The mortally wounded child, later identified as Chaskah Davis Smith, was transported to a local hospital by Emergency Medical Services personnel.  There, doctors attempted to resuscitate him, but he ultimately succumbed to his injuries and was pronounced dead shortly after arrival. The medical staff reportedly told investigators that the boy sustained “significant injuries” that were the likely cause of his death.

The brother was also examined by doctors. Both children were reportedly said to have sustained injuries that were “severe” and “in various stages of healing and scarring.” The authorities have alleged that such injuries are a tell-tale sign of prolonged abuse.

Davis and Desharnais, who have lived in the hotel for several years, were questioned by investigators and reportedly provided starkly different accounts of what happened to Chaskah.

Per KTVK, Desharnais told the police that Davis regularly abused the boys physically and mentally and that the abuse became more severe in recent months. He reportedly said that the day before Chaskah’s death, Davis hit him in the head with a metal ratchet four or five times. Desharnais also said his wife would regularly starve her grandkids for days, hit them with a wooden broom handle, and made Chaskah sleep in the bathtub several times per week “so that he would not get blood all over the room from his wounds,” the Arizona Republic reported.

Even more disturbing, Desharnais reportedly told investigators that Davis would use needle-nose pliers to torture the boys by pinching their skin and bending their fingers.

Police reportedly found needle nose pliers, a wooden broom handle, and a bloody wrench inside of the couple’s hotel room.

Davis reportedly said that Chaskah “had been hurting himself all day” prior to his death. She claimed that the boy hit himself in the head with the wrench and “cut his genitals with a paring knife,” per KTVK. She also reportedly claimed that she left Chaskah in the tub for between one and 15 minutes. When she returned, she apparently claimed the boy was not breathing, so she called 911 and began CPR.

The Maricopa County Medical Examiner’s Office is scheduled to perform an autopsy to determine the official cause of death.

Davis is currently being held on a $3.5 million cash bond; Desharnais is being held on a cash bond of $1.5 million.  Both are charged with first-degree premeditated murder and intentionally abusing a child or vulnerable adult, online jail records indicate.

A judge scheduled a status conference for Davis and Desharnais on Feb. 7.