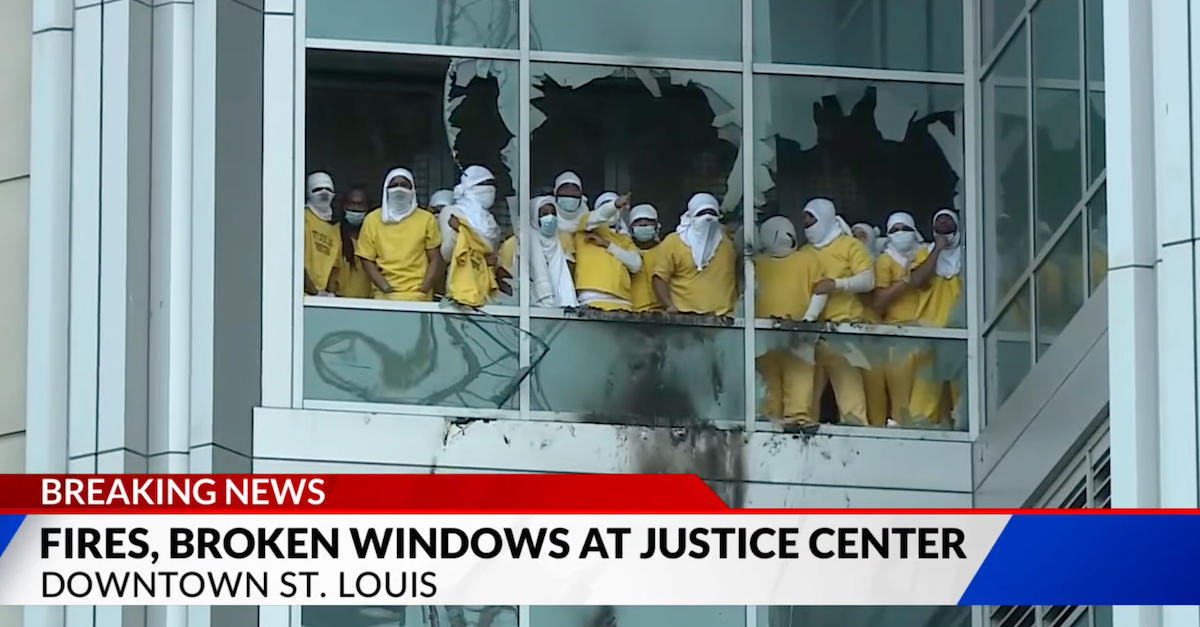 An uprising at the City Justice Center in downtown St. Louis occurred Saturday morning.  The events started at about 2:30 a.m. and ended with all inmates being rendered under the control of their jailers by about 10:00 a.m.  That’s according to Jimmie Edwards, the St. Louis Director of Public Safety, who spoke about the situation at a news conference later Saturday.

The whole thing started when a “defiant inmate . . . who was very, very upset . . . got into a scuffle with a correctional officer,” Edwards said. The guard “was then jumped by others,” he added.

“That correctional officer was taken to the hospital, and we believe he is doing well at this time,” Edwards said.

He said faulty facilities were partially to blame.

“Unfortunate, inside of our system, in certain units, our detainees have the ability to jimmy their locks; and the locks don’t necessary lock.  Even though our automated panel system would indicate that the cells were locked, they are in fact not locked,” he explained.  That’s why other detainees were able to join the ruckus and escalate the situation.

One unit of the jail was “breached,” Edwards said, when the detainees who were able to get out of their cells took control of the panel which controlled that part of the facility.

Once one unit was affected, another followed.  Two units on only one floor of the jail were affected.

Edwards said the inmates were “angry, defiant, very violent people.”  All were under arrest on “serious” high-level felonies.

The guard who was initially injured “suffered bruises and contusions,” the St. Louis Post-Dispatch reported. No other injuries were reported.

About 115 inmates were involved.  Approximately 65 were transported to a “medium security” institution which is more secure than City Justice Center, Edwards said.

The inmates complied once other guards took control of their floors.  At no time were inmates able to move from one floor of the facility to another, Edwards added.

Jacob Long, a spokesperson for Mayor Lyda Krewson, said inmates “set fires, clogged toilets, and flooded different areas of the floor,” both the Post-Dispatch and the Associated Press reported.  Long called the damage “extensive” per the AP.

Long called the situation a “very dangerous disturbance” according to NBC affiliate KSDK-TV.

“Very dangerous and violent situation this morning at the City Justice Center,” the mayor tweeted directly on Saturday afternoon. “I’m grateful to hear that our corrections officer who was attacked and sent to the hospital will be okay. All those involved remain in custody with some being transferred.”

Some inmates broke windows and set fire to what appeared to be bedsheets in video taken from nearby sidewalks which was broadcast on St. Louis-area television stations.  Inmates also threw chairs out of the broken windows, the Post-Dispatch reported.  The paper added that Saturday’s incident was the “third disturbance” at the facility “in recent weeks.”

“In those cases inmates had expressed concern about unsafe conditions amid the coronavirus pandemic,” the newspaper said, though it added that officials have said no inmates are known to have COVID-19.

“Earlier this morning, a protest orchestrated by inmates happened inside the St. Louis City Justice Center. This is the third protest within 2 months focusing on the inhumane treatment of inmates during the Covid pandemic,” Aldridge said in a written statement. “These protests are significant because they show the connection between these three protests — highlighting the widespread issues that exist in the Workhouse [another local jail] and the Justice Center” (where the uprising occurred).

Aldridge then rubbished a claim by Edwards that no “demands” were made by the inmates.

“They only way you could believe that the inmates have no demands is by continuing to ignore them,” Aldridge continued. “Photos of the inmates taken today show them holding a sign that says ‘FREE 57.’ This is in reference to the more than 50 people put in solitary confinement after the December 29th protest for bringing to light the inhumane treatment during Covid.” 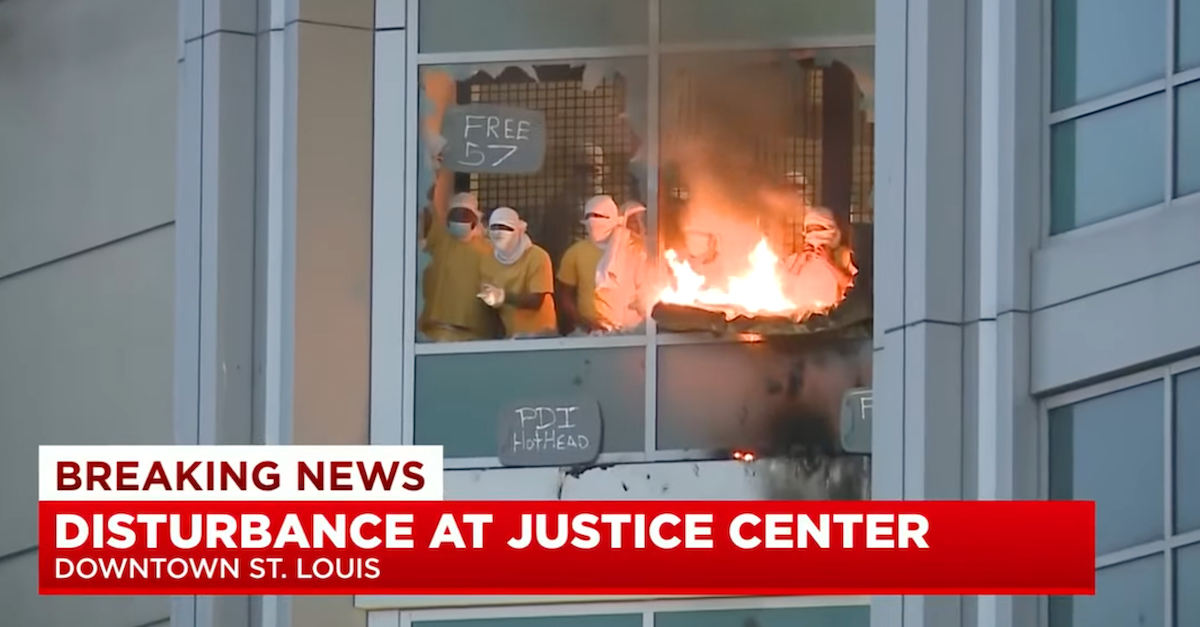 Inmates hold a “Free 57” sign while burning what appears to be a bedsheet at the St. Louis City Justice Center. (Image via screen capture from KSDK-TV.)

Long, the mayor’s spokesperson, had a more nuanced yet analogous view.

“I imagine they are under the same amount of stress due to COVID restrictions like the rest of us are,” Long told the Associated Press. “Courts haven’t been hearing cases in the 22nd Judicial Circuit. Their family visits have been restricted. But also they are acting out and that is the current situation.”