An LGBTQ Woman and Her Pitbull Were Stabbed to Death in a ‘Gruesome’ Murder in Atlanta. Now the FBI Is Involved. 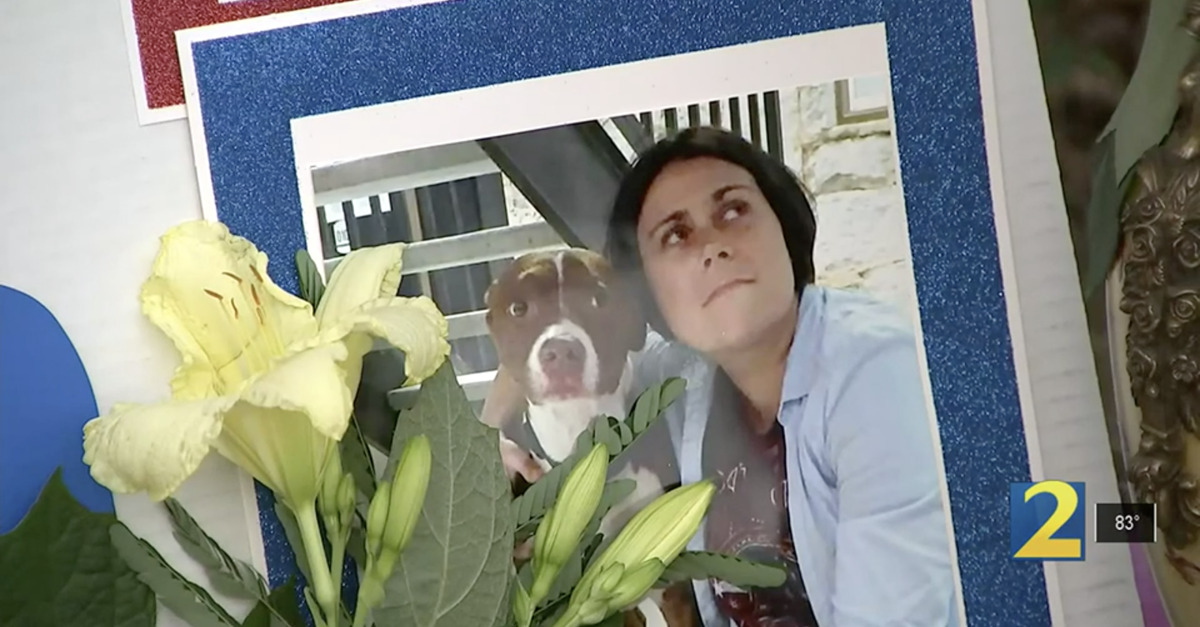 Katie Janness and her fiancée’s 3-year-old pit bull Bowie went out for a walk last Tuesday evening. They never returned.

Stabbed to death in Atlanta’s popular Piedmont Park, authorities there described the discovery made in the early Wednesday morning hours by the victim’s wife-to-be as a “gruesome scene.”

The victims suffered multiple stab wounds, and police said the discovery was “hard to stomach.” Now the FBI is involved.

According to local ABC affiliate WSB-TV, it is presently “unclear how the FBI is assisting in the case,” though there is some indication that the nation’s largest law enforcement agency may be offering resources to help local authorities identify DNA evidence.

Bowie reportedly had additional DNA in his hair, which suggests the dog may have tried to protect Janness as she was being attacked.

The two were last seen alive on surveillance footage while crossing a pathway that had been painted with rainbow colors–in honor of LGBTQ pride and the Pulse nightclub shooting victims-at the intersection of 10th St. and Piedmont Ave. in Atlanta, Ga. on July 28.

“Today I lost the love of my life and my baby boy,” Emma Clark wrote on a GoFundMe page. “It was tragic. She was the most intelligent, kind, humble, and beautiful person I have ever known. I wanted to spend every second with her. He was the sweetest most loyal companion. My heart is so very broken, my world will never be the same. Thank you to everyone who has reached out. It is truly appreciated.”

According to the Atlanta Journal-Constitution, Clark tracked Janness’s phone location after she didn’t return following dinner that night, ultimately finding her loved one dead.

According to WSB-TV reporter Michael Seiden, “a marking” was found on Janness’s body.

Authorities have so far been mum about the details of the slaying, but they did respond to “rumors” about the incident while insisting their investigation is ongoing.

The Atlanta Police Department provided a lengthy statement to their Facebook page addressing one such speculative narrative:

Like most of you, members of the Atlanta Police Department are deeply concerned with the recent murder of Katherine Janness. Those involved in the investigation are working tirelessly to find the person(s) responsible. For those of us not working the case, we are closely following the investigation, and waiting on updates. There have been many rumors and much speculation surrounding this case, both among members of the public as well as internally. Much of the information is inaccurate and some is completely false.

For any one of us to spread unverified information, would be irresponsible, but apparently it has occurred. This evening, a local reporter tweeted false information he received from “reliable sources” allegedly within the law enforcement community. This irresponsible “reporting” is discouraging, especially when we and the community rely so heavily on media for accurate information.

We made it clear we would not be able to confirm or deny all rumors they hear, but this particular reporter considered the information fair game, since it wasn’t directly denied.

We simply will not be forced into a position where we must refute all rumors to keep them from being published. The reporter in question wanted a story and wanted to be first, so he aired it anyway.

But this is not just a story to us. We are investigating a callous murder and we must be careful about what information we release, to protect the integrity of this investigation. Please rely on the information released through official channels and do not promote rumors and speculation on active investigations.

“We ask that you let us do our job and help us ensure this investigation is not compromised in any way,” the police department’s statement goes on. “Our goal is to bring anyone involved in this shocking murder to justice. Lastly, we do want to thank the members of the media who chose not to publish these unverified rumors.”

The rumor in question appears to be that a “homophobic slur” was marked on the victim’s body. WSB-TV does not currently qualify the alleged “marking” reported by Seidel but that basic description does still appear in the outlet’s reporting.

The brutal killing has shocked, saddened and angered the community.

“I mean, I’m a woman and I have a dog,” neighbor Jennifer Hnat told WSB-TV. “It could have been me.”

According to Atlanta Police Department Sergeant John Chafee, officers will be “conducting a tactical neighborhood canvass in and around Piedmont Park in an effort to locate anyone who may have information that would help further the investigation.”

The Georgia Voice reports that Janness was a bartender at the LGBTQ-owned Campagnolo Italian restaurant.

She was remembered last week at a vigil that was well over 100-strong, according to local Fox affiliate WAGA.

“We need to have our mayor and people come in and tell us what the hell happened because it is not right,” Chip Powell said, addressing the growing crowd. “She was an amazing human being that lost her life in the park in a way she should not have.”

“They were left to die alone,” Clark’s father, Joe Clark, said during the painful and tear-filled public remembrance. “The way Katie died, no one should ever have to. What they did to her is ridiculous. There is a monster on the loose in the city of Atlanta.”

“Somebody says, ‘She’s a bartender.’ She said ‘Well, I just didn’t want to go to school!,’ but she was the most intelligent,” Clark added–providing a glimpse into the victim’s inner life after death. “She’s a magnificent singer. She wrote her own songs. She taught herself how to play guitar.”