A Nevada man accused of murdering a toddler by beating the child to death was caught on video reaching for a police officer’s gun during an interrogation last month, mutitple local news outlets reported on Tuesday.

The 80-second video from May 11 shows Terrell Rhodes, 27, a suspect in the murder of 2-year-old Amari Nicholson, in an interrogation room with two Las Vegas Metropolitan Police Department officers.

During the first few seconds of the video, Rhodes appears to be crying—pulling his shirt over his face and saying, “let me go” and “I can’t go back.” He then slowly stood up from the chair, hunching his body over the table and placing both hands down before using his uncuffed left hand to quickly reach across the table and grab the handgun off the female officer’s waist holster.

Both officers quickly pounced on Rhodes with one of them repeatedly yelling “gun!” and a struggle ensued. The female officer delivered several quick jabs that appeared to connect with Rhodes’s face and a third officer ran into the room a few seconds later to subdue Rhodes. The officers recovered the firearm approximately one minute after it was taken, and no one was injured during the incident.

According to a report from local ABC-affiliate KTNV, Rhodes said “I’m going to kill a motherfucker” during his scuffle with the officers. The report further stated that just moments before Rhodes grabbed the officer’s gun, he confessed to murdering Nicholson—the child of his girlfriend—allegedly saying he punched the little boy multiple times because he urinated on himself. Rhodes allegedly told police the child then turned blue and purple and completely stopped breathing. He reportedly drew officers a map showing them where to find the child’s body, which was recovered the next day.

Nicholson’s mother had reported the child missing on May 5, telling police that Rhodes told her the boy had been taken by a member of his biological father’s family, per a report from local CBS-affiliate KLAS. At the time, Rhodes said it was “really sickening” that people were “making assumptions thinking that I had something to do with it.” The child’s mother was out of town when the boy went missing.

As Law&Crime reported at length on the case in May, Rhodes tried to point the finger at the child’s biological father and another relative during a local news interview prior to his arrest. 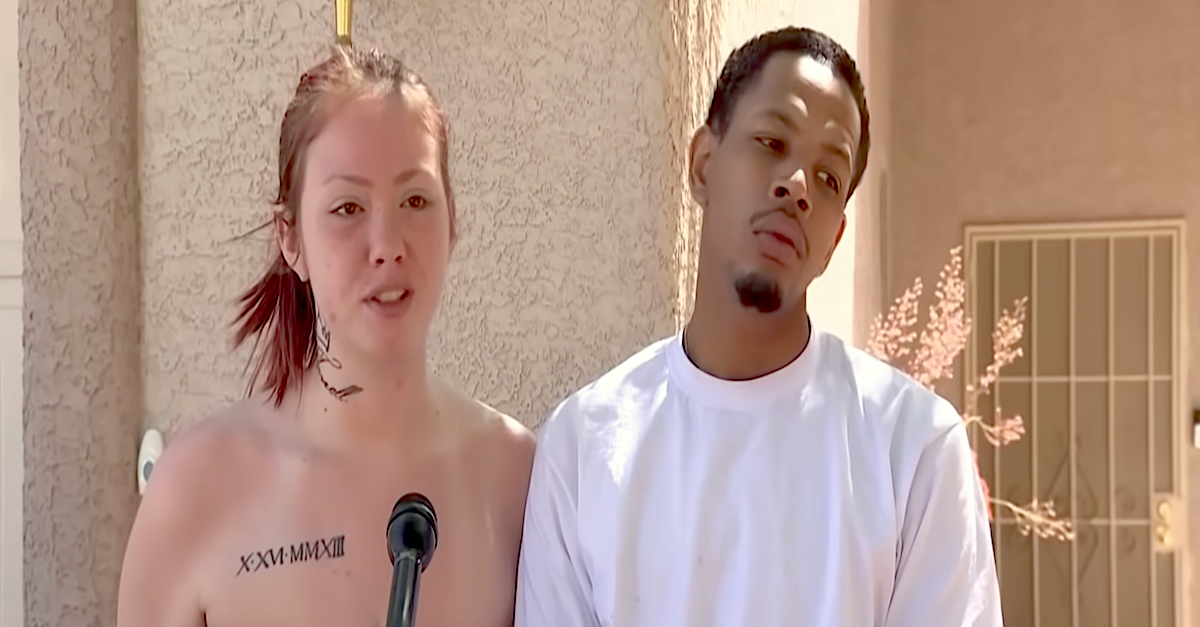 Tayler Nicholson and Terrell Rhodes are seen in a screen grab taken from a May 8, 2021 interview with KVVU-TV. Rhodes would eventually be arrested on suspicion of murder.

“We’re devastated and hoping for the best,” said the baby’s mother Tayler Nicholson in an interview on May 8.

She said she was praying for her son’s safe return and hoping that God was looking out for the boy.

“We just want our baby back as soon as possible in the best condition possible,” Nicholson continued.

Rhodes blamed the child’s father and the father’s sister.

“The father’s saying that his sister didn’t come get him, and if that’s really the case, then where is my son?” he asked, referring to Amari Nicholson as his own son while claiming that the boy’s aunt had something to do with baby’s disappearance.

According to Nicholson, Rhodes said someone claiming to be the sister of the Amari’s father knocked on the door in the early hours of a morning. According to that story, Rhodes was “packing a bag” a woman grabbed the child and took off.

“Why would she take him?” a reporter asked.

“‘Cause the dad wanted to be in the father — in the child’s life,” Rhodes answered. “He didn’t want to see him getting raised by me.”

Rhodes eventually told a lengthy story about his version of events (named and identification are have been added for clarity):

“We had just woke up — I had just fed him breakfast and, um, I was in the room on my phone . . . laying down. He’s in there playing with his toys, and all of a sudden there’s a knock on the door.  And it was a woman saying that she was [Tayler’s] baby daddy’s sister.  And, she says she’s there to pick up my stepson.  I never seen any — any sides of [Tayler’s] baby daddy’s family, so I never — I never recognized her.  So, then I go to proceed to — okay — I’m gonna pack him a bag up — pack some of his belongings, and when that happens, I turn around to call [Tayler] to tell her if this is — are — was this really prearranged.  And as I’m doing that, [the sister] says she don’t need anything for my stepson. They got everything they need for him.  And — basically — just took off.”

“But you didn’t know her though, correct?” the reporter asked again. “You’ve never seen her?”

“Did you not know this person you’re letting take Amari away?” the reporter followed up.

Rhodes said he vaguely recalled his girlfriend saying someone would be picking up the child at some point.

Nicholson then gave an answer that initially seemed to undermine Rhodes’ story before walking it back.

Despite all vague and odd explanations, Nicholson repeatedly insisted that Rhodes loved Amari.

“Terrell loves Amari like it’s — like he’s his own,” she said.  “He’s been the one who’s been taking care of Amari; Amari loves Terrell just as much.”

“At this point, you can’t sit here and say anything negative for a man to be taking care of another man’s baby,” Nicholson said. “He never handed the baby off to anybody.”

“He’s a complete mess over this,” she added.

Rhodes, for his part, said: “If anybody’s got [Amari], bring him back.” You can watch all of this here:

Days later, Rhodes found himself in an interrogation room where video showed him grabbing an officer’s gun.

Rhodes, who has pleaded not guilty to the murder charge, is scheduled to make his next court appearance on June 25.