83-Year-Old Man Kills 89-Year-Old Woman and ‘Lifelong Partner’ Due to Grief Over Her Illness Before Killing Himself: Police 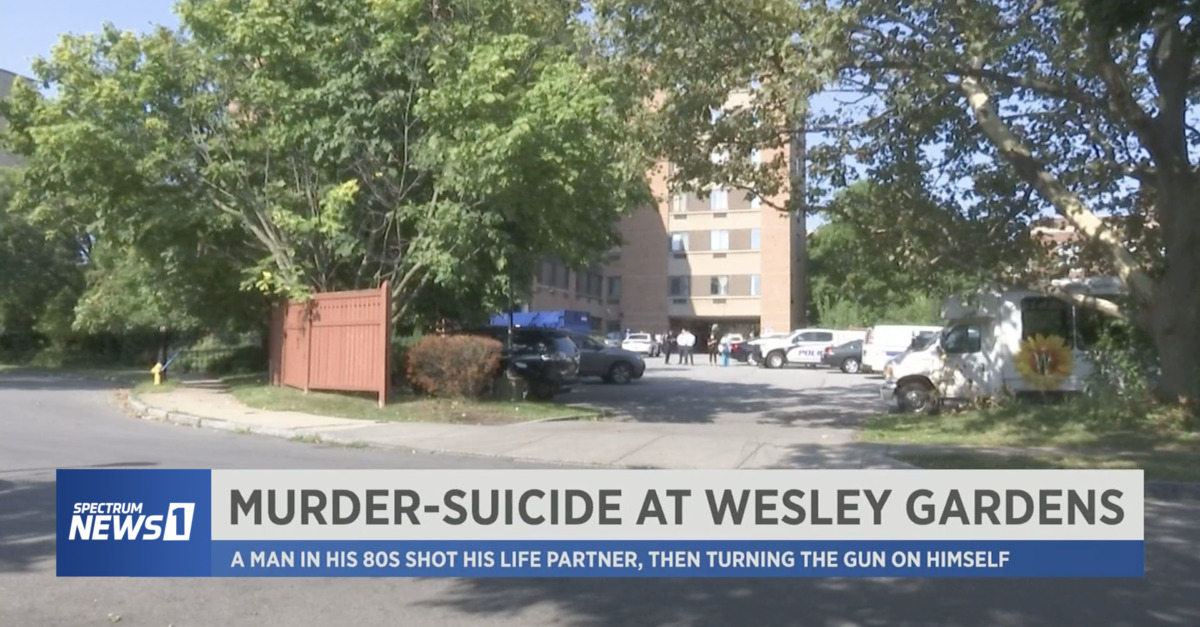 An elderly couple in New York State died as the result of a murder-suicide over the weekend, according to police and caretakers.

The deceased woman and her killer were also described as “lifelong partner[s]” by local NBC affiliate WHEC.

Dubin had reportedly been a resident at the nursing and rehabilitation-focused senior living center for “a couple of weeks” due to her rapidly declining health, according to the Rochester Police Department.

“During the visit the man ultimately shot the woman and then turned the gun on himself. Both were pronounced dead at the scene,” the RPD told local CBS affiliate WROC. “At no time during this tragedy were any residents or staff at the facility in danger.”

Greer arrived for the visit at around 10:00 a.m. and waited until the end of his visit to shoot and kill Dubin and himself, police say. Staff at Wesley Gardens immediately responded to the shots and attempted life-saving measures but those measures were unsuccessful.

“Staff did an excellent job,” RPD Captain Frank Umbrino told New York City-based independent news station Spectrum 1. “I don’t think there is anything they could have done to prevent this tragedy from happening, unfortunately. The decision was made by the individual and this is what he was going to do. Unfortunately, he carried it out.”

Police cast the tragedy as somewhat unavoidable due to the ravages of age and sickness and those impacts on the shooter.

“From what we are gathering, her partner was having a difficult time dealing with her deteriorating condition and unfortunately this was a tragic step that was taken,” Umbrino added in comments to WHEC.

Staff at the nursing home called 911 just after discovering the dismal scene in Dubin’s room, according to WROC.

“We thank the Rochester Police for their prompt response,” Wesley Gardens Vice President of Clinical Operations Amy Krause said in a statement. “We send our condolences to their families and loved ones.”

The nursing home is currently in the process of attempting to contact Dubin’s relative(s) and is working with the RPD’s Major Crimes Unit to do so, the outlet reports.

The RPD is reportedly still conducting an investigation into the tragic incident, according to local ABC affiliate WHAM.

“She was a character, but a lovable one,” a friend of Dubin’s recalled on a Facebook post dedicated to her memory. “I remember her 20 minute naps each day in someone’s office who was out of town. She ran the fax room like it was her own company.”

Others also remembered her as a “character,” “dear friend,” and “sweet person” as well as someone who often said she was “good friends” with Bob Dylan.

As Law&Crime has previously reported, an epidemic-like spate of murder-suicides have become part of the increasingly grim picture of gun violence that has increased apace in the United States over the past year-and-a-half, more or less coinciding with the advent of the novel coronavirus pandemic in early 2020.

According to the National Gun Violence Memorial, at least five other fatal shootings have occurred in Rochester, N.Y. in the past two months alone.