3-Year-Old Boy Shot and Killed; Teen Injured in Wave of Weekend Violence: ‘Do Not Let Yourself Believe This Is Inevitable’ 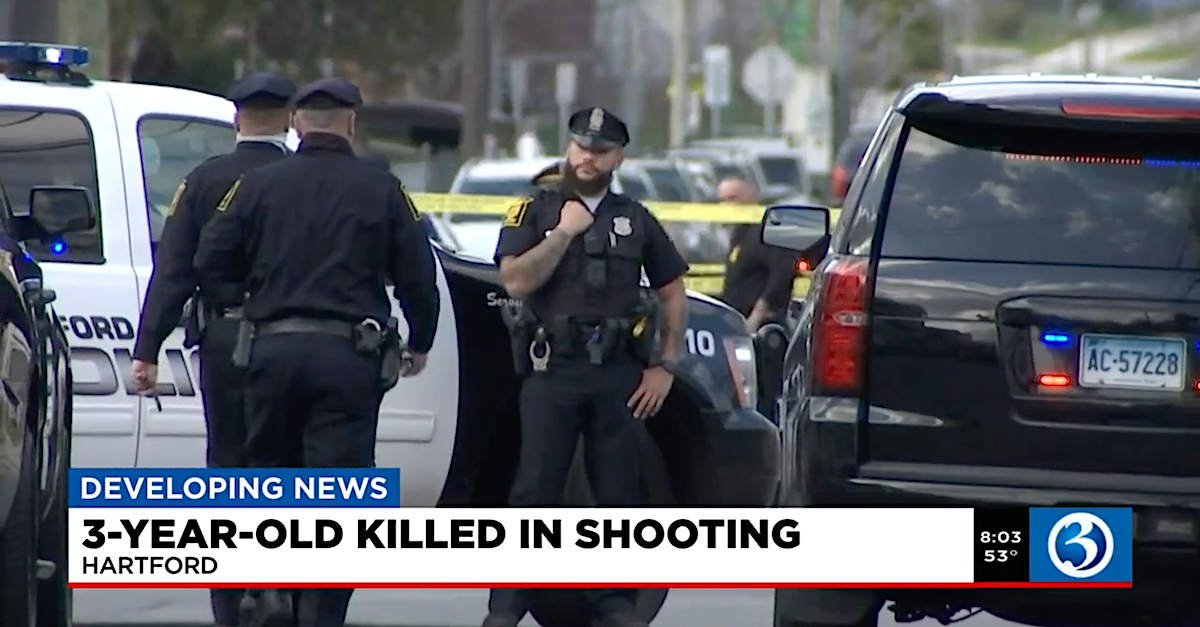 A 3-year-old Hartford, Conn. boy died after being shot Saturday at around 2:20 p.m. on Nelson Street in the city’s north side. The Hartford Courant phrased it this way: the child was an “apparent unintended victim of a drive-by shooting during a frantic day filled with gunfire in the capital city.”

Police were alerted to the shooting by automatic gunfire sensors. When they arrived at the scene, they learned the boy, Randell Jones, of Enfield Street, had already been taken to the hospital where he later died, according to reports by Hartford CBS affiliate WFSB-TV.

Police want to know more about a black Honda Accord which stopped alongside a second vehicle before the shots were fired. A passenger in the Accord is suspected of being the triggerperson who fired into the other vehicle. The Accord was stolen from Windsor Locks, Conn., and was later found empty, police told the TV station.

The person police believe was the intended target was “a male passenger” of the second vehicle who later “fled the scene on foot,” WFSB said. The television station and the newspaper both reported that the car was also occupied by a mother and three children — “ages three, four, and five.” The three-year-old is the one who died.

While the TV station was covering the first shooting, an alert of another shooting less than a mile away sent police scrambling — but police do not think the shootings are factually related beyond their happenstance proximity to one another.

Two teenage boys were struck at the scene scene. One of them, Ja’Mari Preston, 16, of New Britain, died. A 17-year-old survived, the Courant said. One witness told the paper that shots were ringing out “for several minutes.” Children are among the reported witnesses.

Another witness, who would only provide her first name as “Melissa,” told the Courant that gun control was the only fathomable answer.

“They need to go around and find the people who have all these guns and just take them away,” she said.

Police Chief Thody said uniformed and plainclothes officers are watching the city in the event of additional violence — including retaliation.

“The response from government to this cannot be nothing,” the senator said on Twitter. “A 3 year old is dead. Do not let yourself believe this is inevitable. And the flow of illegal guns into places like Hartford is made possible by the holes in our background checks system.”

The response from government to this cannot be nothing. A 3 year old is dead. Do not let yourself believe this is inevitable.

And the flow of illegal guns into places like Hartford is made possible by the holes in our background checks system. https://t.co/y735g4oZec

“This is a painful day for our city,” Hartford Mayor Luke Bronin said. “Our whole city is grieving tonight.”

This is a painful day for our city. This afternoon, a three year old child was shot and killed on Nelson Street and a young man was killed on Magnolia Street not long after. Our whole city is grieving tonight. pic.twitter.com/ZJt8x3wp6f

“The violence seen today typically is common during warmer weather,” WFSB said in an effort to put the violence into context.

Additional officers with the Connecticut State Police have been deployed to Hartford to assist with the cases.

The family of the 3-year-old victim offered words of remembrance at a Monday vigil.

“He was always playful, laughing. He was so smiling with everybody,” said Nidia Garba, a relative, in a WVIT-TV report. “I hope and pray to God to get justice.”

[image via screen capture from WFSB-TV]