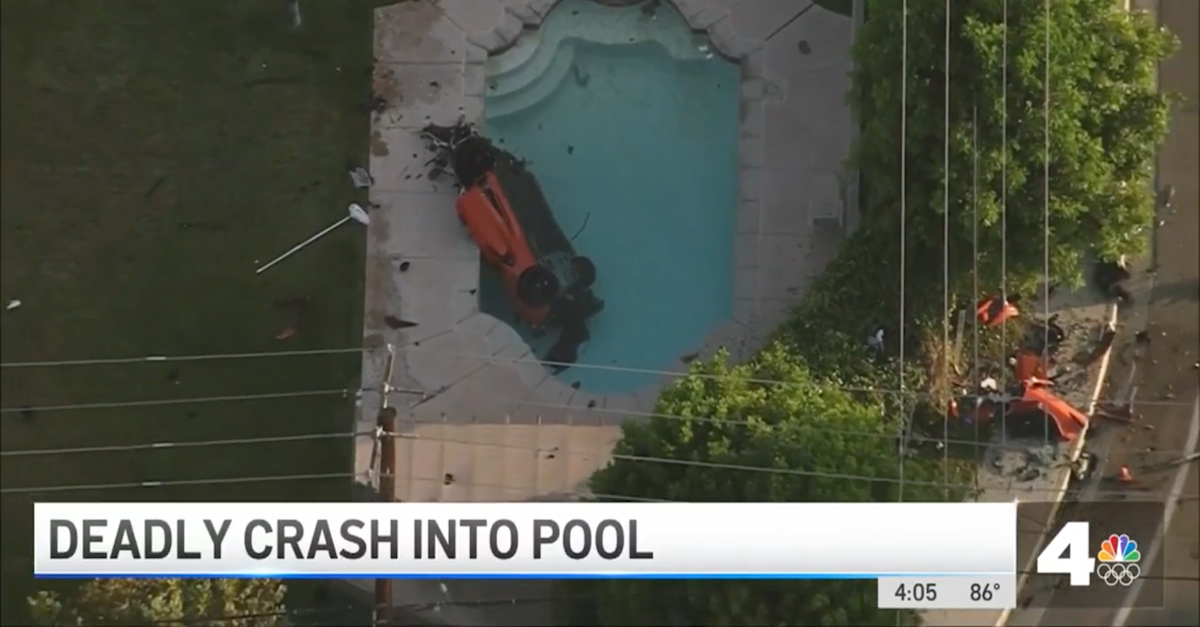 Police in Chino, California say two people are dead and one person is in serious condition after a Corvette driver “struck a center median and became airborne” around 2 a.m. Wednesday morning.

“The vehicle came to rest in the pool of a nearby backyard,” a Facebook post by the police department indicates.

The remainder of the police narrative goes like this:

The crash happened near the intersection of Schaefer Avenue and East End Avenue, the police said.  The victims were not immediately identified.

Images from the scene showed part of the wrecked car’s frame sitting on the far side of the pool — away from the tall concrete-looking fence which bordered the property — while part of the car rested on the rim of the below-ground basin.  The rest of the car’s frame cluttered the sidewalk between the street and the fence.  Other damage was visible in television images taken from the median curb the car is initially believed to have struck when it failed to negotiate a sharp curve.

“Investigators say it’s unclear if drugs or alcohol played a role or if anyone was wearing a seatbelt, but they say speed was a major factor,” Log Angeles NBC affiliate KNBC reported.

Deborah Laugherty told that television station heard the crash but did not hear “screeching or anything” that would indicate “they tried to stop.”

Other neighbors told the television station that street racing is a problem in the area and that many vehicles pop their tires on a concrete curb on a curve where the car became airborne.

“I went out of my kitchen door and I see a girl laying on my deck,” said a person identified by KNBC only as “Art.” He who owns the property — and the pool — where the mangled vehicle came to rest.

“I heard a loud screeching — or I don’t know what — but then I heard a bang,” the homeowner said. “And I hear some moaning and groaning over here.”

“The officer was talking to her, ‘stay awake, stay awake,’ trying to keep her up,” Guerrero said of the young woman who was seriously injured but who survived.

Guerrero told Los Angeles ABC affiliate KABC that he was glad his grandchildren were not in the pool swimming when the crash occurred.

It is unclear which of the three victims was driving the car.

The local police department is asking for anyone with further information to reach out and contact them.

[Images via screengrab from KNBC]