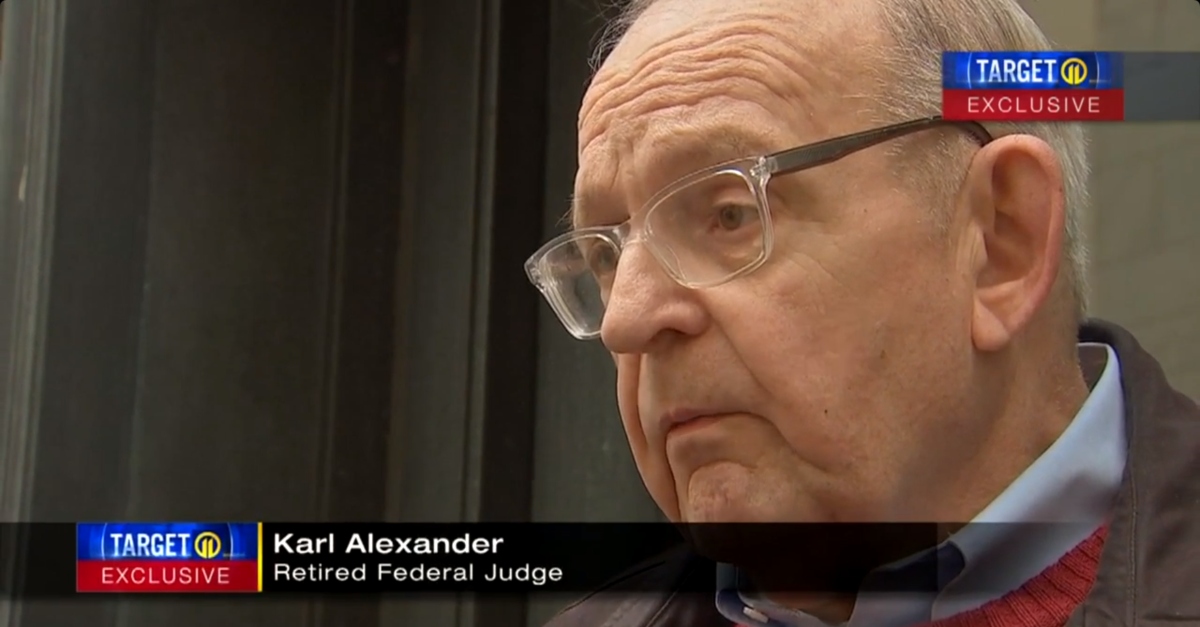 A retired administrative judge has admitted to buying a gun for a “nazi sympathizer.” Karl Alexander, 78, pleaded guilty in Pennsylvania federal court on Friday to making a false statement to a licensed firearms dealer, according to The Department of Justice. He said he did this for friend, housemate, and convicted felon Dennis Alan Riggs, 50.

“Why did you purchase a gun for an alleged Nazi sympathizer?” WPXI reporter Rick Earle asked in an on-camera interview.

Strictly speaking, he got in trouble for lying on an ATF form, writing “yes” when asked if he was the actual buyer for a Ruger AR556MPR, which is an AR-15 style rifle. Prosecutors said he was buying this for Riggs, who was convicted of aggravated assault in Pennsylvania back on March 30, 1994. Alexander now says he “deeply” regrets doing this. Sentencing in his case is set for July 15. The prosecution recommends he spend two to three years behind bars. (The maximum sentence is 10 years.)

Riggs is charged with possession of a firearm by a convicted felon. His case is pending in the Western District of Pennsylvania, and records viewed by Law&Crime show no plea. An attorney of record did not immediately return a request for comment.

Prosecutors said they executed a search warrant at his home on January 22. This revealed Riggs’ weapons cache, and an “obsession with hate-based violence.” From The Department of Justice:

Investigators said they found a load of Nazi material: a video on Riggs’ phone showing him wearing “Nazi apparel,” doing Nazi salutes, and “loading and unloading an AR-15 style rifle”; a video of the 2019 Islamophobic mass shooting in Christchurch, New Zealand; images of Riggs with guns; and a picture of convicted racist mass shooter Dylann Roof, with that inmate’s federal prison contact information.

“Riggs decorated his house with Nazi and Hitler posters and pictures; possessed numerous other weapons, knives and daggers; and had hundreds of bottles of liquor and alcohol,” the DOJ said. “The government also presented evidence showing six of the seven guns found during the search were loaded.”

Alexander told WPXI that he was aware of all the Nazi memorabilia. He said it was “all over the walls,” but said that he didn’t see Riggs as a violent person, and “I had no idea how he was involved in weaponry.”

The retired judge said Riggs “likes Germany. But I never would see him as being one to go out and demonstrate, or start any kind of riots up, or anything like that. And certainly not to go arrange to shoot somebody.”