No Charges for Principal Melissa Carter

Principal Who Paddled 6-Year-Old Child Won’t Face Criminal Charges; Mother Asked That the ‘School Spank the Child for Her’: Prosecutors 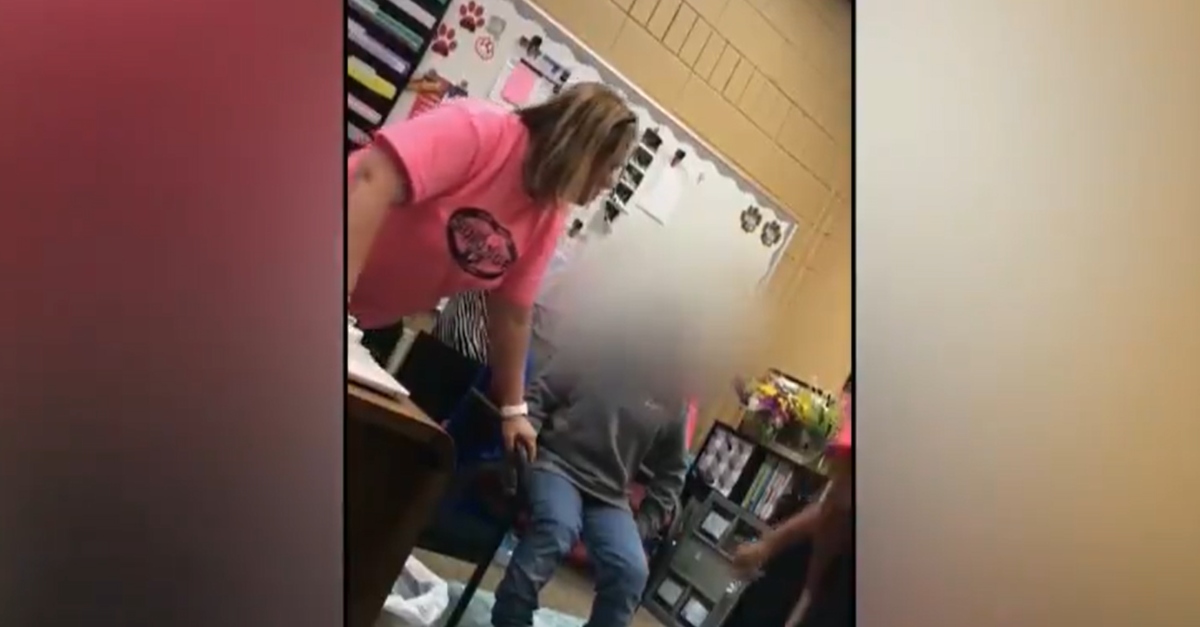 There will be no charges for a Florida school principal seen on video paddling a 6-year-old girl. An administrator told authorities that the mother “requested that the school spank the child for her,” an account prosecutors found credible.

The three-page memo from the office of State Attorney Amira D. Fox clears Melissa Carter, whom authorities determined coordinated the paddling with the mother’s permission.

“It is of note that edited portions of the full video appear to have been cut and released to the media at different times, and have resulted in an incomplete and misleading account of the incident to the public,” Deputy Chief Assistant State Attorney Abraham R. Thornburg wrote in a letter to Sgt. Thomas Lewis of the Clewiston Police Department.

Carter is the principal of Central Elementary School. She and school clerk Cecilia Self were being investigated in the paddling of a 6-year-old girl in front of the child’s mother.

The mom said she let it happen because she was afraid and secretly recorded it. Corporal punishment is legal in Florida, but Hendry County, where this happened, does not allow it, a local CBS station noted.

“Nobody would have believed me. I sacrificed my daughter, so all the parents can realize what’s happening in this school,” she told CBS affiliate WINK News in an anonymous interview translated from Spanish.

The mother claimed that the school called her on April 13 to tell her the 6-year-old damaged a computer, and the fee would be $50. The mother said that she wanted to pay the money, but she was brought to the principal’s office with just her daughter, Carter, and Self.

“My daughter was already in the office,” she said. “The principal started to scream.”

Her attorney Brent Probinsky told CBS This Morning that his client did not expect the paddling to happen.

“It happened very quickly,” he said. “And the mom said, ‘I was so astounded, I was so shocked, I was just frozen for a few moments when she was paddling my child.'”

The lawyer told WINK that what happened was aggravated battery. The prosecutor’s office did not construe it that way.

They cited statements from Carter and Self. According to the prosecutor’s office, these school administrators said Self called the girl’s mother to say that she would be charged for damage to computer equipment. Self allegedly said that the mother replied that her daughter was also damaging things at home. The mom allegedly said that she was afraid to discipline her daughter through spanking because the 6-year-old girl threatened to call cops and the “DCF,” an apparent reference to Florida’s Department of Children and Families.

According to authorities, Self claimed that it was the mother who suggested the school spank the girl for her. Self says she replied that they could do this, but the mother would have to go to the school and be there when the spanking happened if she wanted the school staff to do it.

The way prosecutors construed the video is that Carter and Self made sure to position the girl so she could be safely spanked and that their statements on the video matched with the account that the mother asked them to do this in the first place. The prosecution did not see the mother’s acquiescence as fear, but actual consent, with her saying “thank you” toward the end of the footage.

Prosecutors said that an interview with the child was consistent with that account, though this portion is redacted from the letter published on the state attorney’s website.

According to the prosecution letter, the mother told Hendry County deputies that there was a language barrier, and she had been “confused,” not correctly understanding the process surrounding the paddling. Prosecutors said she did not return calls from the Clewiston Police Department. Probinsky called back, asking whether she would be a suspect of criminal misconduct.

Thornburg also took note of the mother’s statement to WINK about having “sacrificed” her daughter.

“Such a statement that she knew all along that the paddling was going to occur is wholly inconsistent with her initial statement to law enforcement that she was confused and did not consent,” he wrote.

In a statement to Law&Crime, Probinsky said that Fox botched the reading of the law, and he maintained that Carter and Self committed aggravated battery because of the use of the paddle.

“The State Attorney, Amira Fox, failed to consider the clearly written law that applies in this case that prohibits any corporal punishment of any kind, including paddling, in all Hendry County public schools,” he wrote. “Instead, Fox mistakenly applied the law that governs in some other Florida counties, where corporal punishment in public schools is still permitted or where a parent is allowed to physically punish his/her own child. In those circumstances where corporal punishment is permitted, a state attorney, when considering whether or not to file criminal charges, must consider several factors, including whether the physical punishment was reasonably related to the offence, was excessive or harmful to the child and if it had an educational purpose. State Attorney Fox in this case mistakenly considered the issue of whether the paddling of this first grader was reasonable and not excessive, and she decided it was reasonable and not excessive. Instead, she should have simply asked if it was legally permitted at all in any Hendry County public school. The answer is clearly, ‘no.’ Any paddling is illegal in every Hendry County public school and is a criminal battery.”

He also dismissed the state attorney’s assertion that the mother gave permission for the paddling.

“Every school principal who paddles a student is sure to get written permission from the parent for such a serious punishment but there was none from the mother, who went to the Sheriff’s Office the next day to file a complaint against the principal,” he wrote. “Though the mother did not give permission, the State Attorney in her flawed logic, thinks a parent can give permission to another to commit a criminal act against their child and the actor is therefore absolved of criminal consequences.”