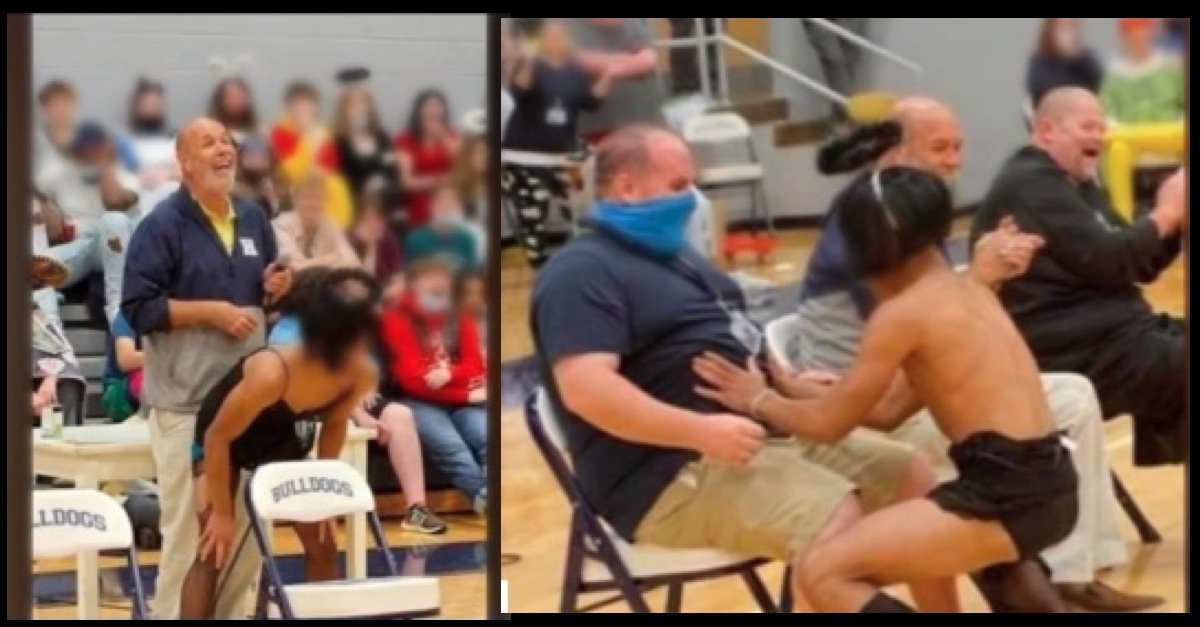 A Kentucky high school is in the spotlight after photos of students wearing skimpy clothing and appearing to dance suggestively for the principal and staffers went viral.

The pictures were taken during Homecoming festivities at Hazard High School, according to a statement from superintendent Sondra Combs.

One picture shows Hazard High School principal Donald “Happy” Mobelini—who is also the mayor of Hazard—laughing as someone believed to be a student does what appears to be a sexually suggestive dance directly in front of him.

Another photo shows a student in a red bikini or lingerie, straddling an adult’s leg. The student’s hand is wrapped around the back of the adult’s head.

In one picture, a shirtless student is squatting before an adult and touching his torso.

One picture appears to show a group of girls dressed as waitresses from the restaurant Hooters, carrying mugs with what appears to be beer inside.

In all the pictures where adults are seen, they are smiling or laughing at what the students are doing. 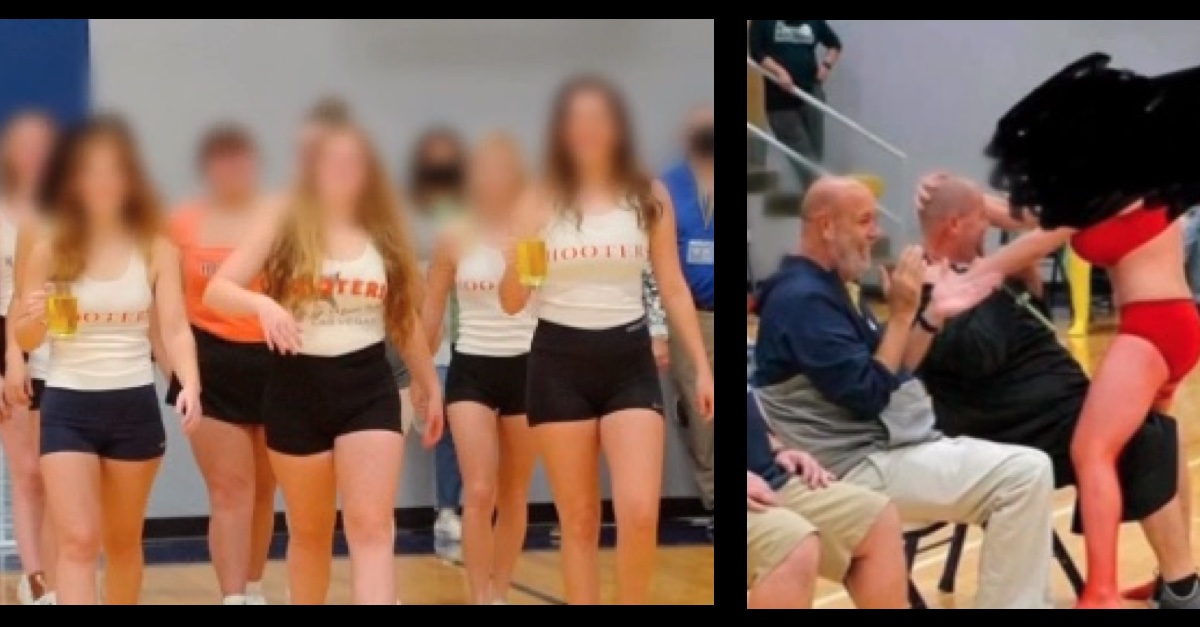 According to local NBC affiliate WLEX, the pictures showed the so-called “Man Pageant.”

The Hazard High School Athletics department apparently posted the pictures to its Facebook page, which has since been blocked from public view.

Um. Exactly what is going on here, y’all? C’mon Hazard. Get it together. 🤦🏼‍♀️ pic.twitter.com/GZQCdYnpbF

The Kentucky Department of Education said on Twitter Wednesday that it is investigating the incident.

The @KyDeptofEd is aware of an incident involving @HazardInd & has been in contact with the superintendent, who has informed us that it is under investigation. (1/4)

As WLEX reported, some in the community were concerned with what they saw, while others didn’t see a problem.

“The way that I think about it, is I think that, yes, the kids should just be kids, and they should be allowed to have fun,” said Jenna Smith, who has a family member at the high school. “But is giving a lap dance or witnessing somebody else give an adult a lap dance? Is that a child-appropriate activity? And to me, it is not.”

She says the event should have been shut down the moment an adult realized students were undressing.

However, not all parents agree.

Hollie Layne, whose son participated in the homecoming activities, said that no one was hurt, and the pictures were taken out of context.

“If everybody is perfect then I would say yeah, maybe we do need to rethink something,” Layne told WLEX. “But until somebody can prove that something is going on here other than just homecoming week and teenagers being teenagers then I will support my kids.”

Combs, the superintendent, said that the pictures show a fun activity that just got out of hand.

“The activities were part of Homecoming festivities and were driven by the students. We strive to foster creativity in our students, but unfortunately, this time it was carried too far. Spirit Week at Hazard High School has a long and celebrated tradition. Homecoming activities were planned as a celebration for students, staff, and the school community. All were intended to be fun and good-natured however, the activities did not play out as intended. While Homecoming is an annual tradition, there has never been any issue raised prior to this year. Now that an issue has arisen, we are taking this opportunity to review policy and procedures to make certain that it does not happen again.”

Combs said that disciplinary action has been taken, but the statement did not provide any additional details. She also said that students and staff would receive social media training: “We would hate to see a single youthful indiscretion haunt one of our children for their entire life.”

The statement also said that future costumes would be reviewed, and the school’s dress code “will be enforced in the future at all school activities, for both males and females.”

Combs said that in this case, the desire for fun won out over good judgment.

“At the end of the day, the light-hearted activity simply got out of hand, and for that, we apologize. In the future, we will strive to keep the lighthearted, fun nature of school activities without the inappropriate behavior. We will continue to seek to involve our students and foster their creativity, but with more direction. They are young and we will be there to offer better guidance for their ideas in the future. We love our students and only want to provide them with the best education and foundation for a successful life. We only ask that not judge a district with a century long tradition of striving for excellence on a single incident where fun trumped judgment.

Our district would like to apologize for the activity that has been portrayed in the media and we regret how this has unfolded. This is not the type of event that typically occurs here at Hazard High School, and we sincerely regret any embarrassment this has caused our school community. We love our Hazard High School students, staff, and community at large.”