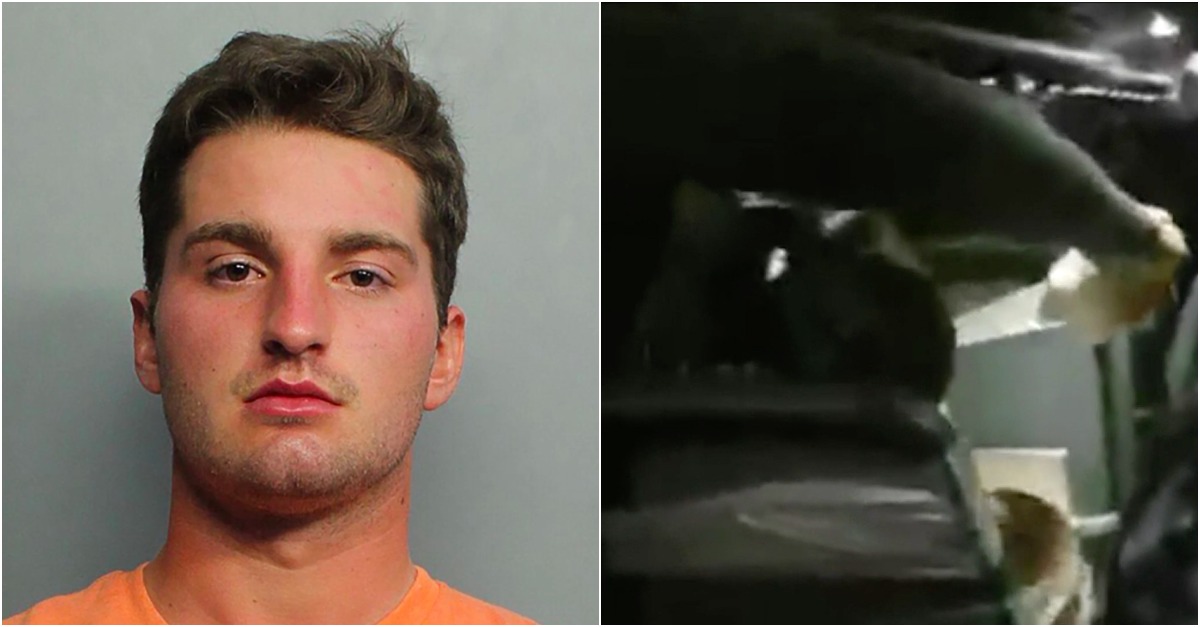 UPDATE: the flight attendants who restrained an apparently visibly-intoxicated and irate man with duct-tape–because he was violent and sexually aggressive during a flight–have been suspended “pending [an] investigation.” Law&Crime’s original story appears below.

An Ohio man was duct-taped to his seat on a commercial airplane late last month after allegedly attacking and inappropriately touching multiple flight attendants on the way from Philadelphia to Miami.

Maxwell Berry, 22, stands accused of three counts of battery over an incident onboard Frontier Airlines flight that slowly, then quickly, spiraled out of control. The incident appears to have been fueled by alcohol.

A police report cited by Philadelphia-based ABC affiliate WPVI alleges that Berry ordered and downed two alcoholic beverages before requesting a third. At or around this point, the defendant also allegedly brushed his empty cup up against a flight attendant’s backside.

The flight attendant said “don’t touch me” in response to the “inappropriate” touching and then Berry started complained about his gum before putting it into a napkin, the police report continues.

Eventually served his third, the defendant promptly proceeded to spill the new drink on his shirt. He then went to the bathroom, police claim, and returned shirtless. Apparently not quite yet fully exasperated with their troublesome passenger, a flight attendant then helped the defendant get another shirt out of his carry-on luggage.

Next, Berry allegedly walked around the plane for some 15 minutes before allegedly groping the breasts of two female flight attendants–repeatedly.

“He came up from behind and put his arms around both of them and groped their breasts again,” the police report claims.

After those alleged sexual assault incidents, a male flight attendant was assigned to watch Berry for the remainder of the flight.

Then things decidedly took a turn for the violent.

The final hectic moments of the flight Berry took were caught on cellphone video by a passenger sitting directly behind him.

“You guys fucking suck!” Berry can be seen shouting at one point in the footage.

An unedited snippet of the defendant’s diatribe can be seen below:

Frontier passenger allegedly touched 2 flight attendants breasts, then screamed his parents are worth $2 million, before punching a flight attendant. Frontier suspended the crew for duct taping the passenger to his seat as they landed in Miami. 22 yr old Max Berry is in custody. pic.twitter.com/4xS9Rwvafx

Later, the defendant began punching the male flight attendant unprovoked. Berry was quickly hugged into submission as his flailing fists appeared to barely connect or do any real damage.

After the physical confrontation, the defendant was duct-taped to his seat as many of the other passengers on the plane commend the flight crew for shutting down the unruly and angry young man. Hoots, laughter and cheers–as well as one person proclaiming, “finally!”–can be heard off-screen.

“Help!” Berry can be seen and heard screaming in the video.

As the plane prepared to land, however, the defendant allegedly began to calm down.

After being unwrapped from his seat upon arrival in Florida, the defendant was arrested and booked into the Miami-Dade County Jail – TGK Correctional Center.

During a flight from Philadelphia to Miami on July 31, a passenger made inappropriate physical contact with a flight attendant and subsequently physically assaulted another flight attendant. As a result, the passenger needed to be restrained until the flight landed in Miami and law enforcement arrived. The flight attendants will be, as required in such circumstances, relieved of flying pending completion of investigation of the events.

A later statement from the airline noted that “[u]nfortunately, the proper policies for restraining a passenger were not followed” and “the flight attendants involved have been suspended pending further investigation.”

Editor’s note: this story has been amended post-publication.