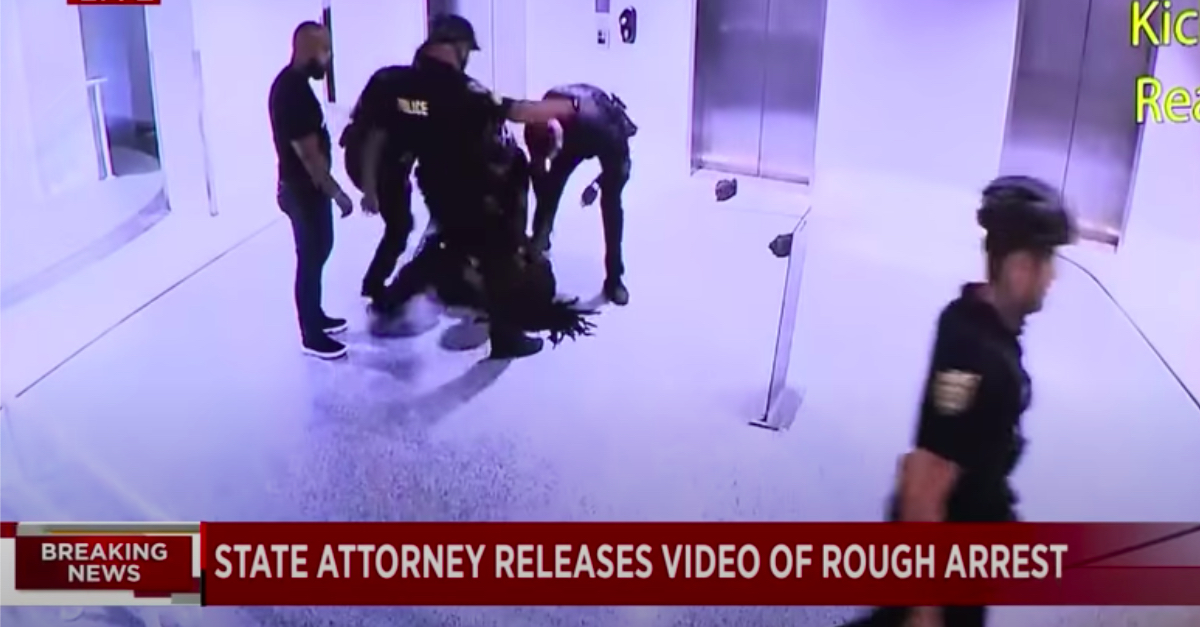 Prosecutors in Florida on Monday announced that five police officers in Miami Beach had been removed from duty, arrested, and charged with battery for allegedly using excessive force during a July arrest of two men in a hotel lobby.

All five suspects surrendered to law enforcement soon after the press conference.

The incident that led to the charges took place July 26 at the Royal Palm Hotel and was captured by the building’s surveillance camera. Rundle also released footage of the arrest captured on body cameras worn by the arresting officers.

The footage appears to show a swarm of 21 officers converging on 24-year-old Daltona Crudup in the hotel lobby. Crudup had been riding a motorized scooter when he allegedly crashed into an officer on a bicycle, sending the officer to the hospital and leaving him on crutches, per a report from NBC News.

The surveillance video appears to show Crudup running through the lobby and getting into the elevator in an apparent attempt to evade the police. When an officer reaches the elevator before the doors close, Crudup appears to comply with his requests to get out of the elevator and lie on the ground with his hands behind his back.

But after Crudup is cuffed on the ground with his hands behind his back, at least one of the officers appears to kick him in the face several times while another seems to repeatedly lift him up and drop him back to the floor.

“When we see this, it’s alarming, it’s disturbing. There’s so many adjectives that we could use to describe it,” Rundle said of the arrest.

After police were through arresting Crudup, several officers turned their attention to a bystander, 28-year-old Khalid Vaughn, who had been filming the arrest on his cell phone.

Body-worn camera footage appears to show Officer Sabater tackling Vaughn into a concrete pillar as the civilian was following a different officer’s orders to back up.

Rundle said that after Vaughn was tackled, Officer Rivas hit him with “a series of punches in the back rib cage area.” Vaughn was then arrested on charges of resisting an officer and interfering with law enforcement. Rundle said her office dropped the charges against Vaughn the same day he was arrested.

“Excessive force can never, ever be an acceptable solution,” Rundle said, adding that she wasn’t the only official upset by the videos.

“I watched [Chief Clements] watch that video, and he [slammed his hand] right down on the desk, so we’re all really horrified by it,” she noted.

Chief Clements was also forthcoming with his condemnation of the officers’ conduct.

“This is by no means at all a reflection of the dedicated men and women of the Miami Beach Police Department,” Clements said. “Moving forward, I can tell you that my staff and I promise you, as individuals and as an agency, we will learn from this, and we will grow from this, and we will do better. This is not what you see from officers.”

Fraternal Order of Police (FOP) President Paul Ozeata told The Miami Herald that he couldn’t comment on the officers’ actions until he studied the video further, but said they were all being represented by FOP attorneys.

“They deserve their day in court, just as everyone else does,” Ozeata told the Herald.

Watch the press conference and video below.