Maskless Trader Joe’s ‘Karen’ Says She Acted Like a ‘Normal Human Being’: ‘I Started Yelling in Self Defense’ 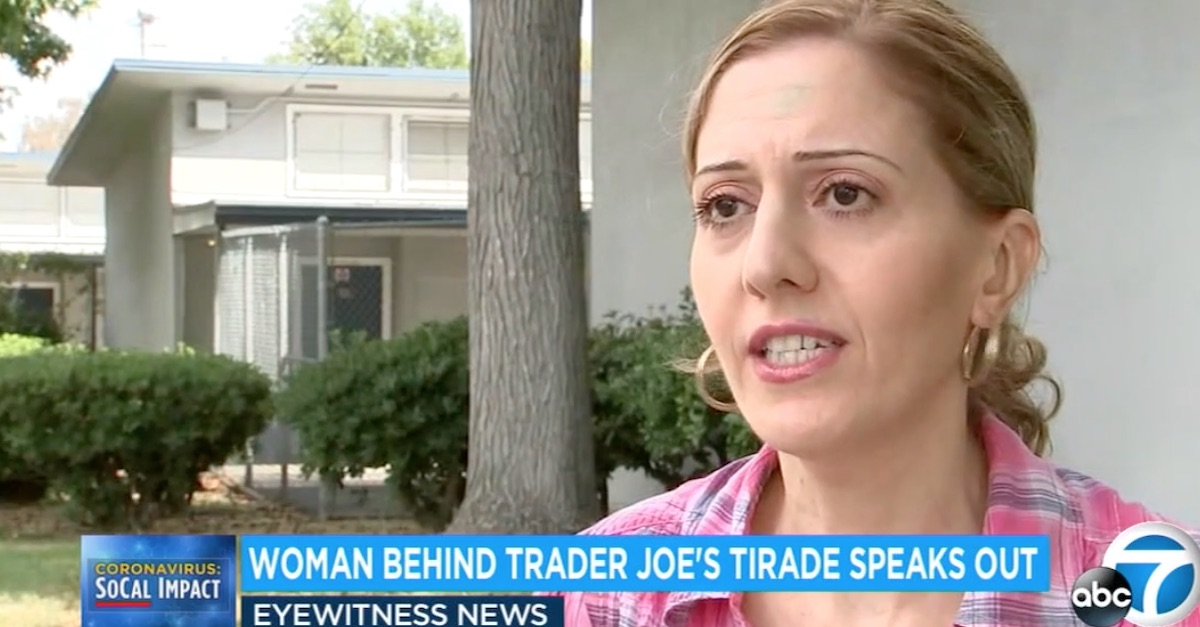 A maskless so-called “Karen” who went viral over the weekend for her outburst at a Trader Joe’s in North Hollywood, California says that she acted like any “normal human being” would if harassed by a man, saying she “started yelling in self defense.” The woman, who called her perceived tormenters “Democratic pigs,” also said that she had “no political agenda.”

The woman asked not to be identified by name but appeared on camera for an interview with KABC.

She claimed that a man harassed her and cursed at her, so she responded by yelling in self defense.

“Right away he started using obscenities at me, saying ‘f you,'” she said. “I did what any normal human being, a woman, would do if she was being harassed by a man, not knowing if he’s a crazy man, so I started yelling in self defense.”

The woman said that it is a lie to claim that she had a political agenda. What she said in anger “doesn’t matter,” she said.

“Unlike whatever lies they are putting out there, I had no political agenda. I had nothing. They might use whatever else I said later in my anger, it doesn’t matter. What happened to me should not be happening to anyone else,” the woman said.

The original videos of the incident was viewed millions of times after being shared on Friday by Los Angeles-based actor D. Giles. The videos in question:

“You’re a fucking bitch!” the woman yelled, she said, after a man hurled obscenities at her for not wearing a mask. “You’re fucking Democratic pigs, all of you!” the woman, who claimed to have no political agenda, added.

The person who recorded the video commented, “This is day one. This is opening day of Trader Joe’s in North Hollywood. This is Karen.”

The woman also claimed that she had a “breathing problem,” that her “doctor would not let [her] wear a mask,” and that people “harassing [her] to wear a mask” were “violating federal law.”

It’s unclear what law she claimed they were violating, but it’s possible that she could have been referring to a “face mask exempt card” scam that the DOJ debunked days ago. That is speculative, but it is worth noting because the cards 1) claim to exempt people from mask-wearing ordinances and 2) say that violating that purported exemption would be to violate federal law. What the cards say:

I AM EXEMPT FROM ANY ORDINANCE REQUIRING FACE MASK USAGE IN PUBLIC.
Wearing a face mask posses [sic] a mental and/or physical risk to me. Under the Americans with Disability [sic] Act (ADA), I am not required to disclose my condition to you.

According to KABC, the woman did not provide any details about the “breathing problem” that she says caused her doctor to advise against wearing a mask.

Many have suggested that a person with such a condition should avoid, as much as possible, going to enclosed public places while a novel respiratory disease plagues the nation. Others have suggested finding alternatives like having groceries delivered or asking a friend to help. There could be situations, however, where these alternatives are not possible.

A number of people have said that wearing masks amid the coronavirus pandemic itself makes it more difficult for them to breathe. A woman told NBC Connecticut in May that she has a pulmonary condition that makes it difficult for her to breathe whether she is or isn’t wearing a mask. But when wearing a mask, she said, “it was like trying to breathe through a whole bunch of cotton balls.”

Doctors have said that the solution isn’t to avoid wearing masks entirely, but to find one that works well for the person. Medical experts have also said that wearing masks could save thousands of lives.

Others have said that wearing masks dredged up trauma of past abuse.

“This mask caused more trauma to me,” a Kentucky woman said in April. “It brought back all of the past, everything that happened to me.”