Man with 22 Aliases Arrested, Charged with Grand Theft After Pretending to Be a Lawyer

A man with nearly two dozen aliases who allegedly pretended to be a lawyer has been arrested in Los Angeles and charged with grand theft, perjury, and pretending to be a member of the California state bar.

Efferin Deans, 54, is accused of falsely claiming to be a licensed attorney and offering legal services in family law and personal injury cases, the Los Angeles District Attorney’s Office announced Monday in a press release.

“Between January 2019 and September 2021, Deans is accused of claiming to own The Law Offices of Deans & Associates in Canoga Park,” the press release said. “He is also accused of filing court documents and appearing on the record as a licensed attorney. He allegedly provided victims and court staff with business cards and other indications of his standing as an attorney to get them to pay him retainers and fees.” 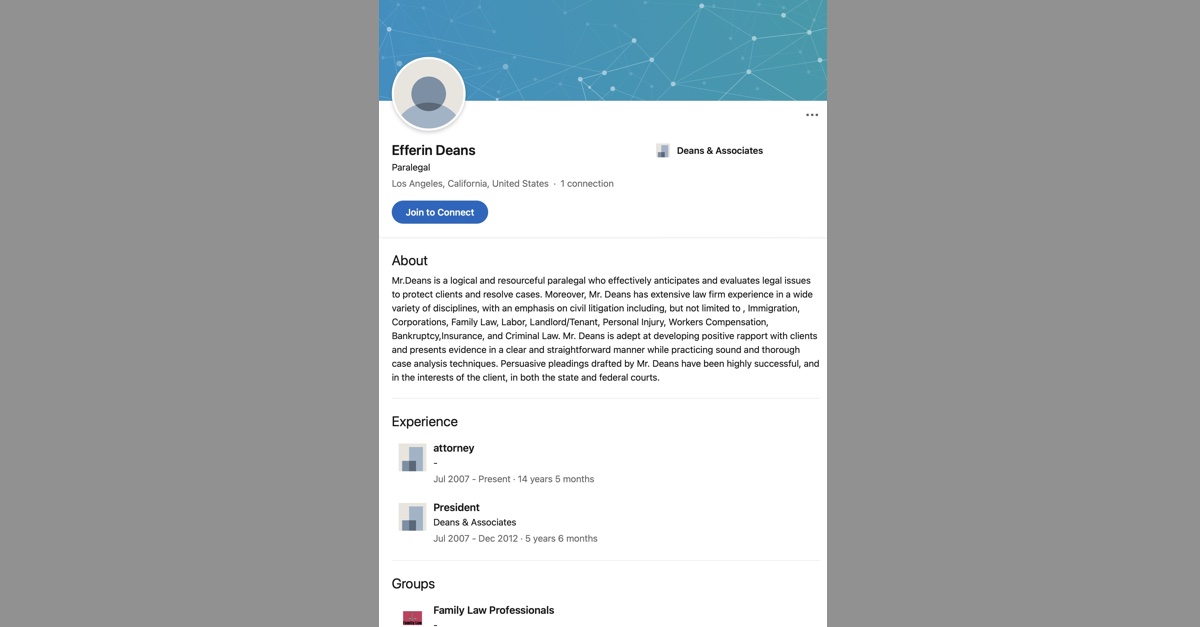 According to the complaint filed Wednesday, Deans allegedly stole nearly $1,000 each from three separate people from January 2019 through September 2021.

The complaint also said that Deans was convicted in 2010 of pretending to be a lawyer. That conviction, it seems, was not the first time he had been caught impersonating an attorney.

According to a 2007 report in the local southern California newspaper Redland Daily Facts, Deans was accused in 2007 of using at least four different lawyers’ identities.

He also had been charged with burglary or grand theft of at least 10 people since 1996, according to the Daily Facts report, and, despite not being a lawyer, represented himself in at least two cases. The report states:

Deans also represented himself for most of the time in both his 1997 and 2005 cases, although he never had to question witnesses, as he waived his right to a preliminary hearing, and then agreed to plea deals with prosecutors.

In the latter case, which began in 2003 and ended with his conviction in 2005, Deans originally agreed to a suspended five-year sentence April 19, 2004, and was released on condition he check into a Los Angeles halfway house.

Eleven days later, a warrant was out for his arrest after the halfway house reported that he never showed up. Two months later he was picked up by police.

Deans’ 1997 conviction was not only for identity theft, but for terrorist threats, the Daily Facts story said, after he threatened a Los Angeles County sheriff’s deputy working at county jail. He also allegedly has a 1986 armed robbery charge, according to the story.

In addition, Deans has been involved in several federal cases, including one that landed him in federal prison, the Daily Facts story said.

The latest complaint against Deans lists 22 separate aliases. Some of them are the same as, or similar to, those he has previously used; for example, according to the 2007 story, Deans held himself out as Kenneth Aslan, and last week’s complaint includes the aliases “Kenneth Alson” and “Kenneth Ashlon.”

Deans had impersonated an attorney named Ramit Mizrahi, according to the 2007 report; the latest complaint has multiple variations on that name, including “Ishmael Mizrahi,” “Ishmael Marsi,” and “Isreal Mizrahi.”

One notable alias, “Thomas Hagan,” practically invites further investigation, as a character of the same name was the consigliere and lawyer for the fictional Corleone crime family, memorably played by Robert Duvall in The Godfather.

“Practicing law without a license is illegal in California, unfair to the unsuspecting client and can cause irreparable harm to the client’s case,” District Attorney George Gascón said in the press release.

Dean’s arraignment was scheduled for Monday but got pushed to Tuesday, the DA’s office told Law&Crime.

You can read the criminal complaint against Deans, below.