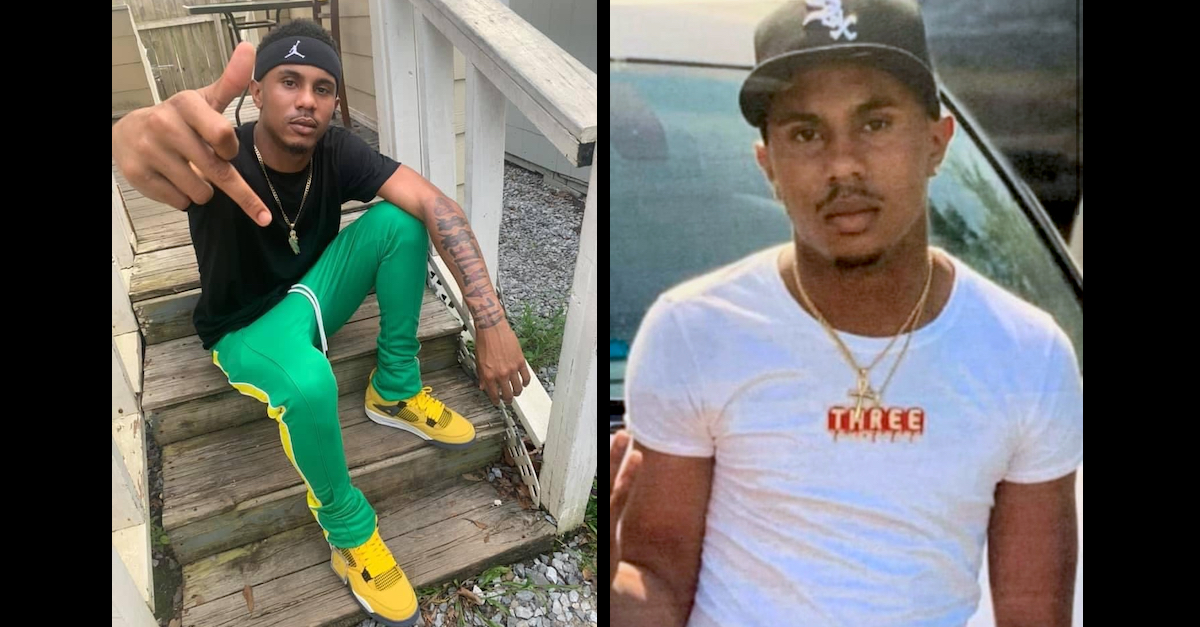 A double murder “suspect” who was wounded in a shooting is at large after escaping from a hospital bathroom.  That’s according to the sheriff’s department in Jackson County, Mississippi.

Aceon Ja’shun Hopkins, 20, is suspected of two murders by the Meridian Police Department, the sheriff’s department wrote on Facebook.  However, the precise nature of Hopkins’ connection to the killings is apparently up in the air.  Citing the Meridian Police Department itself, several local television stations are reporting that Hopkins was only wanted for “questioning” in connection with the killings.

“Hopkins told a deputy Friday morning he had to use the restroom and somehow escaped,” Sheriff Mike Ezell‘s office said on Facebook.  “Surveillance video from a nearby hotel in Pascagoula shows Hopkins changing out of his hospital gown into a black hoodie with a fleur de lis blanket wrapped around his waist. The sheriff says he got the clothes from an unlocked car in the hotel parking lot.”

“There will be an internal investigation how Hopkins escaped,” the sheriff added online.

Ezell subsequently told WLOX  Biloxi, Miss. ABC and CBS affiliate WLOX that Hopkins was hobbling because he was shackled when he managed to escape.

The surveillance video, which was obtained by WLOX, purports to show Hopkins carefully walking along a hotel sidewalk. 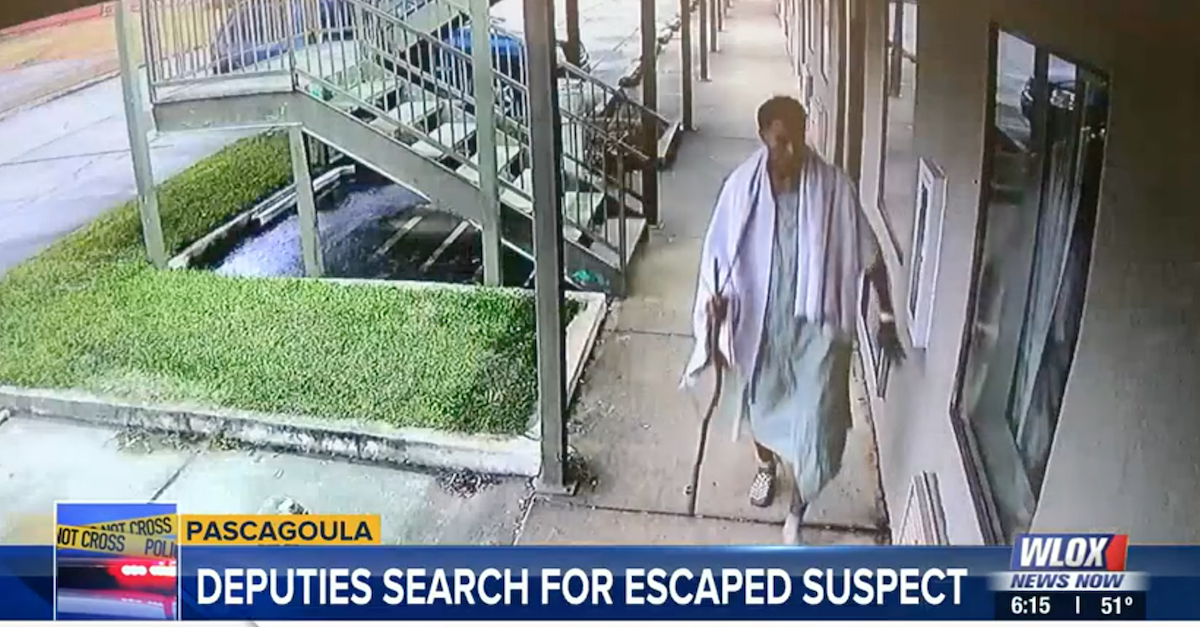 Another clip shows him furtively changing his clothes near the car he’s said to have pilfered without any apparent permission. 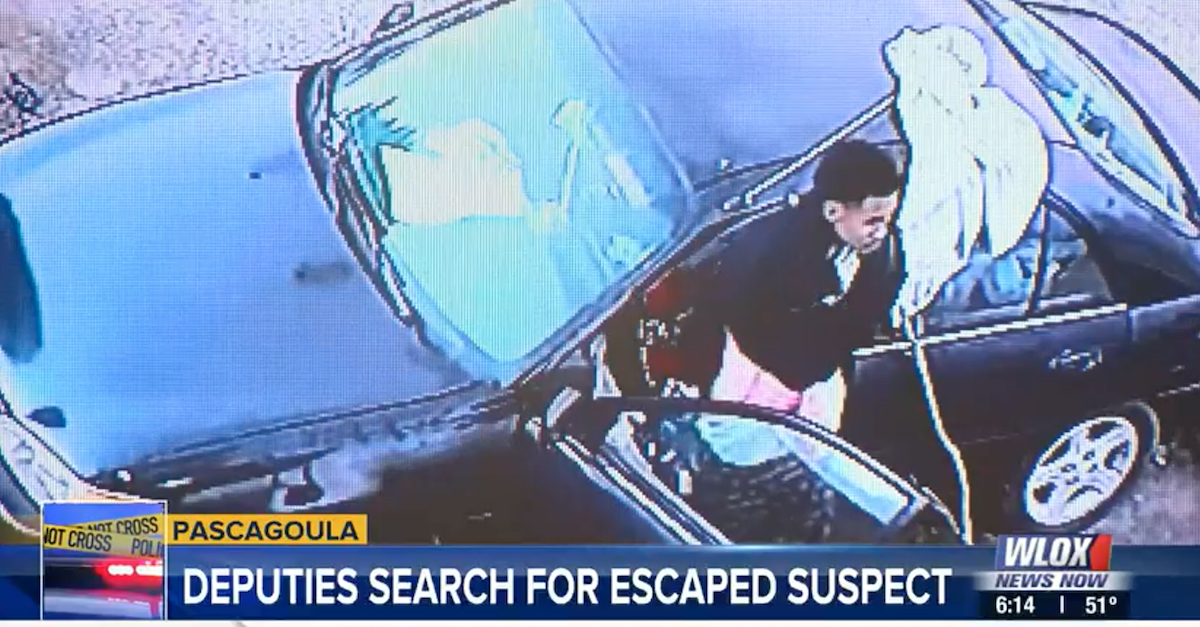 Finally, the video allegedly shows Hopkins feebly and slowly moving away from the scene with what appears to be a walking stick supporting his movements. 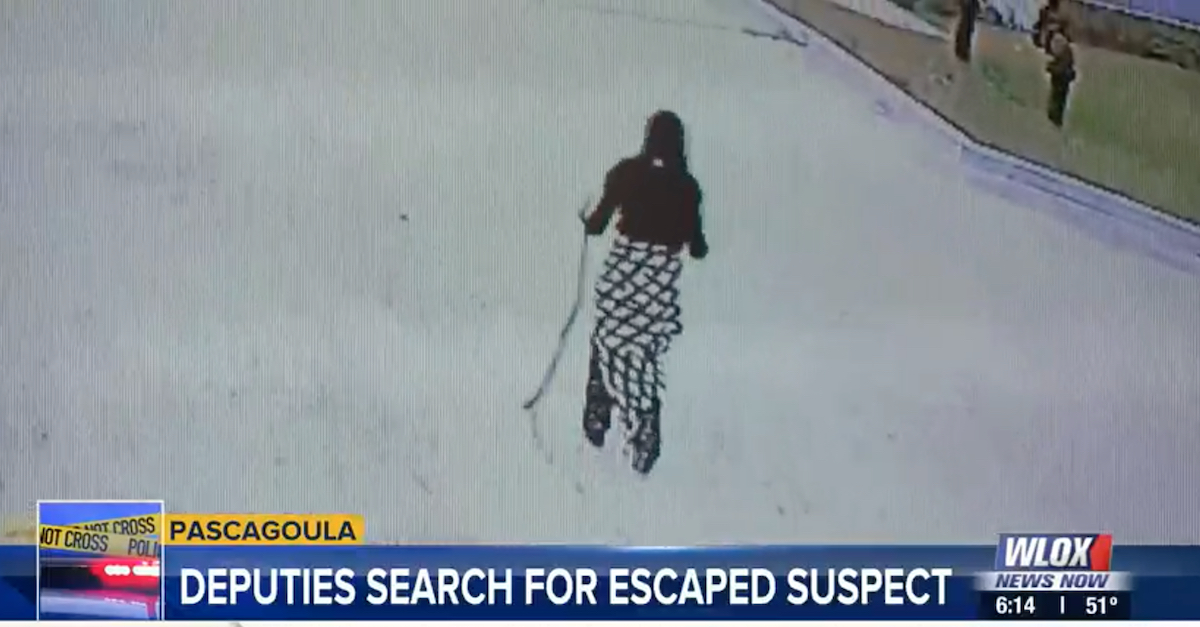 Hopkins was shot two weeks ago in the City of Moss Point, the sheriff’s department said, and was treated for his injuries at the Singing River Hospital in Pascagoula.  Moss Point Police Chief Brandon Ashley told WLOX that Hopkins “has not yet been charged with anything” in his jurisdiction.  The shooting there “is still under investigation,” the television station reported; the county sheriff’s department also said that the circumstances surrounding the shooting of Hopkins himself remain under investigation by the Moss Point Police Department.

Regardless, Hopkins is also the subject of 13 other warrants, according to the county sheriff.  Some of those warrants are for drug charges in Gulfport, the sheriff said. 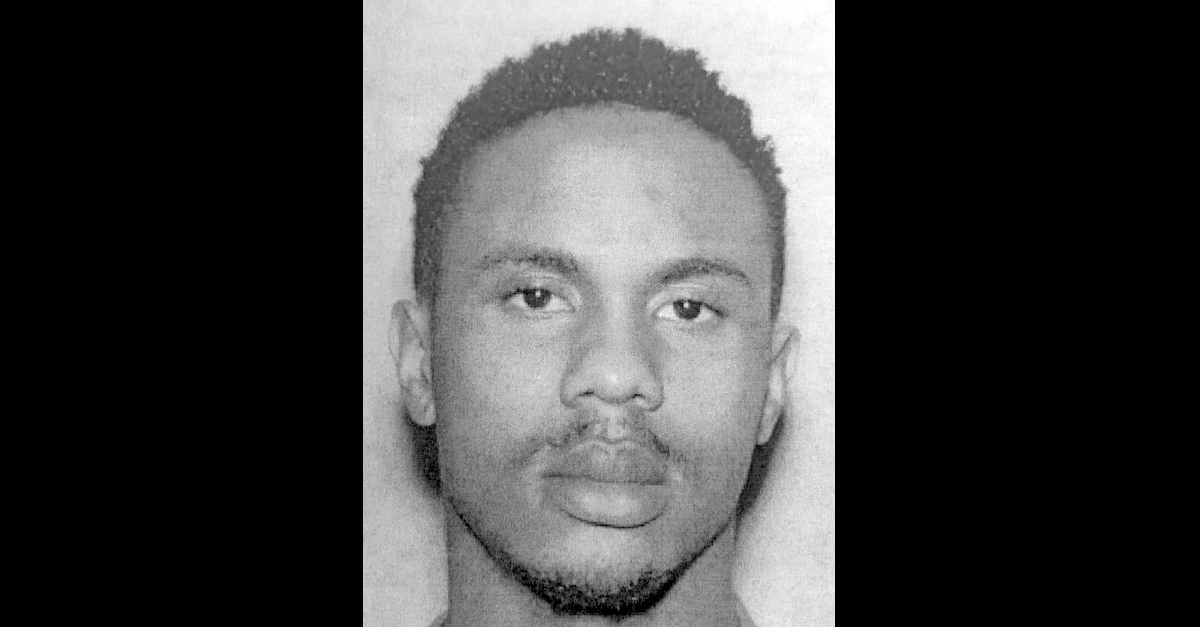 Meridian, Miss. ABC affiliate WTOK-TV reported in February that Hopkins was at one point wanted for a New Year’s Eve shooting at the Uptown Meridian Mall; however, WLOX noted that it was unclear whether Hopkins was ever actually arrested on a warrant issued in connection with that case.

“We don’t what happened,” Ezell said of the escape while speaking to the Biloxi, Miss. Sun Herald. “But I’m the sheriff, so ultimately it’s my responsibility.”

[Photos via the Jackson County, Miss. Sheriff’s Department and via WLOX-TV screengrabs.]