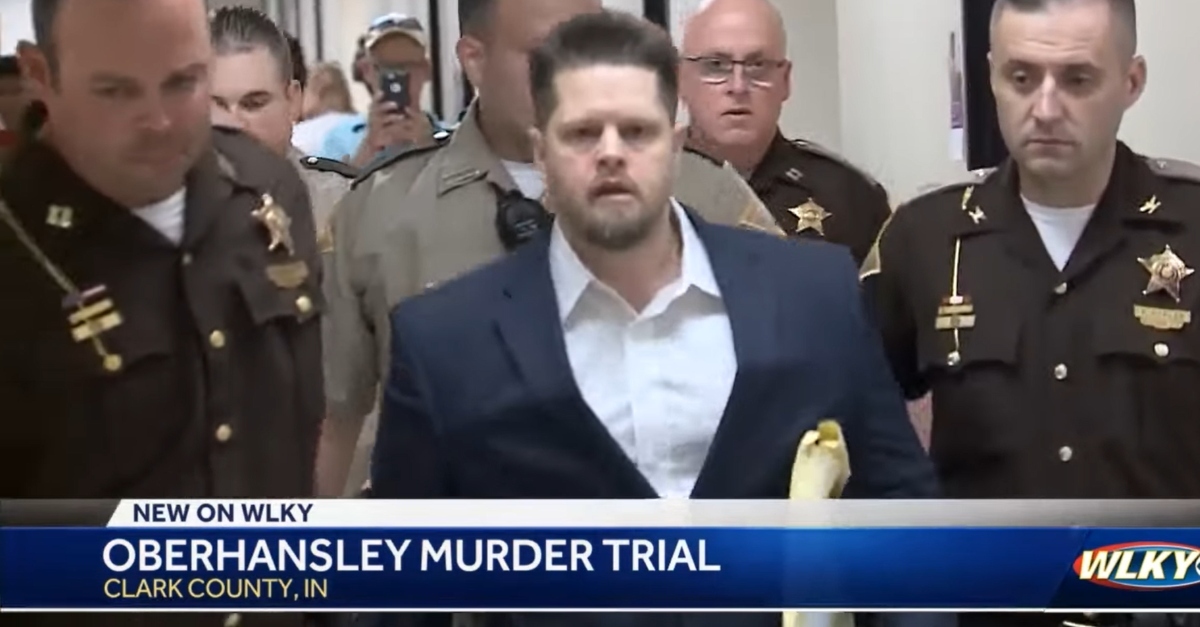 Indiana man Joseph Oberhansley, 39, was found guilty on Friday in the horrific murder of his ex-girlfriend Tammy Jo Blanton, 46. Jurors convicted him of murder and burglary, but acquitted him of rape, according to WTHR.

Authorities said that he raped the victim, killed her, and ate parts of her body.

As Oberhansley walked out of the courthouse he said he was disappointed in the outcome of his trial, and said he did not kill Tammy Jo Blanton. @WDRBNews pic.twitter.com/w7jFmAHoTC

Blanton’s body was found in her bathtub on Sept. 11, 2014. Oberhansley was caught, as investigators said they found a knife on him covered in what seemed to be hair and blood.

“He needed to be in control and when Tammy said he’s not anymore, he murdered her.”

Nonetheless, a trial was pushed back for years, as the defendant’s mental competency was repeatedly called into question. He would even accuse his attorneys of trying to control his thoughts.

Friction continued with the legal strategy. The lawyers wanted to put up an insanity defense, but Oberhansley filed a motion to withdraw it. He denied living with a mental illness. Nonetheless, attorneys managed to get a deal from the state: they would not seek an insanity defense if the state declined to seek the death penalty.

He says the evidence does not prove without a reasonable doubt that Oberhansley is guilty of the charges. It only proves “he went there (Blanton’s house) to talk.”

At trial, Oberhansley took the stand. He claimed he discovered two Black men he did not know in Blanton’s home on the day of the murder. They knocked him out, he said. He asserted that he was coerced into giving a confession to investigators. During cross-examination, Clark County Prosecutor Jeremy Mull cast skepticism on this story, asking why the two unknown men would stab the victim dozens of times but merely hurt the defendant.

Evidence presented at trial showed that Blanton previously told a co-worker that Oberhansley held her captive and raped her. She left the relationship.

Oberhansley was the only witness for the defense. He interrupted the state’s closing argument.

Mull also poked holes in Oberhansley’s theory that two men broke into Blanton’s home and stabbed her. That’s when the 36-year-old continued to interrupt Mull and the judge had to intervene.

We’ll hear from the defense after a short recess.

“Tammy was extremely independent, a very strong person,” a friend of Blanton’s told WDRB in a 2019 report. “She really had her life together. It’s really painful, so sad.”

Sentencing is set to begin Monday. This was the second trial in the case. The first ended in a mistrial after a witness mentioned Oberhansley’s criminal history and drug use. The defendant previously spent 12 years in a Utah prison for manslaughter because in a 1998 incident, he shot and killed his then-girlfriend Sabrina Elder, and shot his mother (who later forgave him). His sister grabbed his and Elder’s infant son. Oberhansley fired at them, but missed. Then he shot himself in the head, the bullet lodging in his frontal lobe. He pleaded guilty down from a murder charge. His family was reluctant to take the stand, prosecutors said.