Jury Acquits on Some Charges, Deadlocks on Others Against Three White Cops Accused of Severely Beating Black Undercover Detective 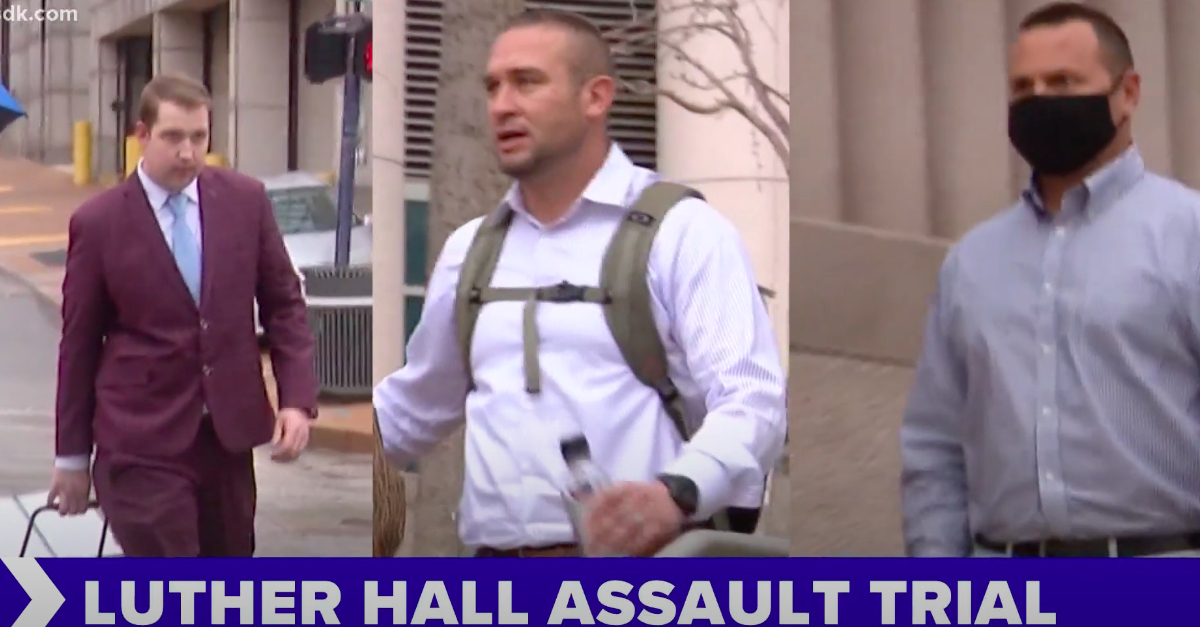 A federal jury in Missouri on Monday mostly acquitted three white St. Louis police officers accused of brutally beating a Black detective who was working undercover during a protest in 2017. The detective required a series of subsequent surgeries, several local news outlets reported. Jurors were deadlocked on two other charges.

The jury found St. Louis Police officer Steven Korte not guilty on all counts stemming from the attack on Detective Luther Hall, though jurors failed to reach a verdict on a civil rights charge against former officer Dustin Boone or on a destruction of evidence charge against former officer Chris Myers. A mistrial was declared in regards to the charges without verdicts, meaning prosecutors may choose to pursue those counts again at a subsequent trial.

All three of the men faced charges that they violated Hall’s civil rights “under the color of law” and otherwise aided and abetting in the commission of a crime.

According to the reports, large numbers of angry demonstrators descended on downtown St. Louis in Sept. 2017 after a judge acquitted former St. Louis police officer Jason Stockley, who is white, of first-degree murder charges in connection with the 2011 shooting death of Anthony Lamar Smith, who was Black.

Hall and his partner were embedded amongst the demonstrators and tasked with documenting any criminal activity that may be taking place on Sept. 17. The pair split up. Soon thereafter, several uniformed officers came across Hall, mistook him for a protester, and allegedly assaulted him. Following the brutal encounter, Hall required “spinal fusion surgery in his neck” and was left with a “pinkie-sized hole” in his lip, according to KTVI. The Associated Press reported that Hall’s injuries left him unable to consume solid foods for multiple weeks — causing him to lose 20 pounds.

Two other former St. Louis police officers — Randy Hays and Bailey Colletta — pleaded guilty to assaulting Hall and are scheduled to appear before a judge for sentencing.

Local NBC affiliate KSDK reported that Hall was in the courtroom, but left right after the jury verdict was read. According to the report, Hall’s friends said the officer was “devastated.”

St. Louis Police Chief John Hayden said the department would now begin an internal investigation into the incident that had previously been delayed at the request of federal authorities.

Although Hall was wearing a concealed body camera during the attack, the camera was violently jostled and the footage is difficult to decipher. Defense attorneys argued that, based on the video, it was impossible to identify exactly who was attacking Hall, per an AP report.

Detective Hall filed a lawsuit against the City of St. Louis that resulted in a settlement last month for $5 million.