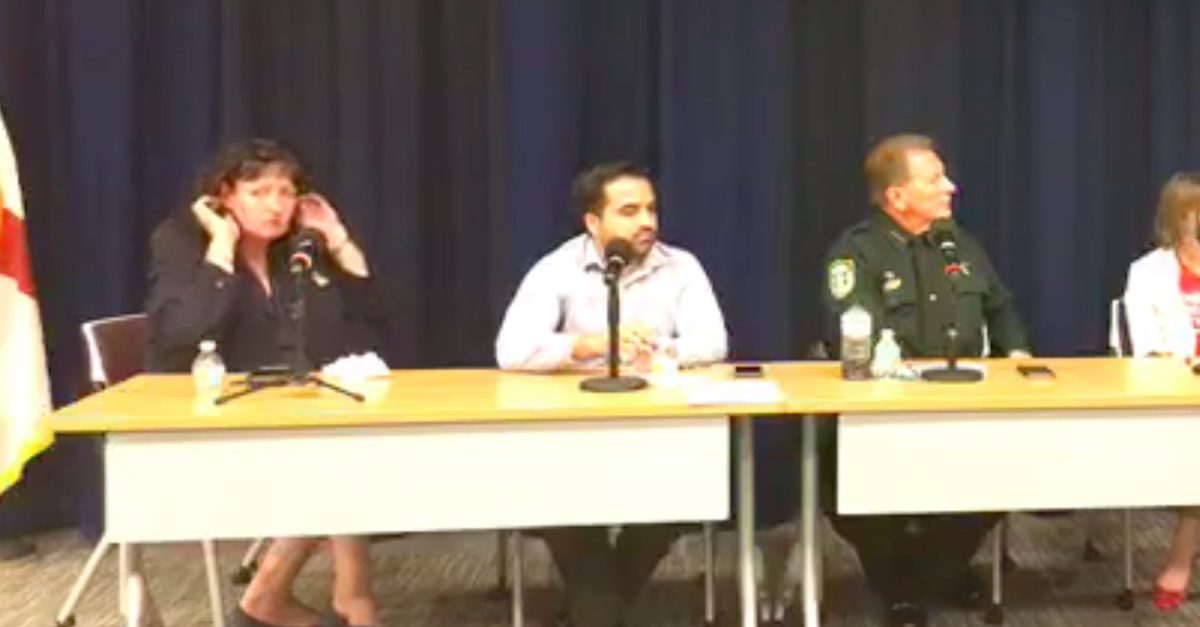 A woman running for Florida’s House of Representatives has come under fire recently as discrepancies in her heroic backstory as a doctor appear to be piling up.

Elizabeth McCarthy, a 50-year-old openly LGTBQ Democratic candidate for Florida’s House District 28, is facing severe backlash following accusations that she lied about being a doctor. McCarthy has said publicly that she treated numerous victims of the 2016 Pulse Nightclub mass shooting.

After being introduced by U.S. Rep. Darren Soto (D) at a June 2017 town hall on gun violence as an “ER doctor who treated some of the Pulse victims,” McCarthy told the crowd that she began her career as a nurse before going to the University of Central Florida and receiving her medical degree in 2014.

McCarthy recounted that on the night of the Pulse shooting, she was “working at Orlando Health,” the hospital where victims of the shooting were taken for treatment.

“That night of Pulse, I personally removed 77 bullets from 32 people,” she told the audience. “We are never prepared for it. To experience something like this, but we’re trained to go into automatic mode, to know what to do.”

Scott Powers of Florida Politics, however, reported on June 15 that: Orlando Health had no record of McCarthy every being employed by the hospital; the Florida Department of Health did not have any records of McCarthy ever being a licensed doctor; the University of Central Florida Medical School did not have any records of McCarthy attending or receiving her medical degree. Florida State, where McCarthy claimed to have received her bachelor’s degree, also said it had no record of her ever attending the school.

“It hurts me; it really does. First of all, why would I make something like this up?” McCarthy said. “I was an RN for 25 years. I’ve been in the medical field all my life.”

The state Department of Health was able to verify that McCarthy was a registered nurse until her license expired in 2005.

McCarthy responded to the story by telling Florida Politics that she planned to suspend her campaign, but the next day posted a message on Facebook in which she called Powers’ reporting a smear campaign. She claimed that she simply wasn’t ready for the attack.

In her post, the privacy settings for which have been changed, McCarthy said that she planned to pursue legal action against Florida Politics for the story, writing, “I will be seeking an attorney, for a Cease and Desist Order and ask for a Retraction on the latest accusations against me.”

“I did think about shutting down my campaign after this attack I was not ready for. I am not going to do that,” her post about this said. “I have a passion for legislation, apparently not up to snuff on campaigning but I am learning. I am MOVING FORWARD.”

Prior to making that statement McCarthy notably insisted “Yes, I am a doctor,” “Yes, I do work for Nielsen” and “Yes, I did work the night of Pulse.”

My Story :
First and Foremost, I want to say THANK YOU to ALL out that that have been sending supportive messages .
2nd, I want to say I am truly sorry this happened while at a press conference , and should have never happened there . So my sincere apologies, to that person . It was not about me. This was your time to shine .
I am and always will be as transparent as possible . So right about now I am assuming you have read the campaign smearing that happened on Friday. Yes I know where it came from and who wrote it.
I will never call that business out or that person ,s out . Nor will I smear my opponents name or the other parties name. Its not about a competition , it is for the best of the district and who the people choose .
So lets back up a little . I am from Virginia, yes I, am 50 and I moved to Florida with my mother in the mid 80’s. Prior to that I went to private school Monfort Academy. Upon moving to Fla to live with my mom and her mother due to a divorce . Yes I have siblings . I went to Moore Mickins Middle School then to Pasco Middle School and Pasco Comprehensive High School . I was a nerd didn’t have many friends. read a lot and was teased as a teen for being tall . I tried basketball , to see if I was any good . So yes I played basketball , from middle school and on . and Yes I had 2 scholarships and had to take a year off between the 2 colleges . My first degree was in criminology ,after school. I shattered my left knee and knew that would end my career in law enforcement, so while healing took about 2 years I went back to school for nursing . LOVED IT . Fast forward I found a passion for medicine . In 2006 I was diagnosed with stage 3 ovarian cancer . I had chemo and radiation from a 12.7 tumor on my ovary and while I was going thu something medical I could not work in the medical field . it was to much
So I went to work at Disney as a life guard and very good friends with Goofy . For about 2 years seasonally .I always wanted to know what they did well .
I started a non for profit 501C3 called (C.A.R.E. For Women Foundation) which raised money for women who could not afford pelvic exams .also a company called MEDCRX Medical Concierge for medical billing and electronic portal services . Both were sold . C.A.R.E. was not listed in the article , so I wanted to keep everything in perspective . I did work for a media research company as well .
At this time I had medical school bills and a house to pay for. I am a single gay women with no double income to support me . so I worked 2 jobs . No shame
I found a passion , for legislation I joined the caucus and was very fortunate to find a home to learn about legislation and the mentors , that gave the directions to learn .within the Democratic Party LOVED IT . Remember I said I was a nerd. I learned to write bills and network and understand what it was all about . I never thought I was cut out to run for a seat , bit was told many times over .
So in Sept 2018 I bought a house in Seminole County , a 4/3 , so when my mother needs a place to come to later in life she will never have to go to a nursing home , While getting my affairs in order. I decided to take leap of faith. In March I filled for House District 28 .
My campaign mission is to work on Education Healthcare , Environmental and Union. I know I need to build my networks along the way ,since I am new to the area and I will .
I did think about shutting down my campaign after this attack I was not ready for it . I am not going to do that . I have a passion for legislation, apparently not up to snuff on campaigning but I am learning . I am MOVING FORWARD .
With all that is said , I will make a promise to you . If you wish for me to return your donation to my campaign I will do that with no question .
I do not play dirty politics and never will .
If I win wonderful , I will serve my district to the best of my ability and will be asking a lot of questions along the way . I will have a open door policy for my district for the community to come and speak to me . I will not tolerate hate or discrimination. If I don’t win thats ok too,,, I tried
I will be seeking a attorney, for a Cease and Desist and ask for Redaction on the latest accusations against me .
With Much Respect
Elizabeth McCarthy

Watermark Online, a website dedicated to “communicat[ing] and advanc[ing] LGBT interests,” said it reached out to McCarthy as well. She declined to clear things up:

Watermark reached out to McCarthy to clear up the questions about her history with Orlando Health. McCarthy replied with an email, stating “No thank you, appreciate you asking.”

McCarthy is being asked to withdraw from the race. She said she would make a statement in the next couple of days.