Plenty to sort through from Marconi coming soon, but first:

Today on E Passyunk, a man was ripping down #blacklivesmatter signs made by local children outside a community center.

Filmed here, someone yells “Black lives matter” to which this guy responds, “Not to me, they don’t” pic.twitter.com/LcD9K1207f

An official in Philadelphia is out of a job. A family court identified him as the man seen on video tearing down Black Lives Matter signs, and saying he didn’t care about black lives.

The behavior of Michael Henkel as seen on footage “is egregious and unacceptable for an employee for the court,” First Judicial District’s Family Court spokesman Martin O’Rourke said in a statement to WPVI.

Michael Henkel— man seen in now viral video ripping down #BlackLivesMatter posters and saying #BlackLives don’t matter to him— has been fired from his position as Supervisor Writ Server from the First Judicial District’s Family Court. @6abc pic.twitter.com/F1qSNIUW9T

“That’s not your property,” said a woman heard in the video.

“Oh, you pay for that,” the woman said sarcastically.

“Yeah, my taxes pay for this place, yep,” said the man identified as Henkel. “Just so you know. So I can do whatever I want.”

“Oh, you can do whatever you want,” she said.

“You’re fucking right I can,” said the man.

“All right,” said the woman.

“And I’m always around here too,” he said.

The video doesn’t end there, but that’s most relevant part of the passive aggressive back and forth.

Anyway, Henkel was identified as a supervisor for the Writ Services Unit for a family court.

So having seen roaming the streets, ripping down children’s signs, yelling about how little he cares if black people live or die, seems like.. maybe not someone fit to participate in legal processes *anywhere*, let alone in a city with a population who’s 44% black. pic.twitter.com/80zraGzmKv

The video eventually landed on the radar of officials.

per source, top officials of the city of Philadelphia are aware of this video of a court employee — https://t.co/BjBeWR9oUH

O’Rourke said that Henkel wasn’t involved in cases, but did supervise employees, according to The Philadelphia Inquirer.

The now-fired official could not be reached for comment.

And oh dear, do our eyes deceive us? Is this him in a February 2017 report from WPVI? A “Michael Henkel” from South Philadelphia (where the sign incident happened) spoke to the local ABC affiliate amid repairs of the city’s LOVE sculpture. 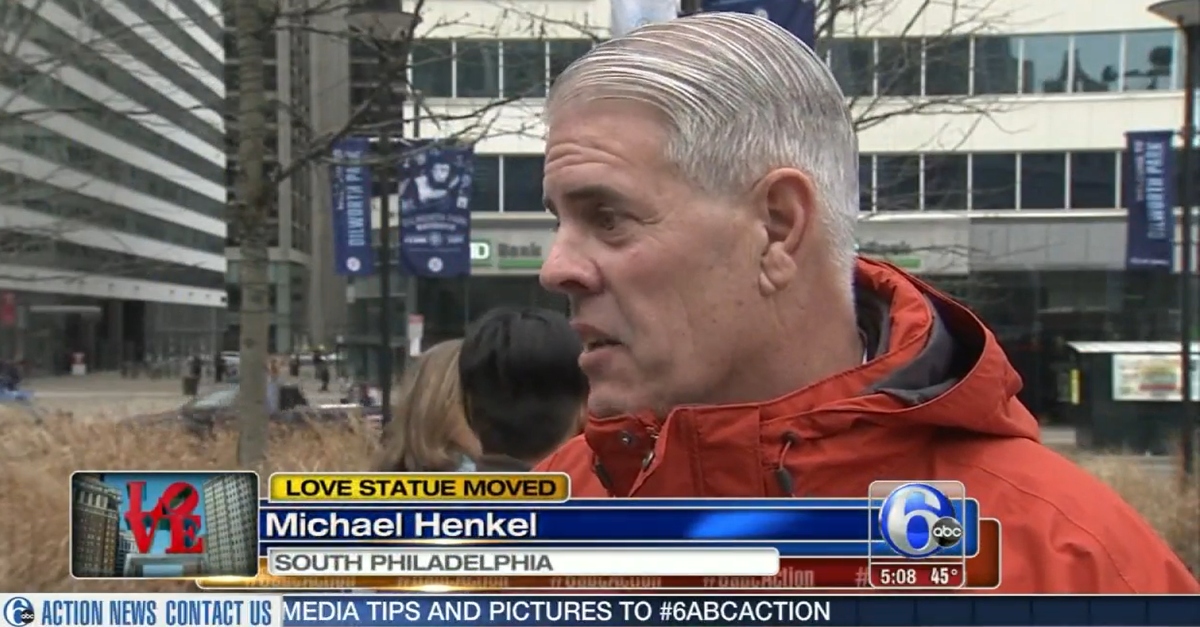 “The city and the country need more love,” he said. “Absolutely this country is so divided, and I hope soon that either God or the people see the light of day and start loving one another again, because we need it.”