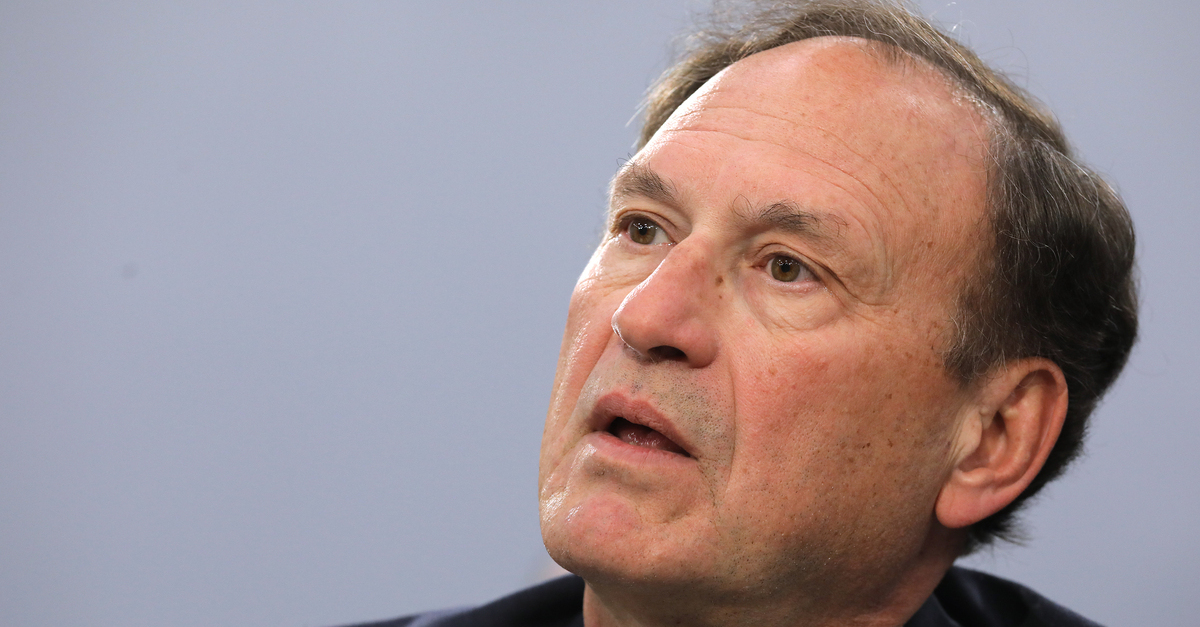 Supreme Court Justice Samuel Alito authored an exceedingly lengthy dissent in the now-settled legal debate over whether the Civil Rights Act of 1964 protects lesbian, gay, bisexual and transgender individuals. And, in the process of making a slippery-slope argument, the conservative jurist appears to have scored a major own goal.

Alito then went on to essay a few potential outcomes of the Supreme Court’s admittedly “far-reaching” opinion–a phrase also used by Bostock v. Clayton County, Georgia author Justice Neil Gorsuch. It was perhaps an indication that Alito’s slippery-slope argument was, in fact, acknowledged and metabolized by the majority who either found it unpersuasive or who determined that they actually could live with the logical and sweeping consequences of their decision.

The dissent called upon many hot-button legal disputes that have served as touchstones of movement conservatism in recent years in order to make its case. Such as [emphasis in original]:

“[B]athrooms, locker rooms, [and other things] of [that] kind.” The Court may wish to avoid this subject, but it is a matter of concern to many people who are reticent about disrobing or using toilet facilities in the presence of individuals whom they regard as members of the opposite sex. …

Other cited-as-controversial implications of Monday’s opinion cited by Alito include Title IX provisions which prohibit “sex discrimination by any elementary or secondary school and any college or university that receives federal financial assistance,” Title IX as it related to women’s sports, professional sports, housing, employment by religious organizations, healthcare, speech issues and the way constitutional claims are handled in the future.

To be clear: many of Alito’s concerns are obvious implications of the landmark ruling while others are less than clear–such as his suggestion that freedom of speech may somehow be impacted by the impact of the court’s opinion on preferred pronoun usage.

While casting a wide net as to those potential implications, the dissent also asserted that it was just asking questions; Alito took issue with the majority opinion characterizing those concerns as negative.

“Contrary to the implication in the Court’s opinion, I do not label these potential consequences ‘undesirable,'” Alito said. “I mention them only as possible implications of the Court’s reasoning.”

Alito’s major issue with the ruling appeared to be keyed directly toward how Gorsuch framed his own legal analysis.

“The Court attempts to pass off its decision as the inevitable product of the textualist school of statutory interpretation championed by our late colleague Justice [Antonin] Scalia, but no one should be fooled,” the dissent said. “The Court’s opinion is like a pirate ship. It sails under a textualist flag, but what it actually represents is a theory of statutory interpretation that Justice Scalia excoriated––the theory that courts should ‘update’ old statutes so that they better reflect the current values of society.”

Alito’s “pirate ship” line quickly invited a cargo hold’s worth of criticism, but it also helped with an extended metaphor when coupled with one of several appendices attached to the lengthy dissent (which apparently resulted in such an uncharacteristically massive file size for Supreme Court PDFs that initially appeared to be unreadable, corrupted and/or plagued by extremely slow download speeds).

To wit: the 107-page-long dissent also helpfully contained a list of some 100-plus statutes in Appendix C (the sprawling minority position is over three times as long as the majority opinion itself) and those statutes are basically a cheat sheet which statutes advocates are likely to mount challenges against next.

In other words, Alito may have handed Civil Rights attorneys a blueprint on how to extract a series of sweeping victories directly based on the logical application of Monday’s opinion. It seems that the dissent could be more akin to a trove of buried treasure that will keep anti-discrimination attorneys busy for the foreseeable future. American Civil Liberties Union attorney Josh Block said as much:

Alito’s appendix listing all the statutes prohibiting sex discrimination that will affected by Bostock reminds me of RBG’s story about Solicitor General Griswold’s unintentionally helpful cert petition in Moritz pic.twitter.com/MDkSn3tNcA

“I have lots of notices of supplemental authority to write today!” he added in another tweet.