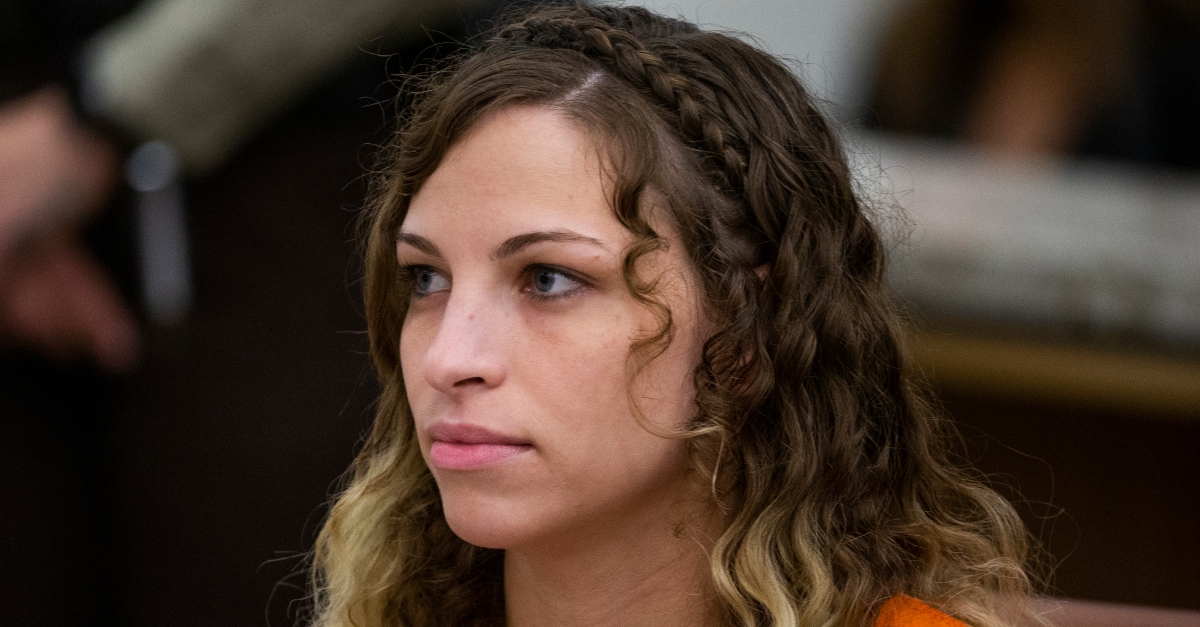 One of America’s most notorious sexual predators has filed from divorce from her husband of four years.

Brittany Zamora was arrested a little over two years ago after her semi-public sexual relationship with a 13-year-old boy–who also happened to be her student–garnered the attention of the boy’s parents and, eventually, local law enforcement in Goodyear, Arizona.

Now, less than one year into her 20-year sentence for sexual misconduct with a minor, Brittany and Daniel Zamora are dissolving their marriage citing no “hope of reconciliation” between the two because their relationship is “broken beyond repair.”

For any unfamiliar with untying the marital bonds, the above-noted phrases are pro forma pieces of divorce law boilerplate and not the petitioner’s own words. In this instance, Zamora simply checked the relevant boxes on the form she filed late last month.

According to local NBC affiliate KPNX, Zamora is not changing her name and plans to relinquish her share in the marital home and all of her community property to her husband. He has yet to respond to the divorce filing, according to the local docket.

The 28-year-old former teacher was arrested in March 2018 after Las Brisas Academy Elementary School Principal Tim Dickey went to the police–well after he already suspected something was more than amiss with Zamora and the victimized child in question.

Over a month before Zamora was arrested, students voiced their concerns about the sexual liaisons to Dickey. An investigation, however, only resulted in the principal confirming that Zamora quite likely favored her student–the specific concerns were dismissed.

“There were some rumors,” Liberty Elementary School District Superintendent Richard Rundhaug said at the time. “He looked into those rumors but he felt like in the long run, this was information that you might typically hear from sixth graders.”

But the rumors in this instance were actually true.

The boy’s parents quickly noticed a change in their son–a nascent and apparently uncharacteristic need for privacy led his parents to install a piece of spy software on his smartphone. The software eventually tagged two text messages containing the word “baby.” When asked who sent the messages, the boy replied: “My teacher.”

In time, public reporting revealed the lurid details of their relationship and several additional texts documented their feelings as well.

“OMG, I love you,” Zamora texted the boy in one message.

“Omg lol you’re so cute baby,” she said in another. “I wish you could’ve stayed after with me.”

“I want you every day without limit,” Zamora wrote in another series of texts. “If I could quit my job and fuck you all day long, I would.”

Police said their relationship resulted in at least four sexual encounters between the two over the course of February and March 2018. Two of those instances were said to have occurred in Zamora’s car after the teenager sneaked out of his grandparents’ house because Zamora asked him to do so. Another instance even occurred in Zamora’s classroom after a school talent show.

Faced with overwhelming evidence and the prospect of spending most of the rest of her life in prison, Zamora pleaded guilty in June 2019 to molestation of a child, sexual misconduct with a minor, and public sexual indecency.

She was sentenced the following month after a sentencing hearing in which she tried to cast herself as something of a model teacher and citizen who experienced a momentary lapse in judgment:

I started programs while teaching to help stop bullying, teach girls about nutrition [and] fitness, create fundraisers to help with autism, and help families in need. I filled 25-plus desks with school supplies each year, and even won Teacher of the Year in 2016. As far as a citizen goes, I’ve lived my life respecting and trying to obey every law.

As for Zamora’s soon-to-be ex-husband, there was a time when he tried to convince the student’s parents not to call the police.