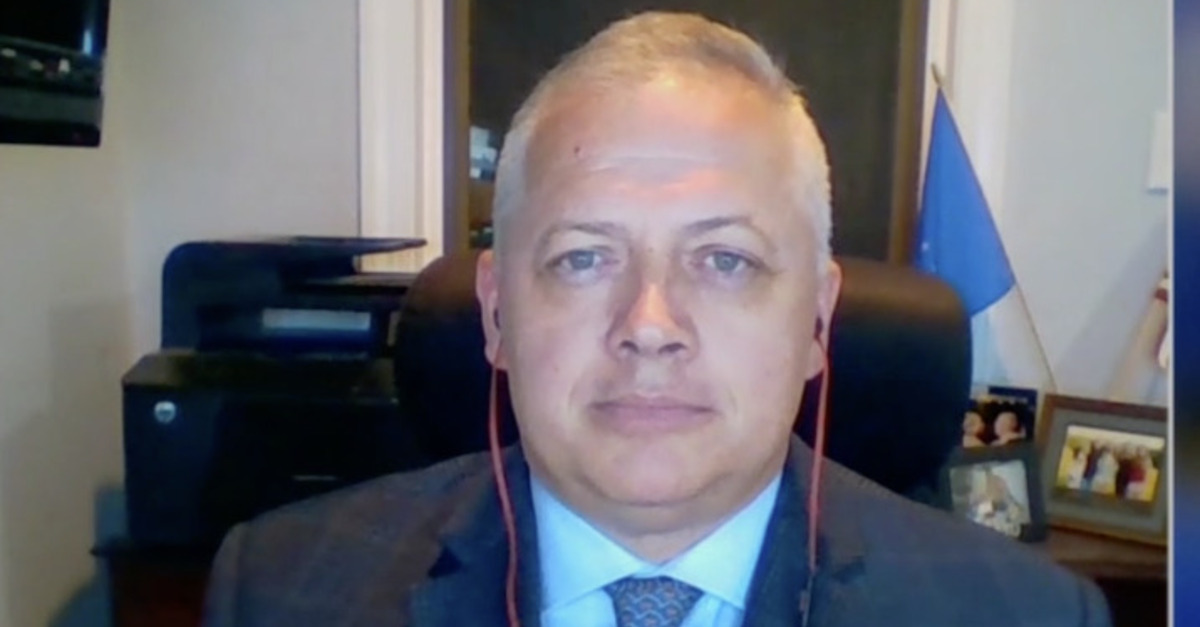 The Appomattox County Republican Committee of Virginia officially slapped the wrist of a representative from Virginia’s 5th congressional district on Saturday. The committee unanimously passed a resolution censuring Rep. Denver Riggleman (R-VA), declaring that Riggleman “betray[ed] the very morals, principals, and values of the Republican Party,” by, among other things, officiating a same-sex wedding.

Here is the Appomattox County Republican Committee saying they unanimously censured @RepRiggleman because he betrayed their values when he officiated a same sex wedding pic.twitter.com/0YOea3aVMU

The wedding mentioned occurred in July 2019, and was between two men who were former campaign staffers for Riggleman. At the time, Riggleman commented in an interview, “My real belief is that government shouldn’t be involved in marriage at all, but if it is, everybody has to be treated equally before the law.”

“And that is part of our Republican creed. And it also comes down to love is love. I’m happy to join two people together who obviously love each other,” he continued.

Despite Riggleman’s personal support for a same-sex wedding, he voted against the Equality Act—a law that would  ban discrimination based on sexual orientation and gender identity. Still, Republicans took aim at Riggleman’s participation in the wedding, placing it at the top of their list of grievances. They tried and failed to censure Riggleman for this before. The second time worked.

The lengthy resolution began by stating, “Whereas, in July 2019, Denver Riggleman officiated a same sex wedding which in turn goes against the values and principles of the Republican Party betraying and disregarding the concerns for the many Conservative and Christian voters in the 5th district who elected Denver Riggleman to the United States House of Representatives.” It continued to state that in October, Riggleman appeared on CNN and “made claims that he would consider voting for former Vice President Joe Biden for President of the United States,” and continued to say that President Donald Trump had been “irresponsible and dangerous” for his “refusal to denounce QAnon.”

The resolution also noted Riggleman’s failure to act partisan enough. “Riggleman repeatedly used the President’s endorsement to persuade voters to vote for him,” it read, “only in the coming months to harshly criticize and condemn the President, calling the claims of voter fraud as false and for him to concede the Presidential election to former Vice President Joe Biden.”

Riggleman appeared unfazed by the lengthy censure, tweeting that the Virginia GOP “finally admits they rig a convention because of the wedding,” and declaring, “I believe in marriage equality and I despise conspiracy theories.” Riggleman put a humorous spin on the incident, adding, “I was also censured by the #Kraken because I thought it was #calamari.”

Glad the @VA_GOP finally admits they rig a convention because of the wedding. We already knew this, but here's your sign

I believe in marriage equality and I despise conspiracy theories.

I was also censured by the #Kraken because I thought it was #calamari https://t.co/pnyRvB2Czc

Riggleman’s replacement in Congress, Republican Bob Good, appeared at a Trump rally Saturday, officially announcing himself to be in line with 2020 Republican orthodoxy.

“This looks like a group of people that gets it,” Good said, “This is a phony pandemic.”

Holy shit. Congressman-elect Bob Good of Virginia starts speaking and immediately proclaims, “this looks like a group of people that gets it. This is a phony pandemic.” pic.twitter.com/xre4DWslGW

Riggleman himself responded, sharing his own family’s personal experience with COVID-19, and calling Good’s messaging “fake,” as well as, “irresponsible, embarrassing and everything that is wrong with politics.”

My grandmother is in the Hospital with #COVID

Saying #COVID is fake is irresponsible, embarrassing and everything that is wrong with politics. Virginia deserves better. #VA05 https://t.co/lwsmsU0HGv

The censure of Riggleman came just days before the Supreme Court of the United States declined an opportunity to roll back marriage equality.