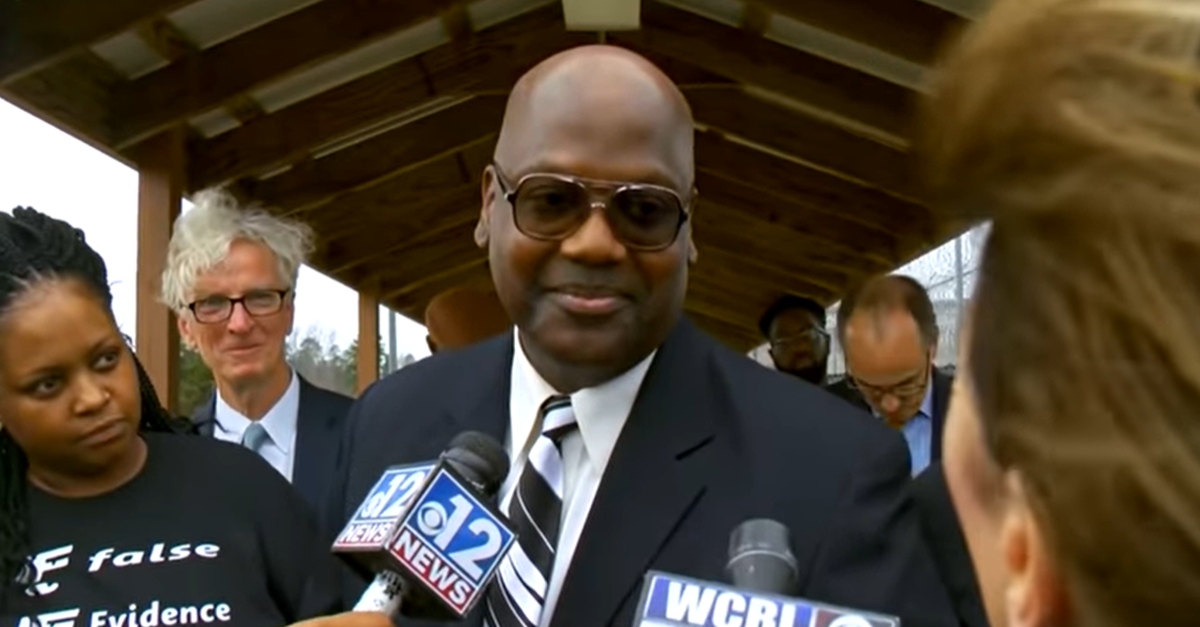 Curtis Flowers after he was released on bail in December 2019.

At age 50, Mississippi man Curtis Giovanni Flowers has spent almost as much time in prison as he has out of it. Now a judge on Friday dismissed the case that put this defendant behind bars for 23 years, and had him tried six (almost seven) times.

“Today, I am finally free from the injustice that left me locked in a box for nearly 23 years,” he said in a statement, according to UPI. “I’ve been asked if I ever thought this day would come. I have been blessed with a family that never gave up on me and with them by my side, I knew it would.”

Flowers was long eyed in the 1996 murders of Tardy Furniture owner Bertha Tardy, and employees Robert Golden, Carmen Rigby, and Derrick “Bobo” Stewart. He had been fired from the business two weeks before the bodies were found at the store in Winona, Mississippi on July 16 of that year, police said.

The state’s case were long troubled: two of his six trials ended in hung juries, and the remaining four were overturned over prosecutorial misconduct. District Attorney Doug Evans, the prosecutor who tried Flowers each of the six times, recused himself ahead of the then-possible seventh trial.

Race indelibly marked the proceedings. The defendant is African-American, and Evans was found to have dismissed a disproportionate amount of potential Black jurors, and asked them way more questions on voir dire than their white counterparts. The United States Supreme Court ruled on behalf of Flowers 7-2 in 2019.

“The numbers speak loudly,” Justice Brett Kavanaugh wrote for the majority. “Over the course of the first four trials, there were 36 black prospective jurors against whom the State could have exercised a peremptory strike. The State tried to strike all 36. The State used its available peremptory strikes to attempt to strike every single black prospective juror that it could have struck.”

The majority of justices determined that Evans dismissed Black jurors on purpose.

“The State’s relentless, determined effort to rid the jury of black individuals strongly suggests that the State wanted to try Flowers before a jury with as few black jurors as possible, and ideally before an all-white jury,” Kavanaugh wrote.

Fellow conservative, Justice Clarance Thomas, who is Black, wrote a dissent in which he rejected that Evans’ actions were racism.

“I would not so blithely impute single-minded racism to others,” he wrote in a footnote. “Doing so cheapens actual cases of discrimination.”

He was emphatic, but described, from his point of view, a silver lining of the 7-2 decision.

“If the Court’s opinion today has a redeeming quality, it is this: The State is perfectly free to convict Curtis Flowers again,” he wrote in 2019.

But now the prosecution says they just don’t have any available living witnesses who haven’t contradicted themselves on the record. Others have passed away.

“As the court noted at the bail review hearing, the only witness who offered direct evidence of guilt recanted his prior testimony, admitting that he was lying when he said Mr. Flowers made a jailhouse confession to the murders,” Mississppi Attorney General Lynn Fitch wrote in a motion to dismiss the indictment. “Moreover, the Court was made aware of alternative suspects with violent criminal histories, as well as possible exculpatory evidence not previously considered.”