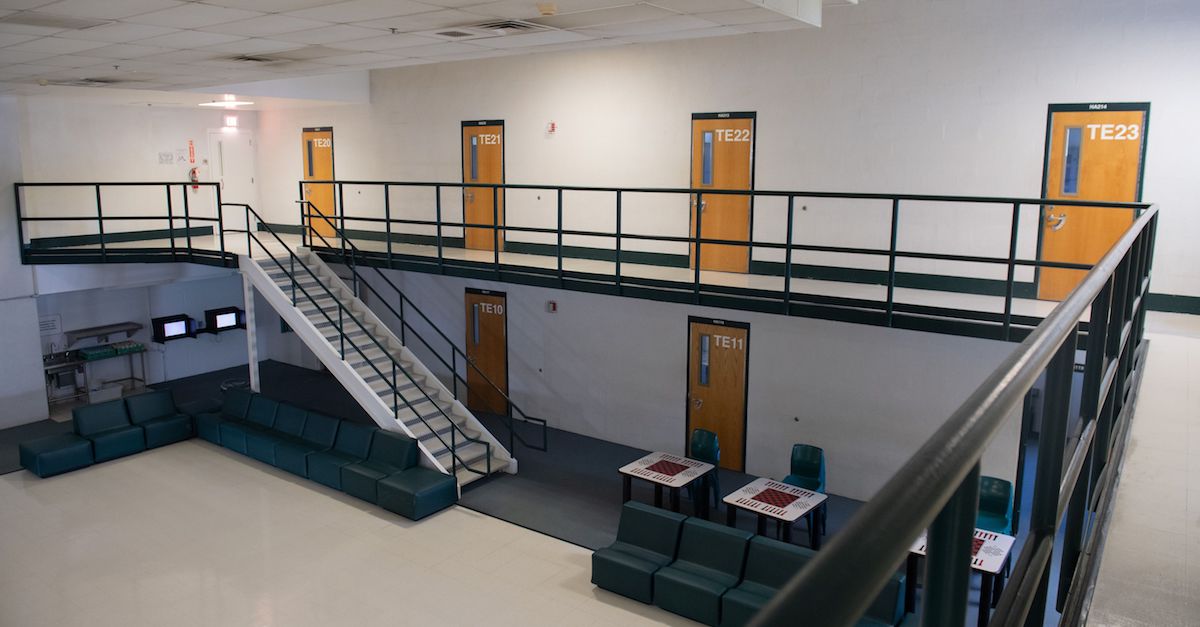 Cell room doors are seen at the Caroline Detention Facility in Bowling Green, Virginia, on August 13, 2018. – A former regional jail, the facility has been contracted by the US Department of Homeland Security Immigration and Customs Enforcement (ICE) to house undocumented adult immigrant detainees for violations of immigration laws.

The American Civil Liberties Union (ACLU) has filed a lawsuit against Immigration and Customs Enforcement (ICE) demanding the release of all currently detained undocumented immigrants who may be “at risk” of contracting and spreading the novel Coronavirus (COVID-19).

Working in conjunction with the Northwest Immigrant Rights Project (NWIRP), the specific lawsuit is keyed specifically toward the release of immigrants from the Tacoma Northwest Detention Center in Washington.

“People in congregate environments, which are places where people live, eat, and sleep in close proximity, face increased danger of contracting COVID-19, as already evidenced by the rapid spread of the virus in cruise ships and nursing homes,” the lawsuit obtained by Law&Crime notes. “People who are confined in prisons, jails, and detention centers will find it virtually impossible to engage in the necessary social distancing and hygiene required to mitigate the risk of transmission, even with the best-laid plans.”

The 21-page petition goes on to fashion itself as a general plea for public health:

For this reason, correctional public health experts have recommended the release from custody of people most vulnerable to COVID-19. Release protects the people with the greatest vulnerability to COVID-19 from transmission of the virus, and also allows for greater risk mitigation for all people held or working in a prison, jail, or detention center. Release of the most vulnerable people from custody also reduces the burden on the region’s limited health care infrastructure, as it lessens the likelihood that an overwhelming number of people will become seriously ill from COVID-19 at the same time.

The lawsuit specifically argues the nine named plaintiffs “are particularly vulnerable to serious illness or death if infected by COVID-19…who are held in civil detention by [ICE]…as they await the adjudication of their immigration cases.” The plaintiffs are over the age of 40 and most are in their 50s and 60s.

The filing goes on to note the increased stakes for those detainees—based on the testimony of various public health experts who advise the release of high-risk (for infection) individuals.

“Plaintiffs are older adults or have medical conditions that lead to high risk of serious COVID-19 infection, including lung disease, heart disease, diabetes, epilepsy, kidney disease, autoimmune disorders, asthma, and hypertension,” the lawsuit notes. “The [ICE detention center] is located in the Seattle, Washington metropolitan area, the epicenter of the largest COVID-19 outbreak in the United States, and one of the largest known outbreaks in the world. As detailed below, the danger posed by Plaintiffs’ detention during the current outbreak of COVID-19 is ‘so grave that it violates contemporary standards of decency to expose anyone unwillingly to such a risk’ and violates their constitutional right to safety in government custody.”

The lawsuit cites a landmark Supreme Court case that found “deliberate indifference” qualifies as a form of cruel and unusual punishment—an unconstitutional violation of the Eighth Amendment—even in cases of future health risk due to underlying conditions and outside factors. The claim for relief, however, relies upon a Fifth Amendment right to substantive Due Process.

“Immigrant detention centers are institutions that uniquely heighten the danger of disease transmission,” Eunice Cho, senior staff attorney at the ACLU’s National Prison Project said in a press release. “In normal circumstances, ICE has proven time and again that it is unable to protect the health and safety of detained people. These are not normal circumstances, and the heightened risk of serious harm to people in detention from COVID-19 is clear. Public health experts have warned that failing to reduce the number of people detained — and in particular, failing to release those particularly vulnerable to the disease — endangers the lives of everyone in the detention facility, including staff, and the broader community.”

“ICE has the responsibility to protect the safety of all who are in immigration detention,”NWIRP’s Legal Director Matt Adams added. “As a first step, it should immediately release our clients who have already been identified by the federal government as being most at risk because of this epidemic. If it waits to react to worst case scenarios once they take hold, it will already be too late.”

Law&Crime reached out to ICE for comment on this story. ICE spokesperson Tanya J. Roman said: “ICE does not comment on pending litigation.”

Editor’s note: this story has been amended post-publication to include a response from ICE.