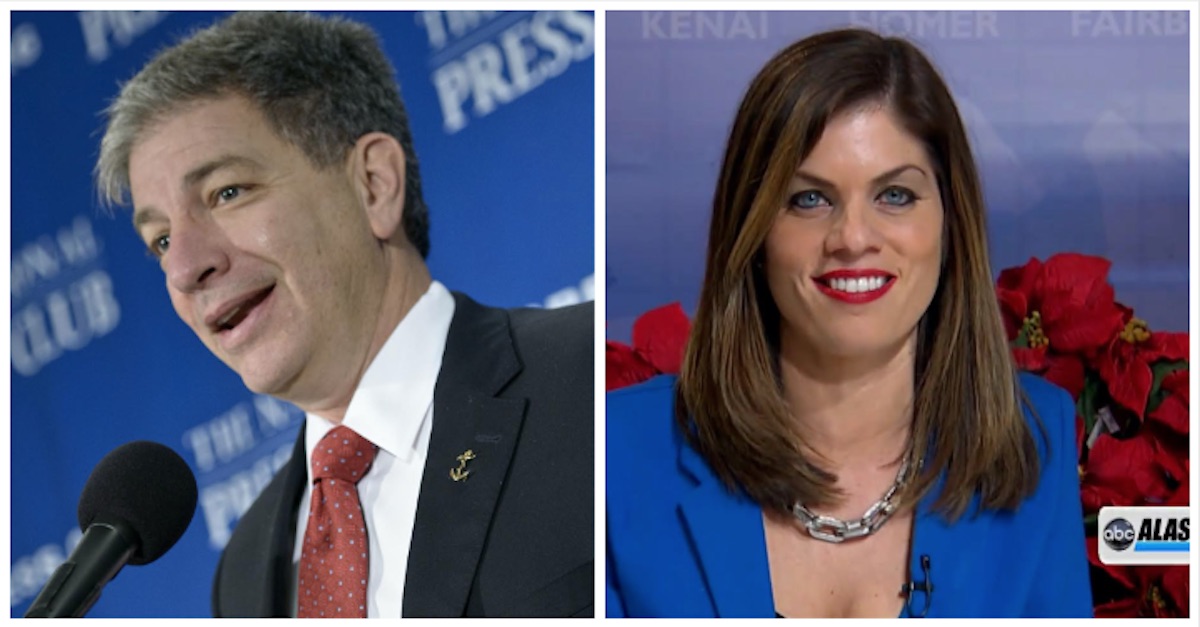 He is the mayor of Anchorage, Alaska no longer—or at least he won’t be once Friday arrives. Until then, Ethan Berkowitz (D), a married man and a father, isn’t much interested in answering the press’s questions about an “inappropriate messaging relationship” he had with a local news anchor who later threatened to kill him and his wife.

Berkowitz, 58, is opting instead to leave public office as quietly as possible after releasing a disturbing voicemail that was left for him by YourAlaskaLink anchor Maria Athens, 41. The voicemail, which contained anti-Semitic remarks and at least two death threats, featured Athens repeatedly and angrily calling Berkowitz a “motherfucker” as she claimed he was a “pedophile.” As if that makes sense.

Athens threatened to expose Berkowitz in an Oct. 9 news report saying that he had posted naked pictures of himself on an “underage girl’s website.” Anchorage Police and the FBI investigated Athens’s claim and found no evidence of criminal conduct. In addition, the story she threatened to expose on her show never aired and was discredited by her employer, the Fox/ABC station (KTBY and KYUR) in Anchorage. The station manager, a man described both as Athens’s fiancé and boyfriend, prevented the story from airing.

They had an argument and then a follow-up confrontation that caused a remarkable public spectacle, resulting in Athens’s arrest, per the Associated Press:

Athens and the station’s manager, who is described as her boyfriend in the documents, got into an argument while driving in Anchorage. He made her get out of the car and told her she was barred from returning to the station.

Athens nevertheless went back to the television studio and attacked him. When police arrived, she hit an officer trying to arrest her and was placed in full restraints after she tried to kick out the back window of the police cruiser with her high heels.

Athens was arrested and charged with assault, criminal mischief and disorderly conduct. She was released from jail after posting bond. Then she attempted to explain, at least to some degree, how she and Berkowitz had become involved.

“When he slided into my texts, he was so smooth with his little witty slogans and pictures,” she said. “He gave me attention when I was lonely.”

Berkowitz first released a voicemail that Athens left him. The Alaska Landmine published it.

Here’s what Athens said on the voicemail:

Ethan, it’s Maria Athens from Fox ABC CW Newsnet Alaska . I just learned through my, uh, Emmy award-winning journalism you’re also a pedophile and like little girls and children. And there’s a website, I’m so fucking exposing you. I’m gonna get an Emmy, so you either turn yourself in, kill yourself, or do what you need to do. I will personally kill you and Mara Kimmel my goddamn self, you Jewish piece of living fucking shit. You have met your match motherfucker. You have met your motherfucking match. I can’t believe I am such a good person and thought I loved you. I fucking hate—I don’t even hate you—I will pray for your Zionist fucking ass you piece of shit loser. And I’m putting this on the news tonight. Byeeee! Have a great Friday you motherfucker!

The mayor’s office initially referred to Athens as “hostile” and “unwell,” calling her allegations “slanderous” and “categorically false.”

On Oct. 12, Berkowitz did admit that he had an inappropriate messaging relationship with Athens that began in 2016.

“I apologize to the people of Anchorage for a major lapse in judgment I made several years ago when I had a consensual, inappropriate messaging relationship with reporter Maria Athens. I’m embarrassed and ashamed for the hurt I’ve caused my family and our community. I take responsibility for my actions,” the statement said.

The next day, he resigned effective as of Oct. 23, which is this coming Friday.

“My resignation results from unacceptable personal conduct that has compromised my ability to perform my duties with the focus and trust that is required,” Berkowitz said.

The Anchorage Daily News has inundated Berkowitz with dozens of questions since then, but the mayor appears to have no intention of saying anything more—at least right now—about this utterly bizarre scandal. At least some of those questions focused on whether Berkowitz had used city issued phones or email accounts to engage in inappropriate relationships with Athens or any other women.

Berkowitz’s communications director Carolyn Hall said on Oct. 16 that the mayor “will not be answering further questions about purely private matters at this time.”

Anchorage Assembly Chair Austin Quinn-Davidson will become acting mayor, making her both the first woman and first openly gay person to serve in that position in Anchorage.