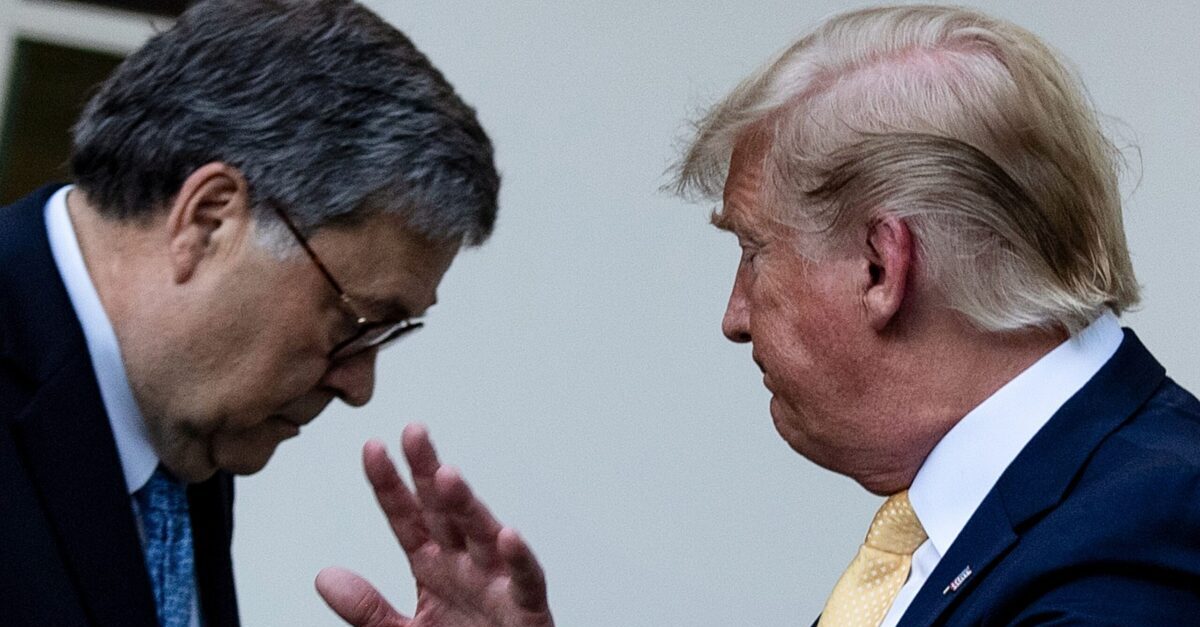 President Donald Trump, Attorney General Bill Barr and Department of Homeland Security (DHS) Secretary Chad Wolf are unlawfully trying to influence and disrupt the 2020 general election, according to a lawsuit filed in federal court on Wednesday.

“Trump and his political appointees are trying to prevent a free and fair 2020 election by intimidating and threatening eligible voters who want to vote, support, and advocate on behalf of certain political candidates, and express their political beliefs,” the complaint begins. “The Voting Rights Act, the Ku Klux Klan Act, and the United States Constitution forbid them from doing so.”

Mi Familia Vota Education Fund, a non-profit organization that works “to promote social and economic justice through increased civic participation,” filed the lawsuit in the U.S. District Court for the District of Columbia alleging that key figures in the Trump administration have run roughshod over various civil rights laws in a coordinated effort to depress turnout among anti-Trump voters.

The 53-page complaint outlines a series of the defendants’ verbal actions that are particularly egregious to the voting rights plaintiffs:

Defendants have threatened to send law enforcement to polling places; encouraged activist Trump supporters and white supremacist groups with a history of violence to go to polling locations to serve as ‘poll watchers’; proposed to delay the 2020 general election; publicly discredited voting by mail; sabotaged mail delivery for the purpose of making voting by mail less reliable; threatened to ban voting by mail or prevent mailed-in votes from being counted; and rejected the nation’s unbroken 231-year history of peaceful transfers of power by refusing to commit to honor or recognize the legitimacy of the results of the presidential election.

“Defendants have displayed a willingness to use the full force of the federal government to suppress constitutionally protected activity and incite private actors to do the same,” the filing continues. “They have deployed armed federal law enforcement agents to violently suppress peaceful assemblies and publicly encouraged vigilante violence against such demonstrators.”

According to the lawsuit, the offensive words and actions emanating from various executive branch officials “over the past five months” are “terrifyingly credible” threats that suggest a pattern and desire to illegally “sabotag[e] a free and fair election.”

Mi Vota argues in the lawsuit that these attacks began, quite literally, during the summer when federal agents were sent in to various jurisdictions across the country to rough up protesters taking part of the largest racial justice demonstrations in U.S. history following the Minneapolis Police killing of George Floyd in late May.

“These demonstrators largely have voiced support for the slogan or movement ‘Black Lives Matter,’ and many have voiced their opposition to President Trump, his administration, and his statements and policies with respect to police brutality,” the complaint notes. “A substantial number of these demonstrators also have emphasized the need for attendees to register to vote for the 2020 general election and actually vote when the time comes. The vast majority of the people assembling in these demonstrations have been peaceful and law-abiding.”

And, according to the lawsuit, Trump and his subordinates have responded to those dissenting views with politically-motivated use of state violence.

“Defendants Trump, Barr, and Wolf have threatened and conducted armed attacks on these assemblies,” the complaint alleges. “In some instances, these three Defendants deployed armed federal agents in unmarked clothing—lacking any uniforms or insignia that would enable citizens to identify their agencies or even ascertain that they were lawfully authorized law enforcement officers—into the streets to break up the assemblies and detain demonstrators, sometimes by violent means.”

The lawsuit goes on to catalogue other “[i]ntimidating statements” made by the defendants which have allegedly “encourag[ed] vigilante violence and intimidation against citizens engaging in public speech and assembly” such as support for police brutality, armed right-wing vigilantes, the Proud Boys street gang, and so-called “militia” members like accused murderer Kyle Rittenhouse.

“Trump, Barr and Wolf have repeatedly threatened further armed attacks against citizens engaging in public speech and assembly,” the complaint alleges. “They have also repeatedly publicly encouraged third parties to engage in violence or other forms of intimidation against citizens.”

Secondary and tertiary areas of focus explored in the lawsuit relate to the administration’s well-documented efforts to cast aspersions about the security of vote-by-mail elections and related efforts to undermine the delivery of U.S. mail in general.

With those actions combined, and more, the plaintiffs claim the government defendants have evidenced a “pattern of conduct” intended to overwhelm the administration and integrity of the 2020 general election.

“The pattern of conduct described above has had, as a foreseeable impact, an objectively intimidating effect on eligible voters,” the complaint continues. “Many Americans have been intimidated by this conduct…to the extent that it has discouraged their plans to register to vote, to vote, or to conduct voter registration, persuasion, or mobilization activities at public assemblies.”

The plaintiffs are seeking declaratory relief that the defendants have serially violated federal law and the U.S. Constitution, several injunctions barring the defendants “from deploying armed federal law enforcement agents” in ways that might influence the election, and specific injunctions that bar the 45th president from making incendiary statements regarding the election to his supporters–including through the use of his Twitter account.