5-Year-Old Child in Arizona Killed His Mother After Accidentally Shooting Her in the Chest With Handgun: Police 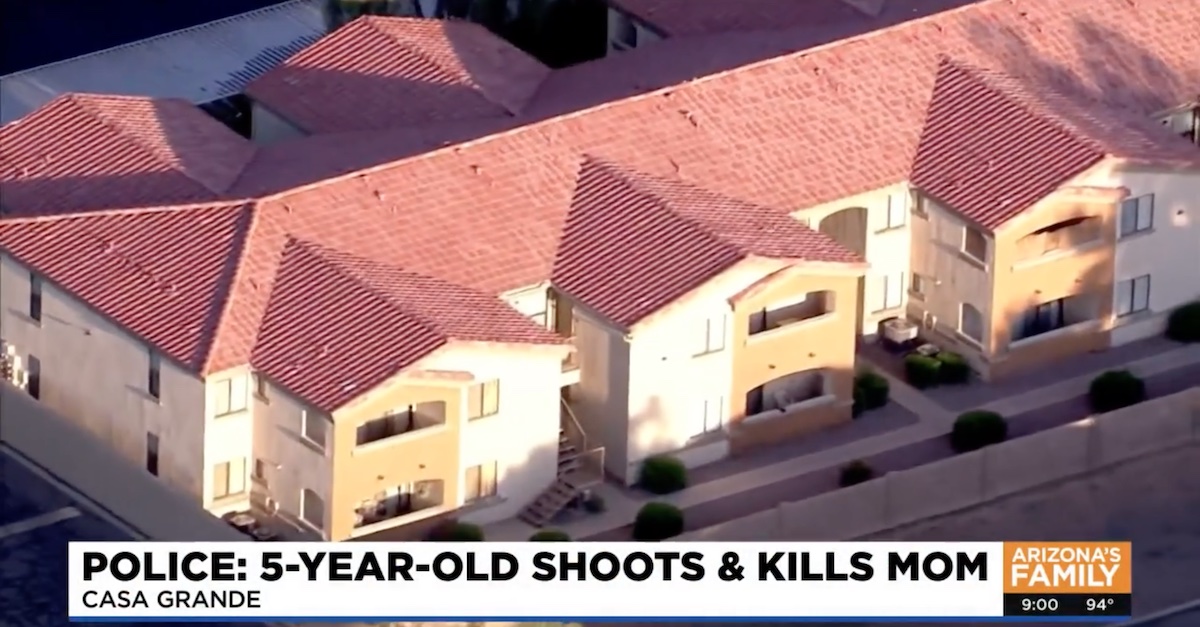 The Colony Apartments in Casa Grande, Ariz., where Michele Cox was shot dead on Friday.

A mother in Arizona died on Friday after her 5-year-old son accidentally took hold of a firearm and fatally shot her in the chest, local law enforcement authorities said.

According to a press release from the Casa Grande Police Department, officers were dispatched to a residence at The Colony Apartments, located at 351 North Peart Road in Casa Grande after receiving a 911 call about a shooting on the morning of Sept. 3 at approximately 6:20 a.m.

The department said that officers arrived on the scene a short while later and discovered that 38-year-old Casa Grande resident Michele Cox was severely injured after suffering what appeared to be a single gunshot wound to the chest. Police also reported that Cox’s four children, who ranged in age from four to 12, and her 40-year-old boyfriend were all home at the time. None of the other occupants in the home appeared to have suffered any injuries.

First responders began performing emergency life-saving procedures and Cox was air-lifted via helicopter to a local hospital in the Chandler area “with life-threatening injuries.” Unfortunately, doctors were unable to save Cox’s life and she was pronounced dead at the hospital the same day she arrived.

The investigation into the shooting is still ongoing, but detectives said they had determined that it was Cox’s five-year-old son who fired the bullet that ultimately ended her life. Police said that they “believe this was an accidental shooting” and noted that they recovered a handgun from the scene.

The department said that its investigators are “working closely” with the Pinal County Attorney’s Office to determine what, if any, crime may have occurred that contributed to Cox’s death. It added that the tragic incident should remind people about the dangers and responsibilities that come with gun ownership.

“This is a stark reminder that owning and safeguarding a firearm is a serious responsibility and should be a priority in anyone’s home or business, especially if children are present,” the Police Department said in a statement.

The Pinal County Attorney’s Office and the Casa Grande Police Department did not immediately respond to emails from Law&Crime seeking additional information on the incident.

Michael Cox, who is reportedly Michele’s brother, took to Facebook on Friday to mourn the loss of his sister.

“PLEASE PRAY FOR THE SOUL OF MY YOUNGEST SISTER…. MICHELE COX ….WHO WAS JUST SHOT AND KILLED IN ARIZONA …. SHE MOVED HERE WITH ME AND MY DAD TO PUT OUR FAMILY TOGETHER TO FINALLY HAVE A FAMILY DINNER. HER 5 KIDS, MY 4,” he wrote in a Facebook post.

Michael Cox did not immediately reply to messages from Law&Crime seeking information about any possible memorials or fundraisers.

It is unclear who owned the gun.