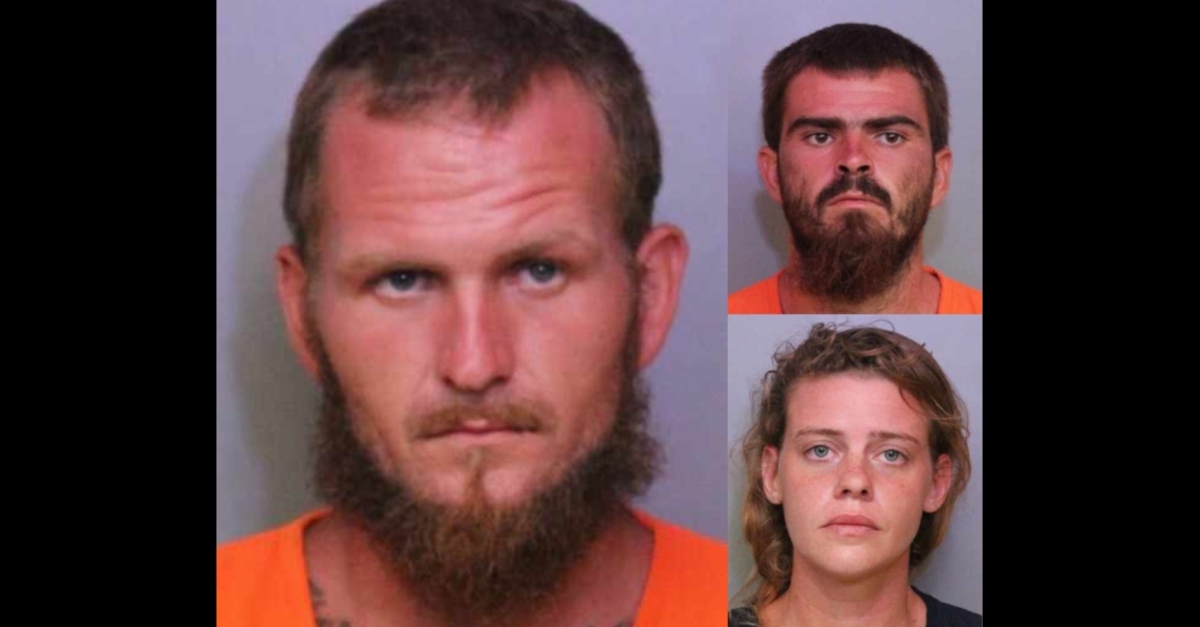 Three people have been arrested in connection with a recent triple murder in Frostproof, Florida. Tony “TJ” Wiggins, 26, is accused of being the triggerman. His girlfriend Mary Whittemore, 27, and his brother, William “Robert” Wiggins, 21, were there when the homicides occurred, deputies say. Authorities also say the defendants allegedly made a pretty hefty McDonald’s purchase after the killings of Brandon Rollins, 27, Keven Springfield, 30, and Damion Tillman, 23.

Polk County Sheriff Grady Judd previously described the Friday slayings as a “vicious” murder. The victims had gone night fishing using two trucks for conveyances. They were then killed. According to deputies on Wednesday, a Dollar General bag and receipt were found in Tillman’s truck. The paper was dated the night of the slayings. Investigators reviewed surveillance footage showing Tillman making purchases. A clerk told authorities that Tillman was a frequent customer.

Judd said Wednesday that local tips lead them to TJ Wiggins — not because of any first-hand knowledge of the slayings, but because he had such a “violent” reputation in the area. By his current age, 26, he’d racked up 15 convictions and two prison stays. According to the official statement, this defendant and brother William are seen on the Dollar General video. Whittemore was also in the store, Judd said, giving officers more than a mere whiff of suspicion or rumor from which to operate.

3 Arrests made in triple homicide

Sheriff Grady Judd is giving an update on 3 arrests made in the triple homicide that occurred on Friday, July 17th in the unincorporated area of Frostproof. Click here to read the news release https://tinyurl.com/y2h3u68e

Detectives said they executed a search warrant at a travel trailer where Tony Wiggins and Whittemore lived. (William Wiggins lived in another trailer on the same plot, deputies said.) Authorities claimed to find rifles, shotguns, and ammunition. They initially arrested Wiggins on firearms charges because he was a convicted felon. Some ammo at the residence was the same type as that fired at the murder, authorities said.

Authorities claim Whittemore bought that ammo for her boyfriend on July 9. Surveillance footage put both of them at the scene of the purchase, detectives said.

According to officials, all three defendants contradicted each other or were inconsistent with one another. Whittemore, however, allegedly admitted to buying the ammo and being with the brothers on Friday night.

As for William Wiggins, he admitted to seeing Tillman at the dollar store Friday while standing in line behind the victim with his brother TJ, deputies said. TJ Wiggins allegedly got his brother to follow the victims while on the road. This account also revealed a possible motive in the slayings: Tony Wiggins allegedly believed Springfield stole a truck from him.

Robert followed the trucks to Lake Streety Road in Frostproof. Robert stayed in the truck with Whittemore, while TJ got out and confronted Keven Springfield, punching him and yelling at him, accusing Keven of stealing his truck. Brandon Rollins and Damion Tillman get out of their truck, and TJ continues to scream at all of them. Robert told detectives he watched as TJ shot all three victims. TJ then asked Robert to help him put Damion into the back of one of the trucks.

The defendants allegedly ordered 10 double cheeseburgers and two McChicken sandwiches from McDonald’s after the murders. They ate at home, according to this account.

“Neither Tony Wiggins nor Mary Whittemore are cooperating with detectives,” deputies said.

It is unclear if the defendants have attorneys in the murder case. A first appearance is scheduled for Thursday, 1 p.m. ET.

To donate by credit card, go to http://www.polksheriff.org/donate and choose “Other” and type in “Frostproof Homicide Victims’ families.”

All funds received & designated as such will be distributed to the families of these three victims.