A Dem Assemblyman Said Gov. Cuomo Is ‘Lying’ About Nursing Home Data. Today, Cuomo Accused Him of ‘Unethical, if Not Illegal’ Conduct. 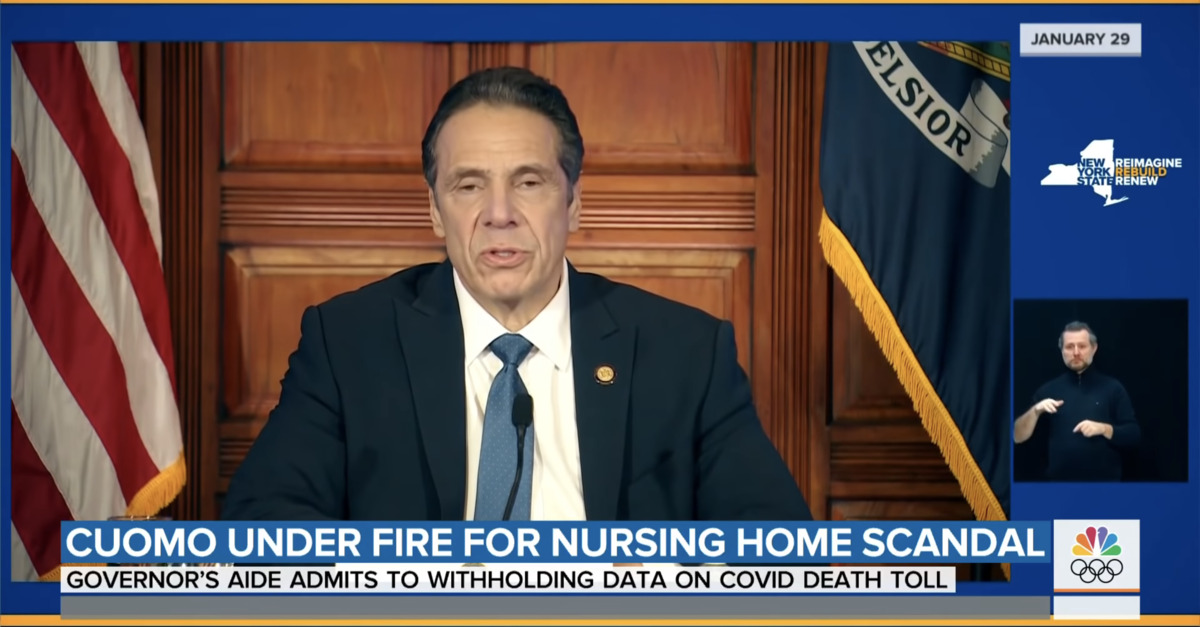 On Tuesday, New York State Assemblyman Ron T. Kim, a Democrat who represents Flushing, Queens—and whose uncle died from COVID-19 in a New York nursing home—called Cuomo out over the governor’s recent efforts to downplay the severity of the scandal and his administration’s responsibility for intentionally under-counting the number of deaths provided to state authorities and federal officials.

“I think the most immediate thing we need to do is rescind his extraordinary COVID powers that he obtained during this crisis,” Kim said during an appearance on Fox Business. “It’s clear that he’s made a couple of attempts to implicate the State Senate and the state legislature—the state legislative body—with some of these coverup attempts. Meaning, that he is trying to connect us to his coverups, saying that we’re part of it.”

Cuomo responded to Kim on Wednesday afternoon, saying his COVID grievances were just a pretext to continue a long-running feud over a bill targeting nail salons for wage theft. Kim originally supported the bill but later reversed course—saying that the Asian-dominated industry was being unfairly discriminated against.

“I believe it was unethical, if not illegal, and I believe it’s a continuing racket, because he’s still doing it,” Cuomo alleged, accusing Kim of taking part in a “pay-to-play scheme” over the nail salon issue.

Kim’s office quickly responded to the accusation, and even told the New York Times that Cuomo threatened to “destroy” him.

“On March 25th, the governor issued an executive order that sent COVID-19 positive patients into unprepared nursing homes,” Kim said in a statement provided to Law&Crime. “At the same time, he surreptitiously slipped legal immunity into our state budget bill for hospital executives and for-profit nursing homes at the request of powerful lobbyists like the Greater New York Hospital Association — a group that donated $1.25 million towards his campaign. All while his administration lied about the data.”

“This administration was grossly under-reporting nursing home deaths by as much as 50 percent and withholding information about the situation to federal and state officials — as move that benefited the same healthcare donors helping his campaign over the years,” Kim continued. “As legislators we have a duty to uncover the truth behind the nursing home deaths and the governor’s explanations do not add up. While he claims he was taking time to answer the Justice Department, we saw him gallivant around on a book tour and victory lap across prime time cable shows. Again, all while his top aide deliberately hid the information in fear of political and legal consequences.”

“[C]areful, your instinct for blatant deflection and distraction is showing,” State Sen. Alessandra Biaggi, a Democrat who represents the Bronx and Westchester County, tweeted in response to Cuomo’s broadside against her colleague from Queens. Biaggi and other Democrats, as well as Republican elected officials in the Empire State, have been relentlessly criticizing Cuomo over the nursing home “cover-up” in recent days.

According to original reporting by the New York Post, top Cuomo aide Melissa DeRosa admitted that the numbers provided to their own party on nursing home deaths were false.

From that phone call:

Earlier this week, Cuomo himself attempted to walk back that admission by blaming the media and accusing his critics of spreading conspiracy theories. During that widely-panned press conference, Cuomo also suggested that the legislature itself had signed off on receiving incomplete data.

Kim stopped just short of calling for Cuomo’s resignation during his television appearance, saying there is “a process” state officials are now considering and that the legislature should “thoroughly investigate” the extent of the Cuomo administration’s complicity. At the end of that process, however, Kim anticipated that Cuomo would need “to step down so we can heal properly.”

“We want transparency,” Kim said during the broadcast. “Because him just resigning today doesn’t mean that we can repeal all the damages—all the bad policy—that he put together the past ten months.”

“Our democracy, our state, shouldn’t function under the fears of one man,” the Queens Democrat added in response to a question about Cuomo’s grip over New York State and perceptions that he governs through the use of fear. “This is not about Andrew Cuomo This is not about me. This is not about any one politician. There are 15,000 families—including my own—who have lost loved ones in our nursing homes. They died alone, in pain, suffering, asking to go because their lungs were hurting so much.”

Hiding, lying, and misleading the public about life and death data is criminal. It is a crime against humanity and should be treated as such. https://t.co/rH7JkYv4t2