What Is the Defense Production Act? | Law & Crime 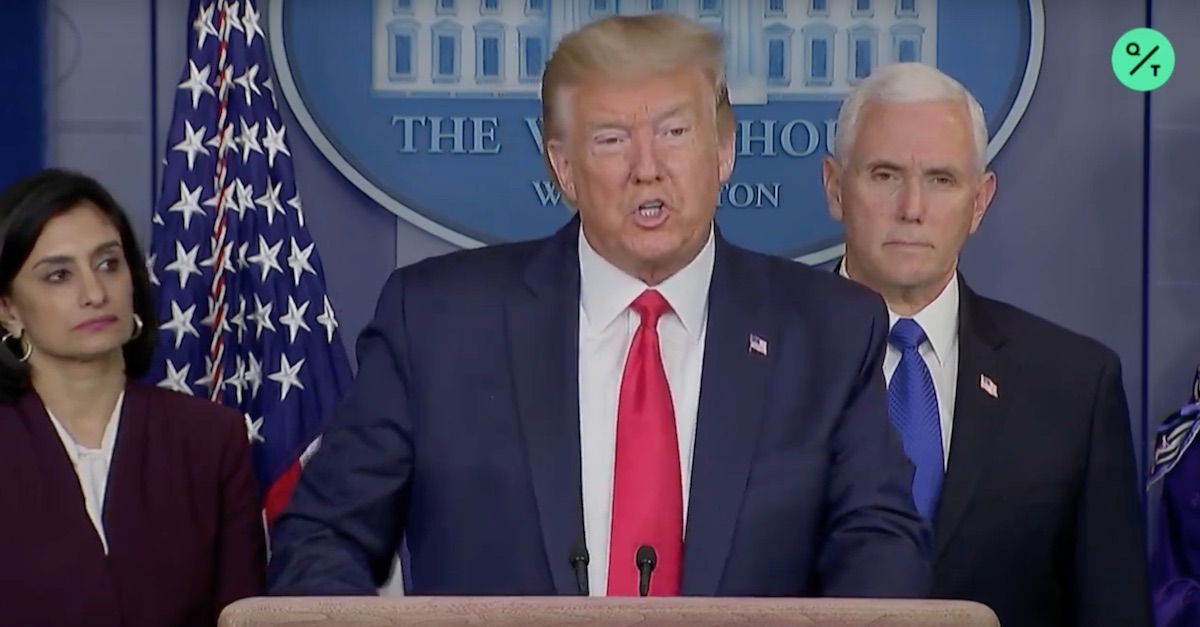 President Donald Trump said Wednesday during a news conference that as part of the United States “war” against novel and deadly coronavirus COVID-19 he was invoking the Defense Production Act (DPA).

The broad authority invoked here mobilizes–even coerces–the private sector in the production of emergency materials for the purposes of America’s national defense and national security, including in cases of natural or man-caused disasters.

Congress finds that—
(1) the security of the United States is dependent on the ability of the domestic industrial base to supply materials and services for the national defense and to prepare for and respond to military conflicts, natural or man-caused disasters, or acts of terrorism within the United States;

(2) to ensure the vitality of the domestic industrial base, actions are needed—
(A) to promote industrial resources preparedness in the event of domestic or foreign threats to the security of the United States;
(B) to support continuing improvements in industrial efficiency and responsiveness;
(C) to provide for the protection and restoration of domestic critical infrastructure operations under emergency conditions; and
(D) to respond to actions taken outside of the United States that could result in reduced supplies of strategic and critical materials, including energy, necessary for national defense and the general economic well-being of the United States;

(4) to meet the requirements referred to in this subsection, this Act [50 U.S.C. App. § 2061-2171] provides the President with an array of authorities to shape national defense preparedness programs and to take appropriate steps to maintain and enhance the domestic industrial base;

(6) to further assure the adequate maintenance of the domestic industrial base, to the maximum extent possible, domestic energy supplies should be augmented through reliance on renewable energy sources (including solar, geothermal, wind, and biomass sources), more efficient energy storage and distribution technologies, and energy conservation measures;

(7) much of the industrial capacity that is relied upon by United States Government for military production and other national defense purposes is deeply and directly influenced by—
(A) the overall competitiveness of the industrial economy of the United States; and
(B) the ability of industries in the United States, in general, to produce internationally competitive products and operate profitably while maintaining adequate research and development to preserve competitiveness with respect to military and civilian production; and

(8) the inability of industries in the United States, especially smaller subcontractors and suppliers, to provide vital parts and components and other materials would impair the ability to sustain the Armed Forces of the United States in combat for longer than a short period.

The invocation of the act comes five days after President Trump declared a national emergency, citing to the Stafford Act.

The 1988 law mobilized the Federal Emergency Management Agency (FEMA) and enable FEMA to provide disaster relief funding to state and local governments in order to support their response to the pandemic. The federal law is designed to allow the government to provide orderly systematic assistance to local governments in the aftermath of natural disasters.

The DPA mentions coordination with FEMA in the interest of stockpiling materials and in the construction, expansion or improvement and “geographic dispersal” of facilities for the purpose of national defense:

(7) to ensure that essential national defense requirements are met, consideration should be given to stockpiling strategic materials, to the extent that such stockpiling is economical and feasible; and

(8) in the construction of any industrial facility owned by the United States Government, in the rendition of any financial assistance by the United States Government for the construction, expansion, or improvement of any industrial facility, and in the production of goods and services, under this Act [50 U.S.C. App. § 2061-2171] or any other provision of law, each department and agency of the United States Government should apply, under the coordination of the Federal Emergency Management Agency, when practicable and consistent with existing law and the desirability for maintaining a sound economy, the principle of geographic dispersal of such facilities in the interest of national defense.