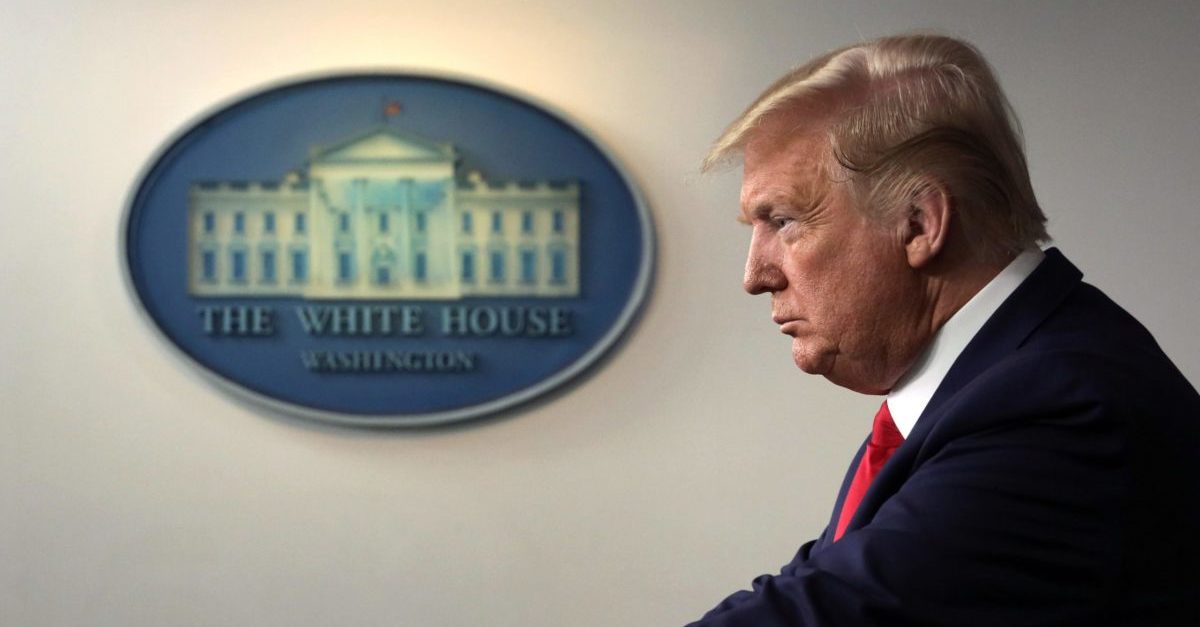 Those lobbying efforts have reportedly been successful.

According to the New York Times, and Trump himself, the White House has so far refused to access the commandeering authority outlined in the Defense Production Act of 1950 (DPA) for a whole host of reasons–including an ideological aversion to doing so.

Under the DPA, Trump could swiftly and legally requisition and commandeer any and all materials deemed necessary in the national fight against the Coronavirus. Perforce this means the White House has the power and authority to force companies into producing necessities like ventilators, N-95 masks, respirators and other forms of personal protective equipment (PPE).

Private industry thus far has not stepped up to meet demand and the White House is currently averse to forcing them into doing so. According to the Times, the source of that aversion can at least in part be traced to “heads of major corporations” and their lobbying:

The U.S. Chamber of Commerce and the heads of major corporations have lobbied the administration against using the act. They say the move could prove counterproductive, imposing red tape on companies precisely when they need flexibility to deal with closed borders and shuttered factories.

Mr. Trump and the director of his national economic council, Larry Kudlow, as well as [Jared] Kushner, were persuaded by those arguments, administration officials said.

Trump’s decision at the expense of a genuinely national response has enraged critics who fear his administration is doing far too little and for the wrong reasons.

Sen. Ted Cruz (R-Texas), in an unusual objection to the White House’s current course of action, broke with his one-time political rival.

“I don’t want to see doctors having to make a choice of who gets to live and who has to die because they don’t have the equipment to save their lives,” Cruz said.

“You can’t build a ventilator overnight,” he said on a recent episode of his Verdict podcast. “And if we wake up two weeks from now and instead of 11,000 cases, we’ve got 200,000 cases or a million cases, it might be too late then.”

Trump’s usual partisan opponents also called for the president to use his broad authority under the DPA over concerns that industry left to its own devices was simply inadequate for the moment.

“The president of the United States must immediately, in the most urgent terms, utilize the Defense Production Act and make certain that we produce all of the gloves, the gowns and the masks that our medical personnel need,” Sen. Bernie Sanders (I-Vt.) said in a video released over the weekend. “This is a life and death situation. Because if our medical personnel go down, who’s left to treat the American people?”

“I’m calling on the Federal Government to nationalize the medical supply chain,” tweeted New York Governor Andrew Cuomo (D). “The Federal Government should immediately use the Defense Production Act to order companies to make gowns, masks and gloves. Currently, states are competing against other states for supplies.”

Politically disinterested public health organizations have also urged the president to actually use his power to combat the crisis.

An open letter from the American Hospital Association, the American Medical Association and the American Nurses Association on Sunday pleaded with Trump to force such action due to the strain the Coronavirus has had and will continue to have on the nation’s public health professionals and the fast-dwindling supply of resources.

That letter notes, in relevant part (emphasis theirs):

America’s hospitals, health systems, physicians and nurses urge you to immediately use the DPA to increase the domestic production of medical supplies and equipment that hospitals, health systems, physicians, nurses and all front line providers so desperately need. As COVID-­‐19 continues to spread throughout the country, these supplies are urgently needed to care for our patients and communities.

Still, however, the president has refused to budge. During a Sunday press conference on the Coronavirus, Trump directly and incorrectly trashed the DPA as being tantamount to full-on nationalization.

“We’re a country not based on nationalizing our business,” he told reporters–perhaps suggesting that the Chamber of Commerce and other major corporations had, to him, effectively won the battle of ideas.

On Monday night, flanked by Attorney General William Barr, Trump explained that he was activating one of the sections of the DPA–in an effort to crack down on hoarding and price-gouging of hand sanitizers and PPE.

The use of that section to increase Barr’s own law enforcement authority, however, is unlikely to allay concerns.

University of Texas Law Professor Steve Vladeck noted that while Trump himself has done little under the DPA, the president has, in fact, ceded his own authority to Health and Human Services Secretary Alex Azar.

“Presumably, *he* could act (if he wanted to),” Vladeck tweeted.

Many have criticized @realDonaldTrump for not following through on his invocation of the Defense Production Act.

But under the governing Executive Order, the relevant authority has been delegated to @SecAzar. Presumably, *he* could act (if he wanted to):https://t.co/BXrEbPoE9m pic.twitter.com/4QcbPi39iN

Some companies have come forward and committed to producing much needed PPE and other resources, but progressive Rep. Alexandria Ocasio-Cortez’s (D-N.Y.) former chief of staff Saikat Chakrabarti argued that there would be a serious deficiency if capital interests remained free of government coercion.

“Estimate is we need ~3.5 billion masks for healthcare workers alone over the next year,” he tweeted. “Trump is talking in thousands. These numbers = needing about 20 years to get the PPE we need. We need to ramp up PPE production/procurement/delivery by at least 100x if we want masks for all.”

Chakrabarti, who is now the president of left-wing think tank New Consensus, also referenced a national mobilization plan put forth by the organization in response to the Coronavirus pandemic and concomitant panic.

“Unfortunately, it’s been a long time since the federal government and the military have been asked to do anything like this,” the mobilization guidance–which relies heavily on the U.S. Army Corps of Engineers–says. “Without proper guidance, this new effort will go the way of recent efforts, such as Coronavirus testing, and drag on for months without success.”

As Trump leans into a so-called “bet” that industry will rise to the challenge absent government intervention by way of the DPA, it appears the once-promised national mobilization isn’t actually happening at all–at least for now. If it does, will it be too late?