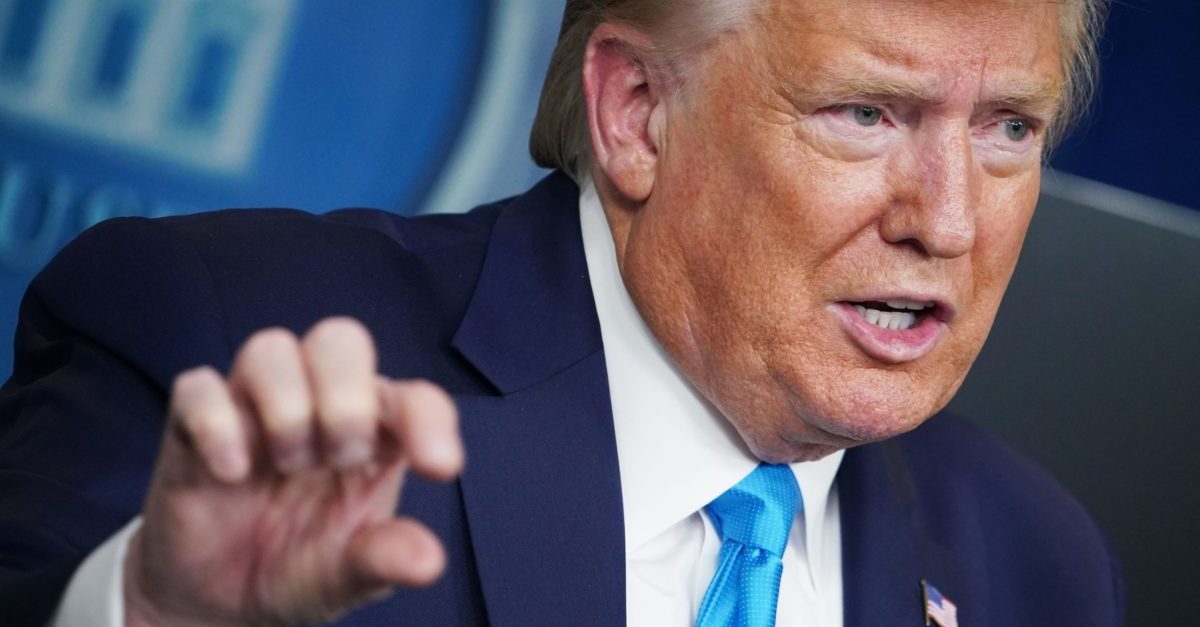 President Donald Trump on Wednesday tweeted that he was “immediately sending 100 [v]entilators to Colorado at the request of Senator [Cory] Gardner” to treat patients infected with COVID-19, the novel coronavirus which has caused a global pandemic. The tweet led to denouncements that Trump was playing politics with COVID-19 supplies. Our analysis begins, however, with federal law.

Will be immediately sending 100 Ventilators to Colorado at the request of Senator Gardner! https://t.co/Nj4EPxfZl6

Trump announced the move after previously saying it was not his administration’s job to function as an “ordering clerk” or as a “shipping clerk” for emergency medical gear. Despite federal law saying otherwise, Trump and his son-in-law advisor, Jared Kushner, have said states and local governments should be the primary point stockhouses for medical supplies in such a medical emergency.

Law&Crime has reported — many times over again — that federal law requires the Trump Administration to be both an “ordering clerk” and a “shipping clerk.” (The precise term in the law is “effective and timely supply-chain management.”)  The relevant section of the United States Code, passed mostly after the 9/11 attacks but updated because of the Coronavirus, more broadly requires the federal government to keep a “national stockpile” of medical supplies to “optimize the emergency health security of the United States” in the event of a “public health emergency.”

Given this legal backdrop, it is no surprise that Trump’s critics used the tweet to resurrect complaints that Trump is favoring so-called Republican states and/or Republican politicians. Many accused Trump and his administration of ignoring official requests from Colorado Gov. Jared Polis, a Democrat, for medical supplies. Polis has for some time called the situation in Colorado “dire” and “far worse than we imagined.” He said his state’s “comparatively smaller population” resulted in “staggering increases in cases and deaths … not fully registering in national models” which attempt to track the virus’s spread. Polis issued his requests for supplies on March 28th to Vice President Mike Pence through a letter carbon copied to Sens. Michael Bennet and Cory Gardner.  Sen. Bennet, another Democrat, was later among those who also officially petitioned the Trump Administration for supplies in a separate letter dated April 7th.  Sen. Gardner is the Republican to whom Trump gave a shout out in his tweet.

Read the letters from Polis and Bennet to Trump at the bottom of this page.

Though Trump said he was responding to a request by Gardner for ventilators, a search of Gardner’s website reveals neither a press release nor a letter requesting ventilators from the Trump Administration.  Law&Crime reached out to the office of Sen. Gardner to clarify whether he did, indeed, request ventilators.  We have not yet received a response.

Trump said during a daily coronavirus press conference early Wednesday evening that Gardner phoned in the request.  Trump made that comment after saying he wasn’t getting calls seeking ventilators.

“The ventilators, we’re all set; we have a lot to go if we want; but — I’m not getting calls where they need ventilators anymore, so we were right on those ventilators,” Trump said, despite a review of national stockpile supplies by the House Oversight Committee which suggested there were not enough ventilators.

“I just sent 100 ventilators to Colorado, and that was great.  A senator there, who’s a terrific senator, Cory, Cory Gardner, called me last night and said, ‘could you get 100 ventilators for Colorado,’ and we just sent them out, and they’ll be there very shortly,” Trump continued.  “It looks like we’re in great shape from the ventilator standpoint,” Trump later added.

“The numbers, they’re coming way down,” Trump said of COVID-19 illnesses, despite a CDC chart which explicitly warns the full tally of new infections after March 28th “may not yet be reported.”

The focus of Sen. Gardner’s COVID-19 efforts appears to be on economic matters involving farmers, the National Guard, FEMA grants, and similar concerns. Gardner also requested an investigation into why some ventilators in the national stockpile have apparently not worked properly.  Gardner lodged his demand for a review of those ventilators with the Principal Deputy Inspector General at the Department of Health and Human Services, Christi Grimm. She is the same official Trump trashed on Monday for spearheading official documentation of medical supply shortages.

Gardner has also argued that rural hospitals should receive coronavirus-related support because they could take patients from stressed and crowded urban hospitals. Gardner, furthermore, has admitted that the national stockpile did not have enough material to combat COVID-19.

Some assessments indicate Gardner is at risk of losing his senate seat to Democratic challenger John Hickenlooper, Colorado’s former governor.  Others have ranked the Colorado senate seat occupied by Gardner as among those to watch this fall for a possible change in power.  Another poll says the majority of Americans — 55% — believe the federal government has done an increasingly “poor job” of dealing with the coronavirus.

With this as a backdrop, Gardner promptly thanked Trump for sending the ventilators.

Thank you @realDonaldTrump, 100 ventilators and approval of our National Guard assistance is outstanding news for Colorado.

Coloradans are standing together as we get through the #COVID19 pandemic, even if we have to stand six feet apart. https://t.co/0d26KtMeEM

The criticism of the president was typically fast and furious.

So, when a Democratic governor makes the request weeks ago, nothing? We just have to hope we have a Republican senator up for reelection to get attention?

This Administration is corrupt to the core. https://t.co/WlV7mRM7EJ

Are these the same ventilators you seized less than a week ago? Are we supposed to sing your praises? When pigs fly…https://t.co/pvSOUZAz6U

The Governor of Colorado has been pleading for ventilators for days, but this sociopath is now saying he’s sending them at the request of Senator Gardner. Playing politics with people’s lives.

Hickenlooper is up by 13 points in the race for the Senate in November. trump is just trying to prop up his sycophant.

The Democratic governor of Colorado has been pleading for ventilators for days, but Trump says he’s sending them at the request of their Republican senator https://t.co/rKvLGxzpNp

Gardner voted against impeaching Trump in February. In a statement at the time, he decried “partisan accusations, investigations, and endless acrimony.”

[Editor’s Note:  This piece has been updated to reflect Trump’s comments during his Wednesday coronavirus briefing.  It has also corrected an erroneous reference to Trump’s tweet as occurring on Tuesday, April 8th.  The tweet was Wednesday, April 8th.]