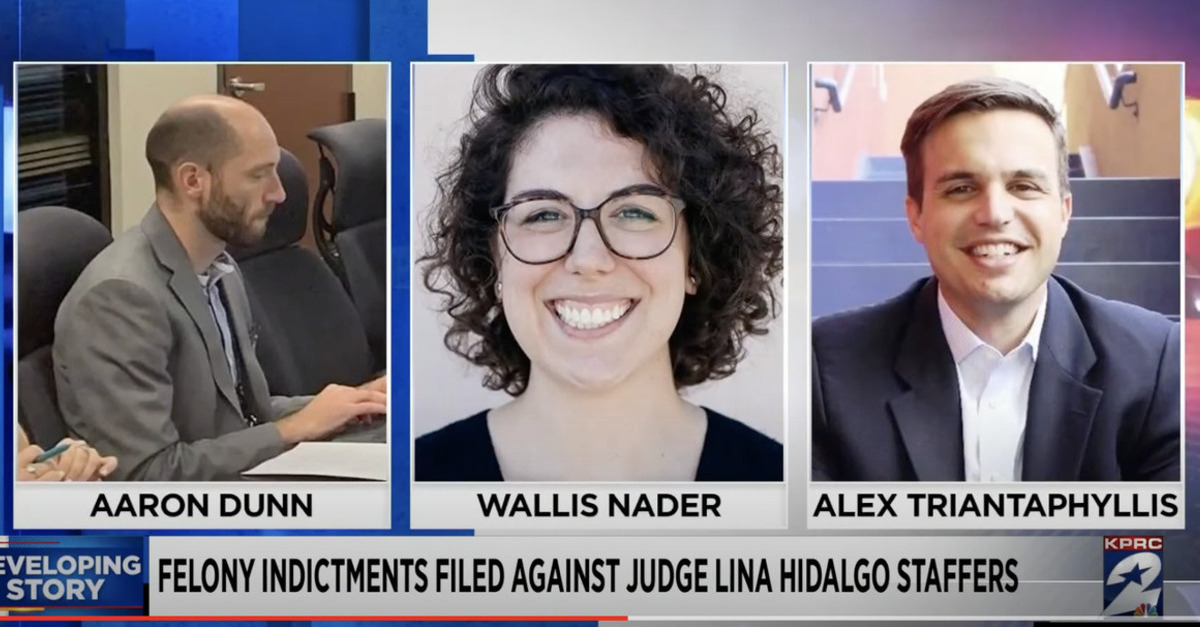 Three top staffers for a high-profile Texas Democrat were indicted Monday on felony charges in connection with the alleged rigging an $11 million bid for COVID vaccine-outreach services.

Judge Lina Hidalgo serves in Harris County, Texas, the heavily-populated county that includes the City of Houston. Although Hidalgo is called a “judge,” her position functions primarily as the county’s chief executive, and she oversees a sizable budget.

Hidalgo’s chief of staff Alex Triantaphyllis, policy director Wallis Nader, and former senior advisor Aaron Dunn, were investigated and indicted for allegedly tampering with government documents and misusing official information in connection with a controversial contract intended to reduce vaccine-hesitancy during the pandemic.

JUST IN: Felony indictments of misuse of official info and tampering have been filed against against three @HarrisCoJudge senior staffers—Aaron Dunn, Wallis Nader and Alex Triantaphyllis for their alleged roles in $11 million vaccine outreach contract controversy. #khou11 pic.twitter.com/ZzCYKUmnsc

Hidalgo’s office faced intense criticism over its decision to award an $11 million contract in June 2021 to Elevate Strategies for “vaccine outreach.” Elevate Strategies was started in 2019, and is run by Democratic political consultant Felicity Pereyra. Pereyra was Hillary Clinton’s analytics director for the 2016 presidential campaign. Elevate Strategies reportedly had little to no staff until recently.

When the contract with Elevate came under scrutiny, Hidalgo opted to cancel it in September 2021 after $1.4 million had been paid to Elevate Strategies. At the time, Hidalgo told press the decision was made because the contract was “being politicized” and “getting in the way of getting people vaccinated.”

In March 2022, the contract became the subject of an official investigation. Local Texas media reported that documents showed that Elevate Strategies was given the contract before invitations to bid had even become public. Communications between Hidalgo’s office Elevate Strategies reportedly show that the company was awarded the hefty contract without standard procedures having been followed.

Hidalgo has been called a “rising star” in the Democratic Party after she defeated an 11-year incumbent to become Harris County Judge in 2018. After taking office, Hidalgo expanded the county’s voting budget from $4 million to a $31.4 million machine; as a result, she was credited with making enormous strides increasing voter turnout.

When questioned about the propriety of the contract award by fellow members of county government, Hidalgo said during remote proceedings, “Bring it on, because there is nothing here.”

Law&Crime did not immediately receive a response to request for comment from counsel for the parties.